“The Old Order Is Disappearing”: How Progressive Grassroots Movements Are Sweeping the U.K. & U.S.

Pundits and Democratic heavyweights were stunned when 28-year-old Democratic Socialist Alexandria Ocasio-Cortez beat 10-term incumbent Representative Joe Crowley in New York in last month’s Democratic primary. We speak with George Monbiot, British journalist and author, and Katrina vanden Heuvel, editor and publisher of The Nation, about what her win means for the future of the Democratic Party and the progressive movement.

AMY GOODMAN: And, George Monbiot, when President Trump was asked about the protests in Britain today at his 40-minute news conference in Brussels, before he flew off to you—well, not exactly you and not exactly Sheila, but before he flew off to Britain, where he’ll also be going to the—his Turnberry golf course, which he talked about, did a little advertisement for and also said he had one in Ireland—and we have to remember that two years ago, when he went to that golf course the day after the Brexit vote, he was met by a young comedian. No one knew who he was at the time. He got on the golf course, and just as Trump was about to speak, he was wearing a Turnberry sweater and tie, and he said, “You can get Trump’s balls”—he was holding up golf balls—”right behind me at the pro shop.” And he started to throw these golf balls out to the people, and they had swastikas on them. But Trump, today, when asked about the British protests, said—well, he started talking about the U.S. elections and talked about how significant they were, that he was elected. He once again lied and said that he got Wisconsin, even Reagan did not win Wisconsin—which he did. But you’ve been looking at progressive politics in the United States. And what do you say to him saying—well, Trump said, “I won”?

GEORGE MONBIOT: Well, that’s part of the problem with the system that we’ve got. Your president or government can look back to a single decision, made once by the people, and then justify everything that takes place following that. This is why, I feel, we desperately need to temper representative democracy with participatory democracy, so that we have an ongoing role in decision-making, and they can’t just say, “I won, so I can do what I want for the whole of the rest of my term.”

Now, what I see going on in America is very hopeful. It’s very similar to what’s happened with the Labour Party here in the U.K., in that there is a sweeping grassroots movement which is finally taking the Democratic Party by the lapels and shaking it and saying, “Hey, guys, sticking with neoliberalism, sticking with policies which were scarcely distinguishable from those of the Republicans, is not going to cut it, is not going to work electorally and is not going to work in terms of the policy changes that we need to see.” And the election of Alexandria Ocasio-Cortez, which is thrilling in its own right, turns out to be just part of a much bigger movement, a movement which goes right back to the beginning of 2017 with the foundation first of Brand New Congress, then with the Justice Democrats, who are now fighting similar battles right across the union.

And we in the U.K. are watching this and seeing the beginnings of what we think could be a very major global transformation: the use of a combination of networked mass movements; big organizing tactics of the kind pioneered during the Sanders campaign, picked up over here in the U.K. by the Corbyn campaign; a real rootedness in community and awareness that it’s got to be genuine grassroots. You’ve got to build up strong communities, even on the nonpolitical side, but out of those—that participatory culture, you develop a politics from which people are not going to back down. You allow people to articulate the changes that they need, and then feed that up into the electoral process. And the long-term hope, as we perceive it from over here, is that the transformation of the Democratic Party this promises will lead, first of all, to some very significant Democratic wins and, eventually, to the repeal of Citizens United, a fair political funding system and a much more progressive and inclusive political system in the U.S. and elsewhere in the world.

AMY GOODMAN: You’re talking about Alexandria Ocasio-Cortez, who beat the number-four most powerful Democrat in the House, Joe Crowley, has rocked the Democratic Party. You also have written about her, as well, Katrina.

KATRINA VANDEN HEUVEL: I mean, I couldn’t say it better than George just did. I think that we’re witnessing—the old order is disappearing. The new one is not yet born, but it is very powerful. AOC, as I call her, is one example of it. She spoke of movement meets establishment. What’s thrilling also are the issues that are surfacing, where you have Medicare for all now, higher free education. You have a Green New Deal. You have abolition of ICE. And, you know, Alexandria also had a very strong peace economy platform, which speaks to the Democratic Socialist wave. What she said when she won that night, that extraordinary night, was movement meets establishment. And George is right: It’s not just the candidates, which is exciting, but there are movements outside the Democratic Party which are competing to take over the Democratic Party. That will be a long struggle, but we are on the cusp of extraordinary changes. And I would date it from the failure of the Democratic Party to really deal with the financial crisis of 2008, which we’re on the 10th anniversary of soon.

AMY GOODMAN: And we have to leave it there. We want to thank Katrina vanden Heuvel of The Nation; George Monbiot, the British journalist; and Sheila Menon, organizer behind the Trump baby blimp. And we’ll continue to cover this.

In breaking news, the Justice Department has reopened a murder investigation into the death of Emmett Till, the 14-year-old African-American boy from Chicago whose killing in the summer of 1955 galvanized the civil rights movement. The Justice Department told Congress it reopened its inquiry, quote, “based upon the discovery of new information,” without elaborating. Emmett Till, killed August 28, 1955, while visiting family in Money, Mississippi. Till’s mother held an open-casket funeral for her son to show the ravages of racism and the brutality of bigotry. 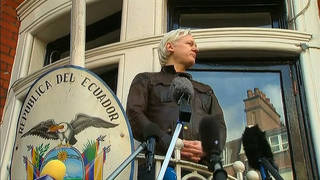