As more than 900 children remain separated from their parents, we speak to Dr. Mona Hanna-Attisha, a pediatrician from Flint, Michigan, who helped expose the dangerous levels of lead in the city’s drinking water after testing blood lead levels in children.The Iraqi-American doctor has just published a new book titled “What the Eyes Don’t See: A Story of Crisis, Resistance, and Hope in an American City.” We talk to Dr. Mona Hanna-Attisha about Trump’s immigration policies, the Muslim travel ban and her family history.

AMY GOODMAN: This is Democracy Now! As more than 900 children remain separated from their parents, we turn to Dr. Mona Hanna-Attisha, a pediatrician from Flint, Michigan, who helped expose the dangerous levels of lead in Flint’s drinking water after testing blood lead levels in children. In 2016, Time magazine named Mona one of the 100 most influential people in the world. The Iraqi-American doctor has just published a new book titled What the Eyes Don’t See: A Story of Crisis, Resistance, and Hope in an American City. Later in the show, we’ll discuss the Flint water crisis with her, but I first asked her about the health impacts of migrant children being separated from their families.

DR. MONA HANNA-ATTISHA: As a pediatrician, I applaud my pediatrician colleagues who have been very vocal on this issue. Separating children from their parents is a form of trauma. We call it toxic stress, when you have such an early childhood trauma that it actually disrupts your brain development. It causes irreparable harm. These children will suffer from long-term mental health conditions that may be impossible to fix later on. It is absolutely not recommended, not only speaking as a pediatrician, speaking as a mom, speaking as a human.

And this is the same kind of toxic stress that we’ve actually framed our water crisis in Flint. Not only was it exposure to lead, but it was exposure to all of this adversity and the trauma of the crisis, being betrayed by government. This is the same kind toxic stress children who are in schools, and there’s active shooters, feel. This is all traumas. And it makes you only wonder: How do we value our children, if we are pulling them apart at the border, if we are exposing them to toxins in communities, if we have, you know, incredibly high rates of childhood poverty, the highest of all industrialized countries? And look at our gun violence. I think this is a reckoning for many of us, especially those of us who are pediatricians who know the science of what this does to children.

AMY GOODMAN: And separating children at the border is really intimately linked to the travel ban that President Trump has imposed. About a year ago, over a year ago, you wrote an op-ed piece in The New York Times, its headline, “Will We Lose the Doctor Who Would Stop the Next Flint?” You write in it, “Eighteen months ago, as a pediatrician here, I discovered that the untreated tap water corroding the city’s plumbing was poisoning our children with lead. State officials called my science faulty and accused me of creating hysteria. But I was right and persisted, and with brave parents, pastors, journalists and scientists demanded answers until this continuing public health disaster was finally acknowledged.”

You go on, a few paragraphs down, to say, “But as a first-generation Iraqi immigrant, and as a doctor whose job is to train other doctors, many of them immigrants themselves, I fear that the American dream is corroding. I worry about the impact of President Trump’s travel ban, for the moment blocked by court order, and how the Republican Congress will handle immigration issues.” Take it from there. Talk about your own personal experience, how you ended up in this country.

DR. MONA HANNA-ATTISHA: Absolutely. And this is definitely a big part of my book, is my immigrant story. So, we came to this country when I was 4. We are Iraqi-American. I was born in the U.K., but my parents were fleeing Iraq. It was a time that Saddam Hussein was rising in power. My parents are leftists, progressives. They saw what was happening to their country. They knew if they went home, that they would face a very, very different future. So we came to this country fleeing dictatorship and tyranny and fascism. We came to this country looking for democracy and freedom and opportunity.

And it makes you wonder of that other—those other 4-year-olds, those other little kids who we are literally closing our doors upon. What are we going to miss out? How many Nobel Prize winners from the U.S. have been immigrants recently? The majority were immigrants. We are all essentially immigrants, except the Native Americans and those who were forcibly brought here. It is absolutely frightening to see what our future holds with these policies.

AMY GOODMAN: Finally, you also give us major history lessons in your book, your book titled What the Eyes Don’t See. And you talk about the sit-down strikes of Flint in the 1930s and other collective actions.

AMY GOODMAN: Talk about that here.

DR. MONA HANNA-ATTISHA: So there is quite a bit of history in my book, because we often do not see that history as we walk through the places that we live, yet they frame our actions, and they frame our current state. So, Flint—many people don’t know Flint is the birthplace of the middle class, the birthplace of the American dream. Not only was General Motors born there, but it was the actions of brave, heroic, disobedient workers who demanded their fair share of the economy and sat down for 44 days in car plants and birthed the United Auto W—UAW, and it was their brave actions that really informed wages across the country. At one point, Flint actually had the highest per capita income in the country, some of the lowest unemployment rates, some of the best public health indices, because of the actions of these workers. So we need to know that history, because, definitely, it informs Flint, but it informs really all of our actions. So there’s quite a bit of public health history. There’s a lot of lead history, the evil lead history, in there.

AMY GOODMAN: And continuing on the public health history and the activist history of the 1930s, you yourself have a personal connection. If you can talk about your—was it your great-uncle?

DR. MONA HANNA-ATTISHA: Yeah. My great-uncle was a freedom fighter. He came to Cambridge in the 1930s, to MIT.

DR. MONA HANNA-ATTISHA: Nouri Roufeal. He came to and was so engaged in the resistance that was happening at Cambridge. He came on a scholarship. He actually lost the scholarship because he was too involved in activism, and went back to Iraq and started a leftist organization in Iraq and then fought all over the world. He went to Palestine to fight for independence from England, and then he went on to Spain to be one of the freedom fighters in the International Brigade fighting fascism and Franco. His work was all about a borderless cause. You know, he would go anywhere to fight for freedom. And this was, amazingly, my great-uncle. So, there’s definitely some genetics in this work.

AMY GOODMAN: We’ll be back with Dr. Mona Hanna-Attisha in 30 seconds.

As Death Toll Rises in Flint, Dr. Mona Hanna-Attisha on Her Fight to Expose Lead Poisoning in City 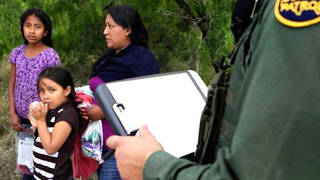