Mother of NSA Whistleblower Reality Winner: My Daughter Was “Nailed to the Door” by the Trump Admin

NSA whistleblower Reality Winner has been sentenced to five years and three months in prison—the longest sentence ever imposed in federal court for leaking government information to the media. Twenty-six-year-old Reality Winner is the first person to be sentenced under the Espionage Act since President Trump took office. Her sentencing Thursday came after she pleaded guilty in June to transmitting a top-secret document to a news organization. She had faced up to 10 years in prison. We speak with her mother, Billie Winner-Davis.

AMY GOODMAN: NSA whistleblower Reality Winner has been sentenced to five years and three months in prison—the longest sentence ever imposed in federal court for leaking government information to the media. The 26-year-old Reality Winner is the first person to be sentenced under the Espionage Act since President Trump took office. Her sentencing Thursday came after she pleaded guilty in June to transmitting a top-secret document to a news organization. She had faced up to 10 years in prison.

This is Bobby Christine, U.S. attorney for the Southern District of Georgia, speaking after Winner’s sentencing.

BOBBY CHRISTINE: The sentence rendered today is the longest received by a defendant for an unauthorized disclosure of national defense information to the media. It appropriately satisfies the need for both punishment and deterrence, in light of the nature and seriousness of the offense. … Winner’s purposeful violation put our nation’s security at risk. … She claimed to hate America. When asked, “You don’t really hate America, right?” she responded, “I mean, yeah, I do. It’s literally the worst thing to happen on the planet.” She was the quintessential example of an insider threat.

AMY GOODMAN: Reality Winner was arrested by FBI agents at her home in Augusta, Georgia, June 3rd, 2017, two days before The Intercept published an exposé revealing Russian military intelligence conducted a cyberattack on at least one U.S. voting software company just days before the U.S. presidential election in 2016. The exposé was based on a classified NSA report from May 5th, 2017, that shows the agency is convinced the Russian General Staff Main Intelligence Directorate, or GRU, was responsible for interfering in the 2016 presidential election.

Earlier this morning, President Trump tweeted about the case, saying, quote, “Ex-NSA contractor to spend 63 months in jail over 'classified' information. Gee, this is 'small potatoes' compared to what Hillary Clinton did! So unfair Jeff, Double Standard.” He was referring to Attorney General Jeff Sessions, who he has been attacking over the last 24 hours.

For more, we’re joined by three guests who were in the courtroom Thursday during Reality Winner’s sentencing. Joining us via Democracy Now! video stream is Billie Winner-Davis, mother of Reality Leigh Winner. She’s joining us from Augusta, where Reality Winner was sentenced. In Atlanta, Georgia, Kevin Gosztola is managing editor of Shadowproof Press. He has been covering Reality’s case and has covered several whistleblower trials, including that of Chelsea Manning. He was in the courtroom on Wednesday. And in Washington, D.C., James Risen is with us, The Intercept's senior national security correspondent, a best-selling author and a former New York Times reporter, also serves as director of First Look Media's Press Freedom Defense Fund.

We welcome you all to Democracy Now! Let’s begin with Reality’s mother, Billie Winner-Davis. You were in the courtroom with your daughter. Can you explain your—can you share your reaction to her plea deal and sentencing?

BILLIE WINNER-DAVIS: Well, I think yesterday my initial reaction to the whole proceeding and the judge’s sentencing was, I was relieved that the judge did approve of the plea agreement that the parties had reached for the 63 months in prison with a 3-year supervised release. Today I’m a little bit bitter. I’m a little angry. No, I should say I’m a lot bitter today. Just processing it, knowing that she is going to be serving the longest prison sentence for this, hearing Mr. Christine’s comments about her, hearing, you know, again, that she has to be the deterrent for anyone else in America who would think of warning us, of blowing the whistle on something important like this, it’s just—it’s really hard. It’s hard, as her mother, to have to experience this and to know that she’s going to be the one who is going to set the example. She is that first leaker under Trump’s administration. She’s the first one that they intended to nail to the door as a message to others.

AMY GOODMAN: And can you share Reality’s statement yesterday before the judge?

BILLIE WINNER-DAVIS: Reality had a pretty lengthy statement that she had worked on. She basically—she let the judge know a little bit about who she was. She did share with the court that she was grateful for the professionalism that everyone had shown to her, the respectful environment. She let the court know, you know, a little bit about who she was, why she went in to serve her country. She basically went through her childhood, her relationship with her father, how 9/11 had affected her as a child, how she followed her stepbrother’s footsteps to go into the Air Force to be a linguist. She wanted to serve her country. She really had the desire to protect and defend and serve her country. I think she was trying to, you know, let the court know that although in some statements with texting with her sister she did indicate that she hates America, that that’s not really who she was. And so, she was really letting the court know a little bit about herself.

AMY GOODMAN: How long has she been in jail, Billie?

BILLIE WINNER-DAVIS: She’s been in jail for about 15 months.

AMY GOODMAN: Will that be part—will time served be part of that five—more than five years in jail?

BILLIE WINNER-DAVIS: Yes, it’s my understanding that that time served will count toward her sentence, day for day.

AMY GOODMAN: When she came into the courtroom, you heard her shackles?

BILLIE WINNER-DAVIS: Yes. That was—that was really difficult. That’s the first time that we’ve heard that, I think, because typically she’s been in the courtroom downstairs, and there’s carpeting. You know, you kind of hear her shuffle. But yesterday it was very quiet when they brought her in. And when she went up to the podium, you could actually hear her leg shackles hit the floor and make that clanking sound. It’s really striking that every time that Reality has appeared in court, she has to wear the orange inmate jumpsuit. She is shackled. She is very much presented as a criminal in that court. They dehumanize her, and they portray her as a criminal.

AMY GOODMAN: Now, your daughter Reality will be incarcerated at the Federal Medical Center, Carswell in Fort Worth, Texas. Why a medical center?

BILLIE WINNER-DAVIS: That is only the recommendation at this time. That’s the recommendation that her defense team is making for her, the recommendation that a psychiatrist is making for her. And the judge actually approved of that recommendation yesterday. Whether or not she’s placed there, we won’t know. That will be up to the Bureau of Prisons to decide. But we do feel like that facility will meet her needs. My daughter does suffer from severe depression. She does suffer from bulimia. This entire situation with her being incarcerated, her inability to really control her environment, has been very difficult on her. And we’re hoping that she is placed there, so that they can meet her needs and she can get the treatment that she needs.

AMY GOODMAN: And did you speak to her? Were you able to communicate with her yesterday?

BILLIE WINNER-DAVIS: Afterward, she called me when she was back at the jail. The defense team did ask the marshals if we could be allowed, you know, a brief visit with her yesterday at the courthouse. And again, we were denied. They make this request whenever they can. And again, the marshals will not permit us to be in the same room with her.

AMY GOODMAN: We’re going to break and then come back to this discussion. We’re speaking to Billie Winner-Davis. She is the mother of Reality Winner, who has just been sentenced to more than five years for releasing intelligence, leaking a top-secret document to The Intercept. When we come back, in addition to Billie Winner-Davis, we’ll be joined by Jim Risen. He is now at The Intercept. He’s a Pulitzer Prize-winning journalist. He himself has been prosecuted, under the Obama administration. And we’ll talk about that, as well. And Kevin Gosztola, longtime reporter, in the courtroom yesterday, he’ll be speaking to us from Atlanta. Stay with us.

James Risen: Reality Winner’s Sentence Is One of the Worst Miscarriages of Justice in Recent History

NEXTJames Risen: Reality Winner’s Sentence Is One of the Worst Miscarriages of Justice in Recent History 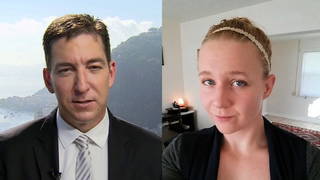