As Most Diverse Congress in History Takes Office, Dems Push to End Shutdown Without Funding for Wall

The 116th Congress made history Thursday, swearing in the most diverse group of lawmakers ever and more than 100 women in the House, including the first two Native American women, the first two Latina women from Texas and the first two Muslim women. The first-ever African-American women congressmembers from Connecticut and Massachusetts were sworn in, as was Colorado’s first-ever African-American member of Congress. The first-ever and now second female House speaker, Nancy Pelosi, and House Democrats sought to end the government shutdown as their first order of business, passing a package of spending bills that would reopen the federal government without meeting Trump’s demand for $5 billion for expanding the wall on the U.S.-Mexico border. We speak with California Rep. Judy Chu.

StoryJun 26, 2019AOC Joins Other Progressives to Vote Against Dems on Funding Bill for DHS, Call for Abolition of ICE

The first- and now second-ever female House speaker, Nancy Pelosi, and House Democrats sought to end the government shutdown as their first order of business, passing a package of spending bills that would reopen the federal government without meeting Trump’s demand for $5 billion for expanding the wall on the U.S.-Mexico border.

SPEAKER NANCY PELOSI: What we’re asking the Republicans in the Senate to do is to take yes for an answer. We have sent—are sending them back exactly, word for word, what they have passed. … So, we’re just saying it: “Let’s make it easy for you. Do what you have already done: open up government. Let’s have an adult conversation about how we protect our borders. And let’s listen to people who know what they’re talking about.” …

The president cannot hold public employees hostage because he wants to have a wall, that is not effective, not effective in terms of its purpose, not cost-effective in terms of what the opportunity cost it is of federal dollars to spend. And the president has said Mexico is going to pay for this. Come on, let’s anchor ourselves into reality. Mexico is not going to pay for this wall.

AMY GOODMAN: The White House immediately threatened a veto. On Thursday, President Donald Trump held a surprise press briefing, where he didn’t take questions but continued his call for a border wall, surrounded by ICE and Border Patrol officials.

PRESIDENT DONALD TRUMP: You can call it a barrier. You can call it whatever you want. But, essentially, we need protection in our country. We’re going to make it good. The people of our country want it. I have never had so much support as I have in the last week over my stance for border security, for border control and for, frankly, the wall or the barrier. I have never had anything like it in terms of calls coming in, in terms of people writing in and tweeting and doing whatever they have to do. I’ve never had this much support. And we’ve done some things that, as you know, have been very popular.

AMY GOODMAN: As the government shutdown moves into its 14th day, with 800,000 federal workers either being forced to work without pay or on furlough—and they won’t be paid—we go now to Capitol Hill, where we’re joined by Democratic Congressmember Judy Chu of California. She’s the chair of the Congressional Asian Pacific American Caucus. Congressmember Chu is also a member of the Committee on Ways and Means. Along with Democratic Senator Jeff Merkley of Oregon, she’s introduced the Shut Down Child Prison Camps Act. Her recent piece for the Pasadena Star-News is headlined “Shut down Trump’s child prison camp.”

Congressmember Judy Chu, welcome to Democracy Now! Congratulations on your swearing-in yesterday along with the most diverse Congress in U.S. history. Your thoughts being in that room and the comparison of the diversity—in color, religion, ethnicity, sexual identity—on the part of the Democrats versus the Republicans?

REP. JUDY CHU: Oh, it was just so incredibly exciting to be there with the now majority in Congress. You could see the stark difference just when you entered the room as the proceeding started. And that is, on the left side of the room, where the Democrats sit, there was tremendous diversity. We have a record number of women in Congress. Now there are over a hundred women in Congress, but most of them are on the Democratic side. But there is also tremendous diversity. We have the greatest number of Latinos, African Americans. And let me also say, we have the greatest number of Asian-Pacific Islanders elected to Congress now. We have gone from 18 to now 20 Asian-Pacific Islander members of Congress. But it is so exciting that we have now the first two Native American women in Congress and the first two Muslim American women in Congress in history. So the change is happening, but the change is happening on the Democratic side. And I am so proud of it.

Of course, the most exciting thing is that we now have our woman speaker, Nancy Pelosi, who once again makes history as our speaker, as our speaker for this incredible session that we have ahead of us.

AMY GOODMAN: Talk about the legislation you passed on the first day.

REP. JUDY CHU: The first day was to be able to change the rules so that we have greater transparency in Congress, and it was also to pass bills that would end the government shutdown.

On the rules issue, yes, unfortunately, since the last few congresses, since Republicans took over, we have had a lack of transparency. So our whole goal was to change it so that, for instance, we could have a bill 72 hours before it’s voted upon, so we can actually read it and contemplate it; so that we can have an end to these conflicts of interest, so, for instance, members of Congress cannot be on corporate boards; and also so that we can have greater diversity amongst our members, allowing religious headgear on the floor. So, those were our rules packages.

But the most important thing was that we do not continue the suffering of these federal workers, these 800,000 federal workers who either will not be paid or will be paid later and do not have a paycheck now. This is unnecessary suffering. We know that the Senate already passed a bill—in fact, we passed the very same bill that they gave to us, before Trump did a turnabout for his demand for $5 billion for the border wall. So, we passed two versions of our bills that will end this government shutdown. We know that there is a solution. We know that Trump promised the people that his border wall would be paid by Mexico. Now he’s trying to cheat the taxpayers by having the taxpayers pay for it instead. And that is wrong. That’s why we are going to send the bill back, and we are saying, “Trump, sign this bill.”

AMY GOODMAN: So, you passed the continuing resolution that actually the Senate had passed when Trump said he was going to sign it. And, of course, you’ve passed this, but it was the Republican House that didn’t sign off on his $5 billion wall. But I wanted to ask you, Congressmember Chu, about the rules package for the new Congress, that, among other things, imposes the rule known as PAYGO, which I know is controversial, which requires Congress offset any new spending with either tax increases or budget cuts. Only three Democrats—your colleague California Congressmember Ro Khanna, Hawaii’s Tulsi Gabbard and New York’s Alexandria Ocasio-Cortez—voted no, saying PAYGO is a conservative austerity measure that could hamper efforts to pass progressive legislation. Congressmember Jim McGovern has said he won’t allow PAYGO to derail progressive causes like Medicare for all. But why, when the Democrats are in power, adopt what they call, really, Republican legislation?

REP. JUDY CHU: Well, I did vote for the PAYGO provision in rules, because it can be easily waived. It will not stop us from contemplating bills such as Medicare for all, because all it takes is a majority of those who are voting to be able to waive this PAYGO requirement. At the same time, I think that the PAYGO statute should be changed and actually eliminated. And let me just say that the two chairs of our Congressional Progressive Caucus also voted for the rules package, which included PAYGO, because of this waiver provision. But those same two members are also going to introduce a bill to eliminate PAYGO as a statute.

And why would they do that? Well, PAYGO was a rule before, in years past. And it makes sense. If you have a new bill, you should find some way to be able to pay for the provisions. But there are times when it is impossible, especially if you want to pass some progressive legislation that can benefit the American people. It wasn’t until 2010 that it became a statute, an actual law. And that’s what I think does need to be changed, because under the 2010 law, the person who is president can actually order the payment for any bill to be implemented by those in his administration. And because we have someone like President Trump in office, he could order his administrators to cut anything that is in existence—I mean, Medicaid, food stamps, any of our progressive programs that pay for our Affordable Care Act. He could actually order a cut to all of those things. And we don’t want to have that situation.

AMY GOODMAN: Congressmember Chu, we’re going to ask you to stay with us, because we want to talk about what you’re proposing for the Tornillo, what you call, prison camp, where 2,300 children, at least, are being held right now. We’re talking to Pasadena, California, Congressmember Judy Chu. She’s the chair of the Congressional Asian Pacific American Caucus. Stay with us. 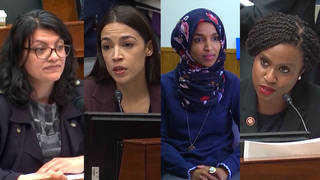 AOC Joins Other Progressives to Vote Against Dems on Funding Bill for DHS, Call for Abolition of ICE