Tens of thousands of people in Lebanon joined hands on Sunday to form a human chain spanning north to south across the entire country. It was a symbolic display of unity across regional and sectarian divisions amid mass protests that have rocked the country in recent days. The protests sweeping Lebanon come amid a wave of similar anti-government protests in Iraq, Egypt and elsewhere in the Middle East. We speak with Rami Khouri, senior public policy fellow and journalist-in-residence at the American University of Beirut and a columnist at The New Arab.

AMY GOODMAN: Finally, I wanted to go to Rami Khouri. You’re at Harvard Kennedy School, but you generally are in Lebanon. Talk about the significance of the protests that are taking place there, and now the reactivated protests in Iraq, where more than 150 Iraqis were killed, but the massive number of people, the human chain across Lebanon that was formed this weekend.

RAMI KHOURI: Yes. I think to see these protests in their proper historical and human context, you have to see them as being the latest phase of populist street demonstrations, activism using the law, activism using elections, petitioning leaders, boycotting groups that are abusing you, doing all kinds of things that Arab men and women and groups, civil society groups, have done for the last about 45 years. You could really trace the beginning of this movement of citizen activism for a more decent life, for social justice, for equity, for opportunity, for accountability, for participation, for voice, for a decent life. That’s all people are asking for. They’re not asking for power or wealth or revenge. They just want to live normal lives, which they haven’t been able to do in recent years, with about 66% of all Arabs, now well documented by many surveys, both Arab and international — about 66%, about two out of every three Arabs is poor and vulnerable. And they’re marginalized politically, and they don’t have any rights, and they often don’t even have any voice. If you speak out now in places like the United Arab Emirates or Egypt or other places, you’re indicted or sent to jail or something.

So, this is a long process that started 30, 40 years ago, never got anywhere, because the autocratic, authoritarian power structure was so strong and could beat back any kind of rebellion. But now people have reached the limit. And you see, in Jordan and Lebanon and Iraq, Sudan, Algeria, other places — you see people just — they can’t put up with it anymore. They can’t feed their children, in many cases. They don’t know what to do when they have four or five children, none of them have jobs, none of them are going to have any decent income.

So, this is a process of public demonstrations representing people who have reached the limit of their endurance, and they’re being treated by their own power structure — forget about Israel, forget about the U.S., forget about Russia, Iran, all these other people who are militarily and politically being involved in the Middle East and abusing people — just the internal disdain with which governments treat their own people, that’s the driving force.

And in Lebanon, people have tried this several times before, but never has it reached the intensity, the depth, the breadth and the sophistication of the demonstrations we see today, where people are basically sitting in the streets, playing chess, playing music, cooking food, demanding that the power structure that has demeaned them and has not served them for the last 30, 40 years, this whole power structure be changed.

And that’s what’s so interesting now. We’re not talking about people asking, like they did 20, 30, 40 years ago in demonstrations, to lower the price of milk or take away this extra tax on gasoline. They’re asking for a complete overhaul of the governance system so that it reflects the fact that sovereignty is vested in the citizen and the citizen is the driver of public policy. What you have in Lebanon and most Arab countries is a political elite. And Lebanon is sectarian-based, so you have an oligarchy of religious and ethnic leaders who have been there for 30, 40 years — fathers pass it on to their sons. And in other countries, it’s not so sectarian-based; it’s based on other mechanisms. But people are simply fed up in all of these countries.

RAMI KHOURI: They don’t have strong ideas about exactly how to set up the government, but they’re articulating principles that are very dear to them and alien to their real life, which is justice, opportunity, equality, decency, dignity and a normal life. That’s all they’re asking for: a normal life.

RAMI KHOURI: So that’s how we should see these demonstrations.

RAMI KHOURI: They’re not going to give up easily. They’re nonviolent, which is very important. The Sudan example is probably the most interesting one to watch now, because they’ve forced the —

AMY GOODMAN: We’re going to have to leave it there, as we have to move on to other protests that are taking place right now in Chile. Rami Khouri, senior public policy fellow and journalist-in-residence at American University in Beirut, nonresident senior fellow at Harvard Kennedy School. Juan Cole, professor of history at University of Michigan. His blog Informed Comment is at JuanCole.com. And Emma Beals, award-winning investigative journalist who is editor of Syria in Context, speaking to us from London.

When we come back, we go to Chile. More than a million people poured into the streets this weekend. 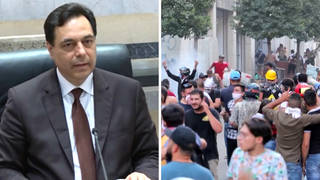