Turkey’s government says its troops are prepared for an imminent assault on Kurdish fighters in northern Syria, after President Trump ordered U.S. troops to fall back from their positions on the Turkish-Syrian border. Kurdish fighters said they’re bracing for a “humanitarian catastrophe.” This follows warnings that former Kurdish allies of the U.S. who feel betrayed by President Trump will abandon thousands of prisoners captured during the U.S.-backed war against ISIS over the past two years. We speak to former housing secretary and 2020 Democratic presidential candidate Julián Castro, who says Trump’s move is a “stunning betrayal of allies.”

StoryOct 19, 2020Jeremy Scahill: “Trump Is Not the Root of the Problem, He Is a Product of American Imperial History”

AMY GOODMAN: Two quick questions, Julián Castro. One, the latest news, Turkey’s government saying its troops are prepared for an imminent assault on Kurdish fighters in northern Syria, this after President Trump’s surprise announcement that he’s ordering U.S. troops to fall back from their positions on the Turkish-Syrian border, the Kurdish fighters saying they’re bracing for a humanitarian catastrophe. Can you respond to President Trump’s latest move? And also talk about his refusal to cooperate with the impeachment inquiry.

JULIÁN CASTRO: Well, this is a stunning betrayal of allies in Syria. These Kurds have fought alongside the United States, pushing back ISIS. They have been vital to our success there. Now, look, I agree with a lot of people that we need to withdraw from Syria, but there’s a difference in doing that in a thoughtful way that’s respectful of our allies and one in a way that betrays them and also sends a signal to allies around the world that the United States is not going to stand up for you. And that’s exactly what this president is doing. He has been condemned on the left and the right for doing this, because of the manner in which he’s doing it. And it has been baffling, the way that this president has handled foreign policy — very haphazard, erratic, undisciplined, self-interested, as well, and more examples of how unfit for office Donald Trump is. I mean, he never should have been in the Oval Office in the first place. And we’ve seen so many examples. The way that he’s betrayed the Kurds is just one more example of that.

With regard to the impeachment inquiry, we have a constitutional crisis on our hands now, because what the administration just said in the letter they sent to Speaker Pelosi yesterday is: “You can’t review us. You have no power over the president or the administration to review our actions.” Where do you go from there, except to say that they’re denying the authority of Congress under the Constitution? He is now obstructing justice again. This itself should qualify as an impeachable offense, and I expect that it will be part of the charge on impeachment. Congress needs to move forward swiftly to hold this administration accountable for President Trump’s violation of his oath of office, his abuse of power. We have never seen anything like this. Even Richard Nixon was not this brazen. And I believe that in short order what you’re going to get is a lot of damning evidence, a lot more — we’ve already seen some — a lot more damning evidence. And the polling that is coming out, showing that support, even among Republicans and independents, for impeachment and removal, that is skyrocketing in support of that, is going to continue —

AMY GOODMAN: We just have 10 seconds, but your response to Bernie Sanders, his heart attack last week? You’re the rival in the Democratic presidential primaries.

JULIÁN CASTRO: Well, I wish Bernie well. I mean, he’s done fantastic work over the years. You know, he looked good when I saw him, at least the shots that I saw. I think he’s going to come back strong. And I look forward to seeing him out there on the campaign trail.

AMY GOODMAN: Julián Castro, I want to thank you for being with us, 2020 Democratic presidential candidate, served as secretary of housing and urban development from 2014 to 2017.

When we come back, we look at Tuesday’s Supreme Court oral arguments deciding whether LGBTQ workers can be legally fired due to their sexual orientation or gender identity. Stay with us. We’ll be back in 30 seconds. 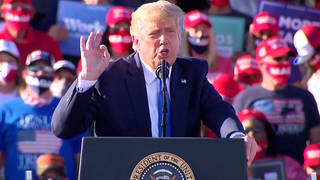 Jeremy Scahill: “Trump Is Not the Root of the Problem, He Is a Product of American Imperial History”