Voters across the U.S. head to the polls today for statewide elections that will be seen as a measure of Donald Trump’s influence in the Republican Party as he faces an impeachment inquiry. In New York City, a major ballot measure could change the way voters select their candidates in future elections. New Yorkers will decide whether to move from electing candidates by a plurality of votes to ranked-choice voting, a system in which voters rank their favorite candidates in order and the person with the most top-ranked votes wins. Proponents of the initiative say it will help underrepresented voters and candidates of color. Maya Wiley, senior vice president for social justice and professor of public and urban policy at The New School, joins us for a discussion of the ranked-choice voting system, which she says is about “voters having more choice on who gets elected into public office.”

JUAN GONZÁLEZ: Voters are heading to the polls today in many parts of the country for state and local elections that will be seen as a measure of President Trump’s influence heading into the 2020 presidential elections. Several local races and ballot initiatives have received national attention. Voters in Tucson, Arizona, will decide whether to become Arizona’s first “sanctuary city.” And here in New York, voters will decide on a major ballot measure that could change the way candidates are selected in future elections. New Yorkers will decide whether to move from electing candidates by a plurality of votes to ranked-choice voting, a system in which voters rank their favorite candidates in order and the person with the most top-ranked votes wins.

AMY GOODMAN: If the measure passes, New York will be the most populous U.S. jurisdiction with ranked-choice voting.

So, we want to find out how it will do that, but first, because this is so little talked about in this country, on this Election Day, Maya, explain what ranked-choice voting is, where it’s used in the United States, and then why you think it’s most important.

MAYA WILEY: Yeah. Well, thank you. It’s great to be here on such an important day. I hope everyone is voting.

Ranked-choice voting is really quite simple. It’s really about voters having more choice about who gets elected to public office, because, essentially, in these races where we have multiple candidates — and we’re seeing this increasingly, particularly in New York City — you can say, “Here’s my first choice. Here’s the person I like second. Here’s the person I like third,” and you can rank up to five people. You can just choose one, if you only want one. But what this does is it means that if there’s a runoff, if we have a candidate that doesn’t win 50 plus one — 50% plus one vote, there’s a majority candidate. There’s a majority candidate, that person wins. But if no one wins a majority, this allows the system, rather than asking people to come back to the polls for a runoff, it throws out the candidate that got the least number of votes, and it takes those voters’ second choices and then it retabulates. And it just keeps going until there’s a candidate that has 50% plus one vote.

JUAN GONZÁLEZ: And this will effectively eliminate what in New York City has become a regular headache, which is runoffs, right?

JUAN GONZÁLEZ: Runoff elections, that are not only costly, but then require voters to come out more often.

MAYA WILEY: Exactly. And this is why I as a resident, I as a black woman, I as a racial justice advocate, strongly support ranked-choice voting, because we know, for low-income people of any race, and particularly low-income people of color, we don’t have enough people actually coming out to vote for a lot of reasons. One of them is that people are earning paychecks. People have children, and they don’t have child care. So they’re making decisions about whether they come to the voting booth or do other things that actually sustains their family. And what this does is it doesn’t — we see a huge drop-off of voters of color coming back for runoff elections, for good reason, in many instances. And what this does, it says to the single mom who has to earn two paychecks just to make ends meet, maybe not even making ends meet, doesn’t have to come back to the polls for her vote to count.

AMY GOODMAN: You know, you wrote this piece in Juan’s alma mater — is that what you call it? — where you used to work, Juan, the other DN, New York Daily News, in support of ranked-choice voting. There was a counterpoint to your piece, and it was written by New York City Councilmember I. Daneek Miller, who wrote that communities of color are the exception to the city’s poor election turnout and that the implementation of ranked-choice voting could diminish the value that they bring to the ballot box. He goes on to say, “Ranked-choice voting could afford a 'traditional' candidate an unfair advantage in an election that has women or candidates of color running. Local political science experts have already suggested that voters in an RCV system might hedge to a traditional candidate as a 'safe' second choice.” Your response?

MAYA WILEY: Well, look, first of all, I want to say I think it’s incredibly important that people care about whether or not the vote of our people of color in New York City are being counted. So that’s important, and I agree with taking a serious look at it.

What I did was pull the studies. I looked at the research. We have San Francisco. We have Oakland. We have Minneapolis. We have many places where ranked-choice voting has happened. And what we have seen in the research is that it increases the number of people of color by 62% in four California cities that were studied, 62% increase in people of color being elected to local office. You know, in Minneapolis, a trans black man was elected as a result of ranked-choice voting.

So, I think the fear is — for change is understandable, in the sense that change is scary. I don’t think — and we had a press conference yesterday on the steps of City Hall, where we had black, Latino and Asian elected officials standing up for ranked-choice voting, who were nontraditional candidates, who were people who are progressive, who were people who are not part of machine politics, who were people who had received racist attack ads trying to divide and undermine their campaigns, saying, “Ranked-choice voting is going to create more opportunities for more candidates that look like us, but also we think our constituents know how to do this.”

JUAN GONZÁLEZ: And speaking of political machines, since this election is an election where there won’t be a lot of people necessarily voting anyway, how are the political machines of the city responding to this particular amendment? And also, if it’s approved, when would it take effect?

MAYA WILEY: So, I can’t really speak to the machinery. I can tell you that we have lots of elected officials who are supporting ranked-choice voting. And I think that’s what’s important, as there’s a disagreement among electeds, particularly electeds of color. They’re not speaking with one voice. But I’m very, very excited that we have so many standing up in favor of ranked-choice voting.

I think, in terms of implementation, it’s 2021. You know, we have every City Council seat is going to be up for reelection. We’ll have a mayoral race. We are looking at hundreds of candidates for local offices. Ranked-choice voting is going to save us a lot of time. It’s going to save a lot of folks money. It’s also going to ensure that more votes are counted.

JUAN GONZÁLEZ: I want to take the chance, since you’re an expert on this issue, to ask you about another question, which is the recent federal appeals court decision on net neutrality. You were the chief telecom person in the de Blasio administration, so this is a subject dear to your heart. The decision by the court to strike down — or, to support the FCC’s striking down of net neutrality but to allow states to fashion their own policies?

MAYA WILEY: Well, as you know, I’m a big supporter of net neutrality, having been here talking about it in the past. You know, I think what’s concerning is the amount of money in politics and the fact that telecoms go and actually go to states and try to get them to pass laws at the state level that prevents local government from doing more to ensure that there’s an open Internet. And that’s a big concern that I have, is that when you push it down to the states, you will have some states that will do the right thing, and you will have some states that will do the wrong thing, and then we don’t have a good system of protections for a system, for an internet, that is global.

AMY GOODMAN: Well, we want to thank you, Maya Wiley, senior vice president for social justice, professor of public and urban policy at The New School.

Colorado Has One of the Highest Voter Turnouts in the Country. Here’s How They Did It

NEXTColorado Has One of the Highest Voter Turnouts in the Country. Here’s How They Did It 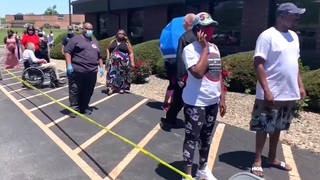