A documentary film “The Pollinators” tells the story of the world’s yellow-black jacketed honey bees, whose existence may determine the future of human survival. The insects pollinate nearly all the fruits, vegetables and nuts we consume, and some experts estimate one out of every three bites of food we eat depends on the work of honey bees. However, the future of the insects is now in peril with widespread reports of bee colony collapses. In the last decade and a half, beekeepers have reported staggering declines in their bee populations due to pesticides, parasites and loss of habitat. Scientists warn climate change is also threatening the insects’ survival, noting bees could die off at faster rates as the Earth warms. For more about the crisis of bee population decline, we’re joined by Peter Nelson, director of “The Pollinators,” cinematographer and beekeeper.

NERMEEN SHAIKH: We end today’s show with a stinging new documentary that’s already generating a lot of buzz. The film is called The Pollinators and features swarms of yellow-black jacketed honey bees, whose existence may determine the future of human survival. The insects pollinate nearly all the fruit, vegetables and nuts we consume. Some experts estimate one out of every three bites of food we eat depends on the work of honey bees.

But the future of the insects is now in peril, with widespread reports of bee colony collapses. In the last decade and a half, the nation’s beekeepers have reported staggering declines in their bee populations due to pesticides, parasites and loss of habitat. Scientists warn climate change is also threatening the insect’s survival, noting that bees could die off at faster rates as the Earth warms. This is the trailer for the new documentary The Pollinators.

SUSAN KEGLEY: Bees are so fascinating. When you first go into a beehive, you’re like worried about getting stung. And then, as soon as you start watching them and seeing them on the combs communicating with each other, it’s just so fascinating, so complex. And it mostly works, until we get in the way of it.

SAMUEL RAMSEY: Populations of honey bees are dying at levels that are unprecedented and very concerning. Close to half of the colonies in the U.S. are dying every single year.

DAVE HACKENBERG: Native pollinators have disappeared, and farming has become a lot bigger. And so, due to all this, you know, now we need beekeepers that can move bees from one place to the other.

DAVEY HACKENBERG: It’s going to take 20, 30 years for that ground to get back in the shape it was to sustain life for all these wild insects, birds and fowl and everything else.

LUCAS CRISWELL: Protecting the land around us, protecting the soil under us is really our obligation. And from that, we get delicious, nourishing products.

DAVEY HACKENBERG: We’ve been pollinating fruits and vegetables and nuts for — since the '70s, ’60s, ’50s, and we haven't had these kind of losses. We’re not bad beekeepers; we’re just trying to hang onto our business.

AMY GOODMAN: Well, for more, we’re joined now by Peter Nelson, director of The Pollinators, also a beekeeper himself.

Welcome to Democracy Now! It’s great to have you with us. A mass extinction of bees? Explain.

PETER NELSON: Yeah, it’s just the losses that beekeepers have been facing has been, in the last — since 2005, 2006, has really been somewhere between 30 and up to 50%, depending on where they are in the country. And it’s a little alarming.

NERMEEN SHAIKH: And is that true just in the United States, or are bees all over the world experiencing this? Or is it because here in the U.S. they use more pesticides?

PETER NELSON: The bees — there’s a worldwide loss of insects, and I think that’s been documented. But here in the United States, because of their exposure to pesticides in agriculture, it’s particularly pronounced.

AMY GOODMAN: Let’s turn to an excerpt from the film The Pollinators, beginning with Susan Kegley of the Pesticide Research Institute.

SUSAN KEGLEY: Many crops require pollination by insects. And because the native pollinators who used to be here are no longer in large enough quantities to do that pollination, the managed honey bees have stepped in to take the role of pollinator.

UNIDENTIFIED: Well, pollination is a basic natural function. A lot of plants in nature need insects to transfer pollen, and one of the most efficient is the honey bee.

DAVE HACKENBERG: So, basically, you know, all the good stuff we eat, the vegetables and the fruits and so on, most of that needs honey bee pollination or pollination by native pollinators.

DAVEY HACKENBERG: The chemical companies, they figure we should eat corn, soybeans and rice, and that don’t need to be pollinated. And that’s what they think we ought to live on. But if you like your fruits and vegetables and your nuts, a lot of that stuff need pollinated. A lot of wild insects can do the job, but not as well as bringing in a commercial beekeeper to put down a thousand colonies in one area and give a good blast to the pollination.

DAVE HACKENBERG: Our business has got two different ends to it. One of them is producing honey. But, of course, the reason honey bees are here in the first place is to pollinate our crops, you know, because one out of every three bits of food we put in our mouths comes from honey bee pollination.

SUSAN KEGLEY: I think the general public should know that our food system is threatened by the fact that the bees are in trouble. And they should care about that because they eat food.

AMY GOODMAN: And this is another clip from The Pollinators featuring beekeeper Dave Hackenberg, who was among the first beekeepers to sound the alarm about bee colony collapse disorder in 2006.

DAVE HACKENBERG: So, the problem is that native pollinators have disappeared, and farming has become a lot bigger. And so, due to all this, you know, now we need beekeepers that can move bees from one place to the other. And, of course, the only bees that are really movable, that you could put on the back of a truck and truck them all over the place, is honey bees.

AMY GOODMAN: An excerpt of The Pollinators. Peter Nelson, how does Europe deal with bees differently than the United States?

PETER NELSON: Well, the European Union has placed a ban on neonicotinoid pesticides, which is huge. In fact, they just recently strengthened it, because they didn’t have — the science was showing that it wasn’t working. And here, we have a different setup. The precautionary principle that the European Union uses says that we really need to test these pesticides or fungicides or herbicides, whatever, before they go into the environment, to make sure they’re entirely safe. And here, we have kind of a different approach, where we have — oftentimes the chemical companies are doing the testing themselves and doing their — getting their own results, and they get a conditional registration, which allows them to use the pesticides without being fully tested in the field, which — and that’s a law that’s been bound by the EPA.

NERMEEN SHAIKH: And in the film, Peter, many people, including Bill McKibben, talk about the fact that bees — that the collapse of the bee population is just one instance of what is to come. Why is what’s going on now with bees a harbinger of what might come later?

PETER NELSON: Well, honey bees are studied more than a lot of other insects and bees, and so we have data on them. And since they’re so well studied and documented, if the losses are like that on honey bees, it brings up the question: What’s else is going on in nature with other species, with other insects? And it’s important to know that honey bees are only one of 4,000 species of bees in North America.

AMY GOODMAN: I want to go to Bill McKibben, co-founder of 350.org, who you interview in The Pollinators.

BILL McKIBBEN: We can learn a good deal from bees about the health of the landscapes that we inhabit, and, sort of secondarily, we can learn a good deal about the folly of setting up our agriculture in quite the way that we have. It looked so efficient and — concentrate everything in the ways that we’ve done it. But that turns out to be a false efficiency. It is the cheapest way to produce pork or corn or whatever else, but that cheapness comes at a high price. And that price is the loss of the agricultural diversity, redundancy, resiliency, that is really beyond price. You know, it’s the thing that we’ve built up over 10,000 years of agriculture. And now, in a kind of hundred years of industrialization, we’ve managed to get rid of most of it.

AMY GOODMAN: That’s Bill McKibben in The Pollinators. Peter Nelson, you, too, are a beekeeper. Talk about — you’re talking about pesticides and how they’re used in this country, also the whole issue of the climate crisis.

PETER NELSON: Yeah, totally. Bees are an indicator species, so we really need to pay attention to what’s going on, because our agricultural system is really dependent upon these commercial bees. You know, agriculture has gotten much more simplified, more monocultures, more chemically dependent. And so it’s required to bring these bees in, because so many of the native bees that would traditionally have done pollination are not able to live there anymore. So, it’s become essential to bring these bees in, almost as an insurance policy for much of agriculture.

AMY GOODMAN: And the agriculture that uses bees?

AMY GOODMAN: I want to thank you so much for being with us, Peter Nelson, director of the new documentary The Pollinators.

And that does it for today’s show. On Friday, Democracy Now! will be broadcasting and live-streaming the first-ever Presidential Forum on Environmental Justice at South Carolina State University in Orangeburg. Candidates taking part so far include Senators Elizabeth Warren and Cory Booker, businessman Tom Steyer, as well as Marianne Williamson and others. I’ll be moderating with former EPA official Mustafa Ali. You can watch it as we live-stream at democracynow.org beginning Friday evening at 6 p.m. Eastern. Also, television stations and radio stations will be running it across the country. We’ll also be broadcasting from Orangeburg, from South Carolina State, tomorrow morning, Democracy Now! 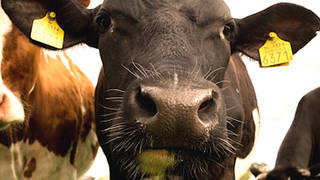