We get response from London-based Asad Rehman, executive director of War on Want, on two major news developments: The United Kingdom — which will head the COP next year — is set to vote Thursday in what some are calling “the climate election,” and the Washington Post has published a confidential trove of documents that reveal how senior U.S. officials have lied throughout the 18-year war in Afghanistan, the longest war in U.S. history, while hiding evidence the war had become unwinnable.

AMY GOODMAN: This is Democracy Now!, democracynow.org, The War and Peace Report. We’re broadcasting from the U.N. climate summit in Madrid, Spain. I’m Amy Goodman. As we speak outside the plenary halls of this summit here in Madrid, in the background we can see the enormous hands of a sculpture pressed against the edifice of a street scene in Venice, Italy. The piece was created by the Italian sculptor Lorenzo Quinn, son of the Oscar-winning actor Anthony Quinn. An inscription at its base reads, in part, “Venice, the floating city of art and culture that has inspired humanity for centuries, is threatened by climate change and time decay and is in need of the support of our generation and future ones,” unquote. The hands are those of a child, representing Venice’s present and future, supporting life and culture. In November, nearly 90% of Venice was flooded amidst high tides and heavy rains, causing over a billion dollars’ worth of damage to historic buildings. Venice’s mayor called the flooding “apocalyptic” and said climate change is to blame.

Still with us, Asad Rehman, executive director of War on Want, worked on climate change issues for over a decade. Asad, we just finished up with Harjeet and you talking about what’s happening here, but I’m wondering if you can talk about what’s happening right now in Britain. I hope to come back to you at the end of the week, when you’ll be in London, because your elections are Thursday. But the significance of what’s happening there? What is at stake?

ASAD REHMAN: So, there’s much at stake. I mean, of course, it’s a huge election. From a climate-related point of view, it’s going to be a big debate about whether the U.K. adopts what is called now a Green New Deal, with really ambitious targets of trying to reduce our emissions by 2030 or close to by 2030, with a massive investment in terms of new green jobs and tackling austerity and delivering both climate justice for people domestically and also recognizing the U.K.’s footprint globally.

AMY GOODMAN: Earlier this year, the British House of Commons became the first parliament in the world to declare a climate emergency. This is Labour Party Leader Jeremy Corbyn.

JEREMY CORBYN: We have no time to waste. We are living in a climate crisis that will spiral dangerously out of control, unless we take rapid and dramatic action now. This is no longer about a distant future. We’re talking about nothing less than the irreversible destruction of the environment within our lifetimes of members of this house.

AMY GOODMAN: The resolution came on the heels of April’s Extinction Rebellion uprising in London that saw police arrest more than a thousand protesters, many of whom superglued themselves to buildings, trains and sidewalks in a nonviolent direct action campaign. So, the position of the prime minister now, Boris Johnson? The two top candidates essentially are Labour Leader Jeremy Corbyn and Boris Johnson.

ASAD REHMAN: Yes, it’s often now called that we’re in a “climate election.” And to put it starkly, we have environmental organizations who have rated everybody’s manifesto. At this moment they are saying that the Labour Party has the strongest manifesto on tackling the climate crisis. The offer that’s been put on the table by the Conservative Party is deemed to be the weakest. It has a much longer target date of net zero by 2050, no real pathways to how we would even achieve that.

And to put it into context, the U.K. is important because next year the U.K. will be the president of the COP, as COP26 moves to the U.K. So, if the U.K. is showing real climate leadership, it could help unblock the real need for ambition both in terms of emission reduction by rich developed countries, but also of countries accepting that they have an obligation to pay their climate finance. And for many of us who have been inside this space, we know that the reality of mobilizations around the world now with millions of people out on the street needs to change our governments at home, so that they come here with a mandate to actually adopt action. Otherwise, it feels like Groundhog Day here, where governments continue to talk, but actually offer very, very little action.

AMY GOODMAN: And finally, I wanted to just get a quick comment from you — we’re going to do this much more extensively in the days to come — but on what many are calling the new Pentagon Papers, The Washington Post revealing a confidential trove of documents that reveal how senior U.S. officials have lied throughout the 18-year war in Afghanistan, the longest war in U.S. history. The first installation of the explosive report, published Monday, headlined “At war with [the] truth,” documenting how U.S. officials repeatedly lied about the war’s progress, while hiding evidence the war had become unwinnable, it shows how three successive presidencies — George W. Bush, President Obama, President Trump — have bungled the war in Afghanistan despite three-quarters of a million U.S. troops there since 2001, the papers also revealing how U.S. officials tried to hide the truth about the war from the American public. You have long worked on not only climate issues — and they are connected — but the issue of war. Can you talk about what you have read so far?

ASAD REHMAN: Yes. I mean, and it’s a damning indictment. And, of course, it validates what many of us have long said, during both the war in Afghanistan, and it’s as equally applicable to the military interventions that have taken place in Iraq and Libya. We’ve always said that, actually, the trillion dollars that, for example, has been spent on this misguided war would not deliver any progress for the people of Afghanistan. And the fact that the military and the government lied to their own people and said, actually, progress was made, was being made, I mean, is absolutely shocking.

The reality on the ground, as we know, is Afghanistan is still a more dangerous place. This is not genuine peace building. Peace building does not come at the barrel of a gun, and democracy does not come at the barrel of the gun. If the governments were serious about wanting to tackle the military conflicts, their first step would be to stop selling the arms and weapons that fuel these conflicts. The second would be stop supporting military dictatorships and these regimes which commit human rights violations. And thirdly would have been to actually support the Afghan people and their genuine peace-building movements that were existing there. It did none of those things. And it’s leaving Afghanistan in a much more horrific and a much more broken place than it was, than when it started.

AMY GOODMAN: Well, we will certainly continue to cover this explosive series, and we’ll link to it at democracynow.org. Asad Rehman, executive director of War on Want, thank you so much for joining us.

When we come back, we look at indigenous resistance here at the U.N. Climate Conference, from pipeline politics to the Amazon. Stay with us. 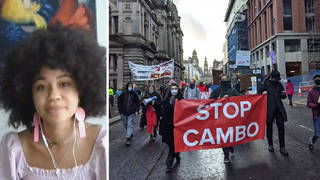