DAVID CUAUTLE: We need these licenses because there’s cold weather, snow. And then, when the snow gets higher, we’re not going to be able to walk. You can call this community a 'great community' when we need licenses? Licenses can help our children go to a better — go to school and learn. Because my parents don’t have a license, that’s why I barely go to school. And I came here today because I support the licenses.

We’re joined by three people in the studio. Yaritza Mendez is associate director of organizing at Make the Road in New York. She helped push through the New York law. Haydi Torres is an organizer with Movimiento Cosecha, which led the organizing to push New Jersey lawmakers to pass the bill for driver’s licenses for the undocumented. And David Cuautle, the 9-year-old immigration rights activist who spoke and testified.

We welcome you all to Democracy Now! Yaritza, let’s begin with you. In New York, people lined up at the DMV, Department of Motor Vehicles. Explain how this happened.

AMY GOODMAN: Haydi, talk about what happened in New Jersey.

HAYDI TORRES: It’s very similar to what happened in New York. And we are so happy for this victory on Monday. It also took 18 years for us to win this campaign, this battle. And we are overwhelmed by all the messages of support and solidarity that have come across different states. And there’s already like people asking us, “Can you come down? Can you support campaigns in other states?” So, very, very, very, very happy, because, you know, half a million of New Jersey undocumented immigrants who go to work every day are going to benefit from this.

AMY GOODMAN: We just watched you in the state Legislature in New Jersey. What grade are you in?

AMY GOODMAN: Where did you learn to speak like that? I mean, whether someone is documented or not documented, it takes a lot of guts to speak to these state leaders. Tell us what you said.

DAVID CUAUTLE: I said — I told him, the legislators, why the licenses are important. And I told them that I’m not obligated to go there. I want to go there because I want to support them to win these licenses. Licenses are important because they could help you in many ways. They could help your kids and child. You could take them to school. And you’re going to be able to drive without any fear of getting stopped by the cops and having to pay a ticket of at least $500 or more. And then they’re also important because family — family people don’t know how to speak English, and some kids want to learn. And some kids can’t go, because they don’t have a license. And the weather could also be terrible. And if childs just walk on their way to school, they might get like freezing cold or the snow, the rain, and that could make them sick.

AMY GOODMAN: David, tell me what you’re wearing right now. What does your sweatshirt say, and what do you have on your arm?

DAVID CUAUTLE: This says, “Licenses yes, promises no, Cosecha.” And then this says, ”Poder Popular.” That means the power of the people and the community.

DAVID CUAUTLE: I felt really happy and full with joy, because I realized that I made a whole difference on this group, because I actually, after 18 years, for them to say yes and sign the bill.

AMY GOODMAN: Haydi, described the process in New Jersey, what exactly it took. And how much bipartisan support did you get?

HAYDI TORRES: Yes, it was — to be honest, we are still shaking over the feeling, you know, on Monday. And even though despite Jersey being a Democratic majority, you know, it took them — a lot for them to realize that this is a need for the immigrant community. And we passed the Senate by 21 votes. And we did have Democrats in the south that, you know, were not in support of the immigrant community, did not stand with our community, with our parents. And I think that what really moved this campaign and what we focused on was people power. We centered this campaign in the undocumented community.

HAYDI TORRES: It took — we’ve been working in this campaign for the past two years, but this bill has been introduced for the past 18 years, several and several other years. So it took a collective power of people and other organizations, you know, to pass this, to move it, and despite them not being standing in support, because that’s why we say, “Licenses yes, promises no,” because we understood that, you know, for the past few years they keep making promises to the immigrant community and just using us and our bodies to take space and being tokenized.

AMY GOODMAN: You talk about your bodies.

AMY GOODMAN: There was also a hunger strike in the midst of this.

HAYDI TORRES: Yes, we did. We did escalation last year at around this time. We also did a hunger strike that lasted for more than eight days. And that’s when the bill was drafted, and then we were waiting for the bill to be put in committee, but it did not happen, so we kept escalating. And we always did actions that is centered in the immigrant community, right? We did civil disobediences and other actions where people were able to join.

AMY GOODMAN: And, Yaritza, talk about how this impacts the lives of immigrants in terms of being pulled over, if they don’t have a driver’s license, and now having one.

YARITZA MENDEZ: It’s, I mean, like he mentioned before, right? It’s just that fear of even driving their kids to school or going to a religious institution and being fearful of maybe not coming back home or being separated from their loved ones, if you get pulled over. Now with a driver’s license, people are being able to drive around freely without that fear of being separated.

AMY GOODMAN: And talk about what this means nationally, this national movement for this. And how do you respond to people who say, “I’m afraid, actually, to get a driver’s license, because then the police and the government, the federal government” — we know Trump is so fiercely anti-immigrant — “will get my address”?

YARITZA MENDEZ: Yeah. So, with the legislation itself, the Green Light Law here in New York is one of the strongest, because we learned from some of the gaps or the loopholes that other states that had passed similar legislations many years ago. So we made sure to strengthen the privacy protections within it and ensuring that ICE didn’t share confidential information about its applicants without — with ICE agents, unless they do have a judicial warrant. And we continue to kind of like have these open-minded conversations with people, and, of course, talking about the risk, right? Like, if you are someone who had a prior order of removal, it is advisable that you see an attorney before you go and apply for a driver’s license, so taking those precautions. But it doesn’t mean that people should be afraid of going ahead and apply, which is why, as community-based organizations, we’re trying to put as much information as possible.

AMY GOODMAN: We’re going to have to end this up, but, David, in nine years, can get a driver’s license. Where would you like to drive to?

AMY GOODMAN: Well, I want to thank you so much for being with us, David Cuautle, 9 years old; Yaritza Mendez, Make the Road New York; and Haydi Torres of Movimiento Cosecha. 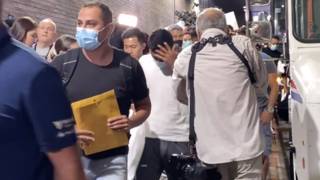