The trial to impeach President Trump could soon head to the Republican-controlled Senate, which requires a two-thirds supermajority vote to convict. Senate Majority Leader Republican Mitch McConnell has said he is not an “impartial juror” and that he would closely coordinate a Senate impeachment trial with the White House Counsel’s Office, leading Democrats to accuse McConnell of trying to preside over a sham trial. We speak with John Bonifaz, who spearheaded the push for impeachment with his group, Free Speech for People. Bonifaz says that despite the low chance of conviction in the Senate, Wednesday’s impeachment vote was important in holding “this lawless president” accountable. “I do agree that we need to demand a full and fair trial out of the United States Senate and that we cannot allow the kangaroo court that Mitch McConnell appears to be preparing for,” he says.

NERMEEN SHAIKH: In a historic vote Wednesday, the House of Representatives impeached President Trump, marking only the third time in U.S. history that a president has been impeached. By a vote of 230 to 197, the House passed the first article of impeachment, that accuses Trump of abuse of power. It also approved the second article, that charges him with obstructing Congress by refusing to cooperate with the impeachment investigation.

AMY GOODMAN: For more, we’re joined by John Bonifaz, who spearheaded the fight for impeachment, is co-founder and president of Free Speech for People, attorney and political activist specializing in constitutional law and voting rights, a co-author of The Constitution Demands It: The Case for Impeachment of Donald Trump. He’s joining us from his home in Amherst, Massachusetts.

John, welcome back to Democracy Now! So often when history is told, it is written by those in power. Of course, it’s the House that has just impeached President Trump. But you’ve been part of a movement for years that has been demanding this. Can you respond to what’s happened, and what you want to see next?

JOHN BONIFAZ: Well, thank you, Amy, for having me.

We launched our campaign, co-launched it, on the day of the inauguration of Donald Trump, in January 2017, because of this president’s refusal to divest from his business interests all over the world and engaging in treating the Oval Office as a profit-making enterprise at the public expense. He has gone on to commit many other impeachable offenses. And this pattern of abuse of power is why this president must be held accountable. So, while we support the articles of impeachment that the Congress has just — the House of Representatives has just passed, we also believe it’s important to hold this president accountable for all of his high crimes, not just those associated with the Ukraine scandal.

NERMEEN SHAIKH: Well, John Bonifaz, there seems to be almost near-universal consensus that the Senate will not in fact vote to impeach him. So could you talk about what the effect on him and his reputation might be with this long-drawn-out impeachment inquiry?

JOHN BONIFAZ: I think, first of all, it’s important to set the precedent that no president is above the law and that this president, this lawless president, who has so defied our Constitution and engaged in this pattern of abuse of power, must be held accountable. And that accountability begins with the House of Representatives issuing these articles of impeachment.

I do agree that we need to demand a full and fair trial out of the United States Senate and that we cannot allow the kangaroo court that Mitch McConnell appears to be preparing for. And that demand needs to be made again by we, the people. This cannot be a bystander process where we watch it on television or listen to it on the radio. We need to participate and be in the streets and demand that our senators do the right thing and be on the right side of history.

But even if the Senate does not vote to convict and remove, the precedent that has been set is critically important, that these charges have been issued against this president and that he will be held accountable in history. And, you know, we are facing a dangerous moment right now where we have a lawless president who is so willing to rig the next election, to trample on our Constitution, that we all have to be vigilant. And that starts with demanding that there be a full and fair trial and conviction and removal of this president.

AMY GOODMAN: So, what do you think — you’re a constitutional lawyer — very quickly, what Nancy Pelosi is doing right now, refusing to transfer the articles of impeachment, right? He’s been impeached; the Senate would decide whether he would be removed. But not even to let them have it? How does she get a guarantee of what they’re going to do? And then I want to ask you about Al Green, him saying that we can impeach him again and again, who clearly was for, as your organization has been for and the movement has been for, articles of impeachment that included many other issues.

JOHN BONIFAZ: Yes. Well, Speaker Pelosi is right to demand a full and fair trial out of the Senate, as we all are who care about this Constitution. And to hold back the articles until that is guaranteed, I think, is a wise move, but not to hold them back forever. These articles must be ultimately submitted to the Senate, and every senator must be put on record of where they stand with respect to this president’s abuse of power. So that has to happen.

As far as Congressman Green, you know, he’s an American hero. He stood up first in the United States House of Representatives to demand that this president be held accountable through the impeachment process. And we fully agree with him that there is nothing in the Constitution that says that the U.S. House of Representatives can only impeach once during a presidential term. This president has committed multiple impeachable offenses, including his racist abuses of power, including his cruel and unconstitutional imprisonment of children and their families at the southern border, including his obstruction of justice. The list goes on. And this president ought to be held accountable for the full range of his abuses of power. So, if Congressman Green decides that he’s going to push for new articles of impeachment on the floor of the U.S. House of Representatives, we’ll be right there by him to defend and support that.

AMY GOODMAN: John Bonifaz, we want to thank you for being with us, co-founder and president of Free Speech for People, co-author of The Constitution Demands It: The Case for the Impeachment of Donald Trump.

When we come back, the Justice Department inspector general says the FBI used false information to obtain approval to wiretap a Trump campaign adviser. Stay with us. We’re going to speak to the ACLU. 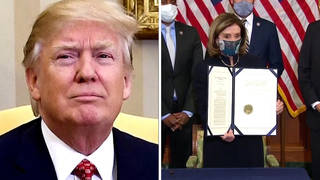