U.N. Report Finds Over 7 Million Children Worldwide Are Being Held in Various Kinds of Detention

A damning United Nations report says that 7 million children are deprived of their liberty worldwide, from children imprisoned on the U.S.-Mexico border to the missing children of ISIS fighters. The Global Study on Children Deprived of Liberty says that at least 410,000 of those children are detained in jails and prisons, where violence is “endemic.” The study also found that the number of children detained in the context of armed conflict has dramatically risen. The global study was published in November, on the 30th anniversary of the Convention on the Rights of the Child, the landmark international treaty affirming the world’s commitment to protecting children. It is the most ratified U.N. treaty in history — the United States is one of the only countries that hasn’t ratified the convention. We’re joined by Manfred Nowak, lead author of the U.N. Global Study on Children Deprived of Liberty. Nowak is also a human rights lawyer and U.N. independent expert. He served as the U.N. special rapporteur on torture from 2004 to 2010.

AMY GOODMAN: This is Democracy Now!, democracynow.org, The War and Peace Report. I’m Amy Goodman. We’re broadcasting from Stockholm, Sweden, as we end today’s show with a damning U.N. report that says 7 million children worldwide are deprived of their liberty, from children detained on the U.S.-Mexico border to the missing children of ISIS fighters.

The Global Study on Children Deprived of Liberty reports that millions of children are living in various states of detention across the globe, from orphanages and foster homes to police custody and immigration detention. Among them, at least 410,000 are detained in jails and prisons, where violence is, quote, “endemic.” The study also found the number of children detained in the context of armed conflict dramatically has risen.

The global study was published in November on the 30th anniversary of the Convention on the Rights of the Child, the landmark international treaty affirming the world’s commitment to protecting children. It is the most ratified U.N. treaty in history — the United States is the only country that has not ratified the convention.

We’re joined now by the lead author of the U.N. report on children, Manfred Nowak. He is an Austrian human rights lawyer, serves as the secretary general of the Global Campus of Human Rights based in Venice, Italy, and he’s also the former U.N. special rapporteur on torture.

We welcome you to Democracy Now! It’s great to have you with us, Manfred. If you can summarize the results of this devastating report?

MANFRED NOWAK: As you said already, it’s more than 7 million children that are deprived of liberty, most of them in all kind of institutions, but also in the administration of justice, in migration detention. And every of this child is too much, because the Convention on the Rights of the Child is very clear. It says deprivation of liberty of children shall only be allowed as a measure of last resort. So it means that we have to do much more — states, primarily, have to do much more — in order to reduce those children, by means of diversion, by stopping immigration detention, because it is never a measure of last resort, it always violates the convention, but also to establish special children courts to apply diversion measures, because we need much more resources to support families, foster families, but also child welfare systems. They should take these children even if they are in conflict with the law.

AMY GOODMAN: So, you talked about detention and how that violates the international treaties on the Convention of the Child. The U.S. — let’s start there — is the only country in the world that has not ratified this convention?

MANFRED NOWAK: The convention is now 30 years old. It entails all kind of rights, in particular. Also every decision that affects children should take into account the best interest of the child. Children should participate in every decision that is directly affecting them. There should be no discrimination against children. There should not be violence, whether sexual violence, etc., but also, in principle, no deprivation of liberty. On the other hand, children should be supported in the right to education, healthcare, etc. It’s a very comprehensive treaty that really takes into account the most basic needs of children.

AMY GOODMAN: That the U.S. alone is not honoring.

AMY GOODMAN: So, you talked about detention on the border, the number of children that are detained, that are separated by their families in this country, and you’re talking about an international violation of law.

MANFRED NOWAK: Yes. Of course, this was, in my opinion, a decision that is inhuman treatment, both to the children, and very small children that were separated from their families, but also to the families. You know, sometimes the families have been deported back to Mexico or Central America, and the children are still kept in the United States. The children don’t know where their families are. The families are searching for their children. This is terrible, if you imagine, if you are a mother of a small child and you don’t know where the child is.

AMY GOODMAN: Also, the children of ISIS fighters, explain where they’re being imprisoned.

MANFRED NOWAK: We have about 29,000 of these children. Partly, they were recruited via the internet by ISIS. Partly, whole families went to the so-called caliphate. And it’s small children, or they were even born there, and now they are detained either by the Kurdish authorities in the north of Syria or in Iraq, under deplorable conditions. And very often, European or other countries where they are coming from don’t want to take them back. So, what we are saying and recommending is that European and Central Asian and other states should take the responsibility for their own nationals, to actually take them back and try to resocialize them, not to punish them. Children in armed conflict, child soldiers, should be seen primarily as victims, but not as perpetrators.

MANFRED NOWAK: I mean, what we know is that about 1 million human beings, Uyghurs, Muslims from Xinjiang in China, are currently detained in camps for re-education purposes. And, of course, many of them are children, and those are children who have been separated from their parents. But we don’t have enough information to really say how many, but certainly those are thousands, many thousands of children that are suffering there.

AMY GOODMAN: So, what does it mean when a state doesn’t participate in giving over information?

MANFRED NOWAK: Of course, we sent out a questionnaire to all member states of the United Nations, and we had a fairly good response. But, of course, certain states, including China and the United States of America, did not reply to our questionnaire, so we had to rely on other official data. And that’s why also our estimates are very conservative. If I’m speaking about 410,000 children in jails and prisons, it’s a very conservative estimate. Probably the real number is much higher.

AMY GOODMAN: I wanted to ask you about a story that goes back in time but actually is in the headlines right now. And it’s about this latest news that we had in our headlines about the International Criminal Court finding the U.S. — looking into crimes against humanity or war crimes. And, I mean, when you were the U.N. rapporteur on torture, you called for an investigation into President Bush and Donald Rumsfeld for war crimes. This relates directly.

MANFRED NOWAK: Yes, for war crimes and crimes against humanity — for me, I was special rapporteur on torture — for torture that was practiced both in secret detention camps, in Guantánamo Bay, in Abu Ghraib and in other facilities, in particular those in Afghanistan, the prison of darkness, etc., which were terrible crimes that were committed there under the direct responsibility of President Bush and, of course, Secretary Rumsfeld, as well. So I am very happy, actually. It’s a little bit late that the International Criminal Court only now is starting to investigate these crimes that happened in Afghanistan many, many years ago.

AMY GOODMAN: I was struck by how little attention this latest report that you’ve put out has gotten, when you’re talking about 7 million children — and it could well be more children — being detained, imprisoned, held in some way around the world. Some of the media tried to discredit it based on the news conference that you held, talking about a number you used. And I’m wondering if you could comment quickly on this, talking about the number of children in detention in the United States, in immigration detention?

MANFRED NOWAK: Yes, it was a number that dated back to 2015, still under the Obama administration, but it was the latest reliable number that we had on the total number per annum that are detained in immigration detention in the United States. Currently, the latest figures that we have are 76,000 in 2019, so it’s not that much a difference. And the U.S. is still the country with the highest number of children held in migration detention worldwide.

AMY GOODMAN: And so, what you’re saying is there’s been a continuum from the Obama to the Trump administration.

AMY GOODMAN: Finally, the legacy of the torture program of the United States, you having served for years as the U.N. rapporteur on torture?

MANFRED NOWAK: Of course, it was a very bad precedent. And in many other countries who said, “The United States is the country that founded democracy and human rights more than 200 years ago. They are now officially applying torture, so why shouldn’t we do the same? Because we are also dealing with terrorists.” And so, that was really undermining the absolute prohibition of torture, and that’s a very, very negative long-term effect of the Bush administration

AMY GOODMAN: Well, we will certainly link to your report on the imprisonment of children worldwide. Your figures — oh, the new global study on children detained, deprived of liberty. Your number, at least 7 million. Manfred Nowak, Austrian human rights lawyer, former U.N. rapporteur on torture from 2004 to 2010.

We will be live-streaming today’s impeachment hearing at democracynow.org starting at 10 Eastern Standard Time. That does it for our show. Special thanks to Stockholm’s Open Channel, Stockholm’s only independent, grassroots, non-commercial TV station committed to free speech. I’m Amy Goodman. Thanks so much for joining us. 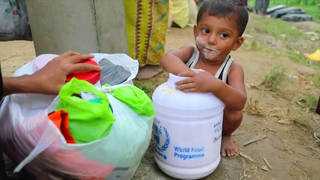