With one day left to pass a government spending bill before today’s midnight deadline to avert another government shutdown, both the House and Senate passed the measure Thursday that came out of the bipartisan conference committee earlier this week. The bill includes nearly $1.4 billion to build 55 miles of new border barriers out of steel, far less than the $5.7 billion requested by President Trump. Democrats quickly condemned the news, and consumer rights nonprofit Public Citizen vowed legal action against him. We speak with Public Citizen President Robert Weissman.

AMY GOODMAN: With one day left to pass a government spending bill before tonight’s midnight deadline to avert another government shutdown, both the House and Senate passed the measure Thursday that came out of the bipartisan conference committee earlier this week. The bill includes nearly $1.4 billion to build 55 miles of new border barriers out of steel, far less than the $5.7 billion requested by President Trump.

Senate Majority Leader Mitch McConnell took to the Senate floor Thursday to announce President Trump’s decision to sign the spending bill. As some had speculated, and many Democrats feared, McConnell confirmed Trump’s plan to declare a national emergency in an attempt to circumvent Congress for his $5.7 billion in border wall funding.

SENATE MAJORITY LEADER MITCH McCONNELL: I’ve just had an opportunity to speak with President Trump. And he—I would say to all my colleagues, he’s indicated he’s prepared to sign the bill. He will also be issuing a national emergency declaration at the same time. And I’ve indicated to him that I’m going to prepare—I’m going to support the national emergency declaration. So, for all of my colleagues, the president will sign the bill. We’ll be voting on it shortly.

AMY GOODMAN: McConnell’s vow of support came despite reports that he warned Trump against the move, saying it could split the Republican Party and prompt a resolution disapproving the emergency declaration. Democrats quickly condemned the news. This is House Speaker Nancy Pelosi.

HOUSE SPEAKER NANCY PELOSI: Did I say I was filing a legal challenge?

REPORTER: You said Democrats would challenge.

HOUSE SPEAKER NANCY PELOSI: I may. That’s an option. And we’ll review our options. But it’s important to note that when the president declares this emergency, first of all, it’s not an emergency, what’s happening at the border. It’s a humanitarian challenge to us. The president has tried to sell a bill of goods to the American people. But putting that aside, just in terms of the president making an end run around Congress.

AMY GOODMAN: Trump is set to speak this morning at 10 a.m. If he declares a national emergency, the consumer rights nonprofit Public Citizen has vowed legal action against him, saying the move, quote, “will constitute an outrageous abuse of power—perhaps the most dangerous yet by the unstable and increasingly autocratic President Trump,” unquote.

ROBERT WEISSMAN: It’s great to be with you.

AMY GOODMAN: So, Rob, talk about what your plans are for today.

ROBERT WEISSMAN: Well, we’re going to see what happens, if the president actually goes forward and issues this outrageous emergency declaration. If he does, we’re prepared to sue to block the declaration. And we’re also going to be working on our own and with hundreds of allies to get Congress to pass a resolution to disapprove the emergency declaration, which it has the ability to do.

AMY GOODMAN: So, explain what this national emergency resolution would do.

ROBERT WEISSMAN: Well, we don’t know, and we’re not going to know until the president acts. But it seems that what he’s going to claim is that there is a national emergency at the border, and that therefore he can move money around, that has not been appropriated for the purposes of building the racist wall, to in fact build the racist wall. There is a legal structure in place for how to declare an emergency, and the president does have authority under other laws to move money around, if in fact there is a national emergency. So, we’re going to sue, again, based on what he does, but challenging the idea there’s an emergency and also challenging whether the way he’s moving the money is legal under the statutes that exist.

But the real big issue is going to be whether people turn out in droves to protest this and say, “Not only do we not want a wall, but we don’t want the president declaring emergencies to get around the will of Congress.” If this president is able to declare an emergency to build a wall, around a fictitious claim of urgency, against the express interest of the—express intent of Congress, there’s really no limit to what he might do in the future with an emergency declaration. People might think this sounds really scary, almost like martial law. They should think it sounds really scary, and they should act appropriately.

AMY GOODMAN: So, what can Congress do? I mean, it doesn’t only have to come through a lawsuit, the challenge.

ROBERT WEISSMAN: That’s right. So, under the National Emergencies Act, Congress has express authority to pass a resolution of disapproval for the emergency declaration. And I think the House is going to move pretty quickly to do that. If the House does it, the Senate must consider it. So this is going to come up in the Senate.

AMY GOODMAN: Let me go to Joaquin Castro, the congressmember from Texas, in his conversation with CNN, who said he would file a resolution to block Trump’s declaration of national emergency.

REP. JOAQUIN CASTRO: I don’t think that it’s a national emergency. I think this would be a fake emergency. If you look at the active national emergencies right now, those mostly revolve around national security issues. And so, I’m prepared, if the president does declare a national emergency to build his border wall, to file a joint resolution under the National Emergencies Act that would essentially terminate his declaration. And we would have a vote, either on my resolution or somebody else’s, on the House floor. And then it’s my understanding that that resolution would have to be voted upon in the Senate. And there have been very critical comments that have been made by senators, including Republican senators, about the president’s ability and the wisdom of declaring a national emergency for this purpose.

AMY GOODMAN: And House Speaker Nancy Pelosi warned that by calling an unwarranted national emergency, Trump is setting a precedent for future presidents.

HOUSE SPEAKER NANCY PELOSI: You want to talk about a national emergency? Let’s talk about today, the 1-year anniversary of another manifestation of the epidemic of gun violence in America. That’s a national emergency. Why don’t you declare that emergency, Mr. President? I wish you would. But a Democratic president can do that. Democratic president can declare emergencies, as well. So, the precedent that the president is setting here is something that should be met with great unease and dismay.

ROBERT WEISSMAN: Right. So, I think Castro is describing the process that’s going to go forward. And he’s right to say, I assume, this will pass the House, a resolution of disapproval. But it really might also pass the Senate. There have been a number of Republicans who say they’re worried about this. And they’re going to be tested to see whether they stand with their principle or whether they stand with their party’s president. And we’re going to find out. Now, if it does pass by a majority in the Senate, as well, Trump can veto the resolution. That would require two-thirds in both houses to override that veto. That will be pretty tough. But it’s still very significant if in fact he’s forced to veto a resolution of disapproval.

Pelosi is speaking to the implications of a national emergency. She’s sending a message to Republicans, saying, “Look, if you think you’re going to be able to get away with this and our side’s not going to use this, think again—in ways that are very foreseeable, much more grounded in reality, like climate change, an actual global emergency of the highest proportion. Be careful what you wish for.”

But what I’m most worried about is this president doing it not just this time, but again. It’s easy to imagine him declaring a national emergency to ban public protest and to deploy military domestically. He might trump up claims, as it were, about gang violence, and we suddenly have sweeps of people of color communities around the country. Those extreme scenarios, they’re not so extreme with this president. And whether or not they might move forward depends both on how the national emergency is treated in the courts, but especially by how it’s received by the American people and Congress.

AMY GOODMAN: And what do you think about the courts, what they would do?

ROBERT WEISSMAN: It’s up for grabs, is the answer. I mean, we think we’re going—

AMY GOODMAN: Has Mitch McConnell changed the courts enough at this point, with the scores of conservative judges he has pushed through?

ROBERT WEISSMAN: Well, there’s two parts to it. One is, the law is fairly ambiguous. When the Congress passed the National Emergencies Act and other emergency statutes, they really didn’t have in mind Trump. They sort of expected people who would use the law in good faith. And more or less, that’s what’s occurred in the past. So, the president does have some pretty broad latitude under the statute to define what’s an emergency.

We think, even so, in this case, it’s plainly not an emergency. There’s not really any problem. It has no sense of urgency. And the president’s powers, in this regard, are at its lowest ebb, because he’s trying to change spending decisions that Congress has made.

So, there’s the—first is the legal question, which is not clear-cut. And then there’s the background of the courts. And even if it were clear-cut, it would be a mistake to assume that the Supreme Court, at the end of the day, is going to side with civil liberties or separation of powers or really anything else other than President Trump. 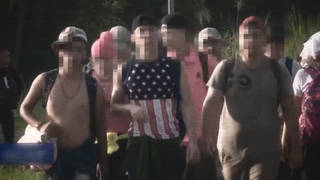