A nationwide campaign has been launched to find a blood stem cell donor for a 29-year-old journalist who was recently diagnosed with an aggressive form of leukemia. Liyna Anwar is an Indian-American producer who used to work at StoryCorps. She desperately needs a stem cell transplant, but she does not match any of her family members or the 19 million people in a national registry. Her search for a match is made more difficult because South Asians are underrepresented in the national registry. A campaign urging people of South Asian descent to donate stem cells has been launched in Anwar’s name. It’s called #SwabForLiyna. We speak with her brother, Dr. Abbas Anwar, and an expert on acute myelogenous leukemia, Dr. Azra Raza. We also speak with Dave Isay, the founder of StoryCorps.

AMY GOODMAN: This is Democracy Now!, democracynow.org, The War and Peace Report. I’m Amy Goodman. A nationwide campaign has been launched to find a blood stem cell donor for a 29-year-old journalist who was recently diagnosed with an aggressive form of leukemia. Liyna Anwar is a producer who used to work at StoryCorps. She desperately needs a stem cell transplant, but she doesn’t match any of her family members or any of the 19 million people in a national registry. A campaign urging people of South Asian descent was launched to donate stem cells, to register in Liyna’s name. The campaign, which was promoted online by celebrities like Mindy Kaling and Hasan Minhaj, is called #SwabForLiyna.

NARRATOR: Beloved StoryCorps producer Liyna Anwar, who recorded the story you’re about to see, was recently diagnosed with an aggressive form of leukemia and needs a blood stem cell transplant. She has not matched with her family or any of the 20 million donors in the registry. So this is where you come in. Liyna needs new donors to join Be the Match. And she’s most likely to match someone from her own ethnic background, so we’re especially looking for donors of South Asian descent. Only 1.3 percent of people in the registry are South Asian. Sign up to see if you could be her match, and share join.bethematch.org/swabforliyna or text ”LIYNA” to 61474. The world needs Liyna to keep telling stories.

AMY GOODMAN: On Thursday, I spoke with Liyna’s brother, Dr. Abbas Anwar. I asked him to explain more about Liyna’s condition and what treatment could help her.

DR. ABBAS ANWAR: Liyna has been diagnosed with an aggressive form of leukemia known as acute myeloid leukemia, or AML. And she was diagnosed back in December. And it requires some pretty aggressive chemotherapy, and so she’s been undergoing that over the last two, two-and-a-half months. But, ultimately, her best chance of cure is going to be, like you said, a blood stem cell transplant. And that’s what we’re trying to kind of work out right now. While she’s still kind of battling the cancer, we’re trying to find her that perfect match.

AMY GOODMAN: And what does that mean? How do you find this match?

DR. ABBAS ANWAR: So, they look at very specific markers on the stem cells, and I think there are about 10 markers that they look at. And so, so far, no one in the family and no one in the registry has been a complete perfect match. And so, just getting more and more people on the registry, and specifically South Asians, is a higher chance of getting a match with them.

AMY GOODMAN: How does the system work, Abbas?

DR. ABBAS ANWAR: So, the process of joining the registry is actually relatively easy. You just kind of register online, and that takes about two or three minutes. They send you a swab kit. And it’s basically a cheek swab that you swab your cheek, and you put it back in the pre-marked envelope, and you send it back in. And then, within a few weeks, you’re on the registry. And then you can, you know, potentially save Liyna’s life or anyone’s life that needs this type of transplant.

AMY GOODMAN: What about your family? Is anyone a match or a partial match? And what does that even mean?

DR. ABBAS ANWAR: Yeah, so, no one is a perfect match, meaning no one has matched all of those 10 little surface markers that they look for on those stem cells. I am the closest match. I matched about half. And so, while that’s not obviously perfect, if it comes to it and we can’t find a match on the registry and through all the efforts that have been done, then I’m kind of like a second option. I could be used, if needed, if they don’t find anyone better than me.

AMY GOODMAN: Well, tell us a little about who Liyna is. You’re her brother, after all.

DR. ABBAS ANWAR: Yeah, so, Liyna is a very charismatic, outgoing girl. And so, she has loved journalism. She loves to tell other people’s story and get out there and hear what people have to say and their opinions on different topics. And so, this has kind of been a shock for all of us. But Liyna has really taken it in stride. It is a little odd for her to be kind of on the other end of the journalistic spectrum, but she’s kind of, you know, getting more open to it now and realizing that this is important to help save her life.

AMY GOODMAN: And physically, how is she doing right now, Abbas?

DR. ABBAS ANWAR: Liyna’s doing remarkably well, thankfully. Initially, some of the chemotherapy was very aggressive, and she had a tough time within the first couple weeks. But over the time, she’s kind of recovered. She’s getting some other chemotherapy that’s not as aggressive but still has some side effects. But through it all, she’s kind of maintained her positivity, and so that’s very nice to watch.

Well, for more on Liyna’s case, we’re joined by two guests. Dave Isay is founder of StoryCorps, author of the book Callings: The Purpose and Passion of Work, among others. Dr. Azra Raza is professor of medicine and director of the Myelodysplastic Syndromes, or MDS, Center at Columbia University. She is an expert on AML, or acute myelogenous leukemia, which is what Liyna has.

Thank you so much, both, for being with us. Dr. Raza, explain this database, what people can do and why so few South Asians, people of South Asian descent, and African Americans know about this database.

DR. AZRA RAZA: It’s a very important topic, and opportunity is there now to raise awareness about where we are missing the boat. One of the things that keeps me up late at night, since the last three decades, is why we have not improved treatments for this disease. In 1977, Amy, when I came to this country, we were treating acute myeloid leukemia, that Liyna has, with two drugs called “7+3”—seven days of one drug, three days of another. Today, in 2019, we are still doing the same. And the only cure we can offer our patients is really with transplant.

AMY GOODMAN: And explain why it’s so important for people to contribute.

AMY GOODMAN: Not financially, but to do these swabs and what that entails.

DR. AZRA RAZA: It’s very simple. The only potential cure for her will come from a bone marrow or stem cell transplant. For that, we have to find a match donor. As you heard from her brother, the siblings are not a match. So we now have to look outside for a perfect match. And to look outside, from 1986 onwards, the bone marrow donor registry was created. And people are encouraged to sign up for it. But the education has not been there at a community-wide level.

AMY GOODMAN: And why is race and ethnicity so important?

DR. AZRA RAZA: Because the number of individuals who have chosen to give their cells to random strangers are generally Caucasians, because the patients have been Caucasians mainly. And since the minorities, like South Asians or African Americans or Hispanics, they are a minority, so the patients are in a minority, and therefore their potential donors are in a minority. So, today, if you are a Caucasian and look for a match in the unrelated donor registry, there’s a 70 to 80 percent chance that you will find a perfect match. For African Americans, it falls drastically to 20 percent, to 30 percent at best.

AMY GOODMAN: So, Dave Isay, talk about this campaign, and talk about Liyna. She worked with StoryCorps, the organization that you founded.

DAVE ISAY: For years, yeah. Liyna is an incredibly talented producer who has devoted her life to telling the stories of us, of everyday people. And we are hoping—and this campaign is led by her family—to have now everyday people step up and help Liyna continue to tell stories for a long, long time to come.

So we’re asking people to do this very simple swab. It’s really—I mean, I knew nothing about this until Liyna was diagnosed. You know, you swab your cheek. And in Liyna’s case and in the vast majority of cases, a stem cell transplant, if you’re a match, is nothing more than an extended blood draw, four or five hours.

AMY GOODMAN: But that’s not what you have to give at the beginning.

DAVE ISAY: At the beginning, it’s just—and there’s a one in 10 chance, when you give this, that you’ll be a match. If you are a match, you save a life. And so far, there have been about—I think it’s about 5,000 people—88 percent of them are people of color—who have donated in Liyna’s name. None of them are a match for Liyna yet. That means that five lives have been saved. And what we want to do—

AMY GOODMAN: For other people who are looking for this.

AMY GOODMAN: So, where do people call?

DAVE ISAY: So, you can go—there’s an organization called Be the Match. And you can just go to Be the Match. You sign up. It’s free, if you’re 46 and under, something like that.

AMY GOODMAN: We have 15 seconds.

DAVE ISAY: And then they send you a swab. You send it back. It’s very simple. And then, if you’re a match, you’re a match. They tell you, and you have a choice to donate. Bethematch.org, and you can do backslash SwabForLiyna, or text ”SWABFORLIYNA” to 61474.

AMY GOODMAN: And Liyna is spelled L-I-Y-N-A. I want to thank you both for illuminating us on this issue. All the every best to Liyna. Dave Isay, founder of StoryCorps. Dr. Azra Raza, professor of medicine and director of the MDS Center at Columbia University, an AML expert.

I’ll be speaking in Denver, Colorado, tonight at East High School. Check our website. I’m Amy Goodman. Thanks so much. 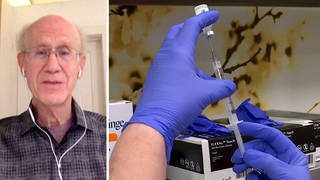