After months of protest, the Sudanese military ousted President Omar al-Bashir on Thursday, ending his nearly 30 years of authoritarian rule. Tens of thousands of protesters marched in celebration on the streets of Sudan. The military has set up a transitional military council to rule the country for two years, according to a televised statement by Sudan’s minister of defense. The news comes after months of protests demanding al-Bashir’s resignation. Protesters have been staging a massive sit-in in the capital, Khartoum, since Saturday. Rights groups say at least 50 people have been killed in Sudanese protests since December. The government has been accused of jailing hundreds of activists and critics of the president, shutting down press outlets and barring foreign reporters from covering the protests. We speak with Marine Alneel, a Sudanese activist who was arrested for demonstrating against al-Bashir in January.

AMY GOODMAN: This is Democracy Now! I’m Amy Goodman, with Nermeen Shaikh, as we turn to another breaking story.

NERMEEN SHAIKH: Yeah, we turn now to Sudan, where the military has overthrown Sudanese President Omar al-Bashir, who has ruled Sudan for the past 30 years. Al-Bashir is reportedly now being held under house arrest. Tens of thousands of protesters marched in celebration on the streets of Sudan as the news broke that al-Bashir’s authoritarian rule has ended. The Sudanese military has set up a transitional military council to rule the country for two years, according to a televised statement by Sudan’s minister of defense.

AMY GOODMAN: The news comes after months of protest demanding al-Bashir’s resignation. Protesters have been staging massive sit-ins in the capital, Khartoum, since Saturday. Over the weekend, demonstrators gathered outside the military headquarters, which is also the residence of al-Bashir, amidst reports of tear-gassing and stun grenade attacks by security forces. Reports on the ground say some soldiers began siding with protesters, signaling a loss of military support for al-Bashir. Rights groups say at least 50 people have been killed in Sudanese protests since December, while the government has been accused of jailing hundreds of activists and critics of the president, shutting down press outlets and barring foreign reporters from covering the protests.

For more, we’re joined here in New York by Marine Alneel. She’s a Sudanese activist who was arrested for demonstrating against Bashir earlier this year.

Welcome to Democracy Now! So, you were in the streets. You were in jail. Talk about what’s just taken place.

MARINE ALNEEL: What’s just taken place is a military coup. And although it is a matter of celebration for us to have ended Omar al-Bashir’s reign for over—almost 30 years, but it is only the first step. We still need to be out there in the streets. We still need to make sure that we are not under another military rule.

NERMEEN SHAIKH: Well, explain, Marine, what exactly you were demonstrating against. It was not just the individual, Omar al-Bashir, but a larger system. Talk about that.

MARINE ALNEEL: Exactly. So, the demands of the people were the fall of the entire regime, not just Omar al-Bashir. It is difficult, because the en cause government has been there for almost 30 years, and they’ve infiltrated almost every institution in Sudan. And they have disintegrated any institution that does not have the NCP, the ruling party, in it. So it’s difficult to completely uproot them and remove them from the government. But that is what we are demanding.

NERMEEN SHAIKH: And the role of the military in Sudan?

MARINE ALNEEL: Well, the military has also been politicized. All of its leadership is pro-NCP. And especially after the state of emergency that has been declared by Omar al-Bashir recently, the whole government has been a military government. So, what happened now is not the fall of the regime, but it’s basically within the regime, the people, individuals, within the regime conflicting amongst themselves.

AMY GOODMAN: So, the ICC wants him—the International Criminal Court—for crimes against humanity, for war crimes. Can you explain why you wanted Omar al-Bashir ousted? And also, respond to the call for, as the military says they’ll rule for two years, people in the streets continuing to protest and saying, no, they want civilian rule, not military rule.

MARINE ALNEEL: True. So, Omar al-Bashir came through a military coup. There have been two elections, pseudo-elections. We still believe that it’s not democratic, although theoretically or on paper it is democratic. But it’s definitely not democratic. No one in the streets believes that.

And what we are calling for, and what has been called for by the Sudanese Professionals Alliance, who’s been leading and organizing these demonstrations, is the fall of the regime, disintegrating the entire government and transferring the rule to a civilian government.

Now, this military council is not the transitional government we’ve been looking for, but it is still a reason to celebrate. I’m sure people in Sudan are feeling a plethora of feelings right now. It was a big joy when we realized something is going to happen and Bashir might step down, but then, you know, everybody felt conflicted once the announcement came by the military, the minister of defense, Ibn Auf, who’s previously been the vice president. So, this is definitely still the regime itself. It is ironic for him to say that “We apologize for what the regime has done.” He does represent the regime.

NERMEEN SHAIKH: Well, you participated in the protests, but so did a large number of women. A photo of a woman who’s standing on top of a car with her arm raised in a crowd of protesters has gone viral as a symbol of the revolution there. Talk about the role of women.

MARINE ALNEEL: Well, it’s a beautiful photo. It’s an iconic photo. And the role of women has been central since the beginning of the demonstrations in December. Actually, what you notice is that they are there in large numbers. Sometimes a lot of women joke about how the men, the young men, in the protests would ask the women to take shelter when it gets violent, but once they do that, there are only like five people left in the protest once the women are gone.

AMY GOODMAN: The woman in the photo is named Alaa Salah?

AMY GOODMAN: The U.S. was working with Omar al-Bashir, despite the ICC wanting him for crimes against humanity and the popular uprising, seeing him as a force for counterterrorism in the region, the FBI working with him, making deals, as early as just months ago. What about the role of the U.S.?

MARINE ALNEEL: Well, that brings us to another individual who we are also—as protesters, we want to see him out, definitely: Salah Gosh. He is the director of the National Intelligence and Security Services. He’s been on very good terms with the CIA. He has been the U.S.’s man in Sudan. So, these are the individuals that we definitely want to see out.

But we are not done. We are nowhere near done. It’s merely a step. And we’re still waiting for the SPA. I mean, we’ve been following the directions of the Sudanese Professionals Alliance since December. There’s no reason to divert from that now. So, as of half an hour after the military announcement, they still have not said anything about it, but I’m guessing that they will demand or request people to remain on the streets. But there is an issue of the safety of the people, because the announcement did also come with a curfew from 10 p.m. to 4 a.m.

AMY GOODMAN: Do you think we’re seeing an African Spring here, from Bouteflika in Algeria to Omar al-Bashir being ousted in your country of Sudan?

MARINE ALNEEL: A lot of the times these terms can be a bit misleading, when we kind of put a lot of different countries in one category. What’s happening in Algeria is very different to what’s happening in Sudan. I mean, it can be something very motivational to call it an African Spring, but we have to pay attention to the differences. Sudan’s institutions have been disintegrated. It is a much more layered and complicated situation.

AMY GOODMAN: Well, we will certainly continue to cover it. Marine Alneel, we want to thank you for being with us.

AMY GOODMAN: Sudanese activist based here in New York, just back from Sudan.

That does it for our show. I’ll be with Noam Chomsky tonight at the Old South Church in Boston. Tomorrow, Democracy Now! will bring you the speech and conversation with Noam Chomsky. I’m Amy Goodman, with Nermeen Shaikh. Thanks so much for joining us. 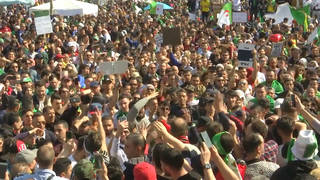