As millions celebrate Earth Day around the globe, we speak with organizer Dallas Goldtooth about indigenous-led anti-pipeline activism in the United States. President Trump signed two executive orders earlier this month to facilitate the approval of pipeline projects at a federal level, limiting states’ ability to regulate such projects. The move is intended in part to clear the way for permitting on the northeastern Constitution pipeline, which has stalled after New York invoked the Clean Water Act to reject the project on environmental grounds. This comes as climate activists have filed a federal lawsuit with the ACLU challenging three South Dakota laws that they say violate the First Amendment rights of anti-pipeline organizers. Dallas Goldtooth is one of the plaintiffs in the ACLU lawsuit and an organizer with Indigenous Environmental Network.

AMY GOODMAN: This is Democracy Now! I’m Amy Goodman. Millions around the world are celebrating Earth Day today, following a week of enormous climate activism here in the U.S. and abroad. In the United Kingdom, nearly 1,000 people have been arrested after a week of actions, as demonstrators with the group Extinction Rebellion shut down bridges and streets, occupied public landmarks, superglued themselves to trains and the Shell Oil headquarters, and rallied across London to demand radical action on climate change. On Sunday, 16-year-old Swedish activist Greta Thunberg addressed a crowd of thousands at London’s Marble Arch.

GRETA THUNBERG: We are now facing an existential crisis, the climate crisis and ecological crisis, which have never been treated as crisis before. They have been ignored for decades. And for way too long, the politicians and the people in power have gotten away with not doing anything at all to fight the climate crisis and the ecological crisis. But we will make sure that they will not get away with it any longer.

Back in the U.S., hundreds of protesters rallied at New York City Hall and marched across the Brooklyn Bridge Thursday to demand a halt to the proposed Williams pipeline project, which would carry fracked gas from Pennsylvania’s shale fields under the New York Harbor. President Trump signed two executive orders earlier this month to facilitate the approval of pipeline projects, limiting states’ ability to regulate such projects, the moves intended in part to clear the way for permitting on the northeastern Constitution pipeline, which has stalled after New York invoked the Clean Water Act to reject the project on environmental grounds. This comes as climate activists have filed a federal lawsuit with the ACLU challenging three South Dakota laws that they say violate the First Amendment rights of anti-pipeline organizers.

Earlier this month, Nermeen Shaikh and I sat down with an organizer with Indigenous Environmental Network. He is Dallas Goldtooth, Dakota and Diné, who’s one of the plaintiffs in the ACLU lawsuit. I started by asking him to respond to Trump’s executive orders.

DALLAS GOLDTOOTH: What we’re seeing right now with these executive orders is nothing but an act of aggression against the authority for states to protect their homelands or protect the residents of their state and the lands within the borders of those states, mainly targeting the Clean Water Act. Really, what Trump wants to do is take away the states’ abilities to enforce environmental regulations against pipeline projects or other infrastructure, fossil fuel projects, and take and give that power solely to the federal government. You know, this is—it’s kind of absurd that, you know, Trump, being a representative or the figurehead of the Republican Party, is wholeheartedly endorsing an ideology that the federal government has a final say over what happens within the borders of a state and that the state has very little recourse to address these issues. The other—there are just two executive orders, so that was the first one.

The second one really specifically talked—focuses on the cross-border—the border crossing of pipelines. In this regard, we’re talking about Keystone XL. I know Enbridge, Enbridge Line 3, was also one of those pipelines that had to deal with crossing the border from Canada to transport tar sands oil. And really what the president is trying to do, and he did this a couple weeks ago by approving Keystone XL a second time, is saying that he, as the president, has the sole power to approve these projects, and is encouraging the State Department to say—to act only as advisers to the president to sign these projects.

And there’s something really—something really insidious and dangerous about this, that is just a part, a continuing part, of Trump’s legacy for overreaching his executive powers, is that the president has stated that because he is the president, he is not a federal agency, therefore he’s not beholden to any environmental regulations that federal agencies have to follow, in particular the National Environmental Protection Act, parts of the Clean Water Act. You know, he’s saying that, “As the president, I actually am—I don’t have to follow those, because I’m not a federal agency.” And that’s very, very dangerous precedent to start here, especially as we look towards a rapid expansion of fossil fuel development in this country at this current moment and what we’re trying to fight against in the protection of Mother Earth and the sacredness of the land itself.

NERMEEN SHAIKH: And, Dallas Goldtooth, could you talk about, in fact, some of the efforts that states have been making to resist, block these pipelines, in Pennsylvania, for example, and elsewhere?

DALLAS GOLDTOOTH: Yeah. Over the past decade, we’ve seen a lot of states become more aware about the dangers of fossil fuel infrastructure projects and the risks that they pose to drinking water and to clean air. I think, on the big picture, we’re seeing a greater understanding about how these projects lock us into more fossil fuel development, and therefore add to the climate chaos that we’re seeing with the increase of greenhouse gas emissions. And so you’re seeing some states, like Pennsylvania or even New York, who are taking steps to address that by putting moratoriums on fracking development or having a more stringent process or a more stringent evaluation of pipeline projects and their impacts, whether it’s very specific or cumulative impacts on climate overall. And one of those examples that the president has referenced specifically is how New York state has used the Clean Water Act to to halt the continuation of the Constitution pipeline in that area.

On the flip side, we’re also seeing states who are trying their very hardest to increase fossil fuel development in their areas. And one way that they’re doing that is to suppress the ability for common, everyday citizens to publicly protest against them or to use their First Amendment rights to speak out against these projects’ impacts on their communities.

AMY GOODMAN: Last month, the Rainforest Action Network, along with a coalition of environmental groups, including your group, the Indigenous Environmental Network, released its annual fossil fuel finance report card called “Banking on Climate Change.” The report showed that 33 of the world’s largest banks have financed $1.9 trillion into fossil fuels since the Paris Agreement was signed in 2016. Michigan Democratic Congressmember Rashida Tlaib referenced the report as she questioned CEOs from the nation’s largest banks Wednesday at a congressional hearing called “Holding Megabanks Accountable.”

I want folks—don’t say that you’re committed to clean and sustainable financing, because your companies’ words are not consistent with your actions. I would call this gaslighting. That’s kind of what we call it in the neighborhood. But for the sake of this hearing, I’ll say that you are greenwashing your own track record in duping the American people into believing that you are helping address climate change. On the record, will any of your banks make a commitment to phase out your investments in fossil fuels and dirty energy and align your investments with the goals of Paris climate agreement, to help protect our planet and communities I grew up in? That goes to all of you, if you guys can answer that. Mr Corbat?

MICHAEL CORBAT: We have—we are in the business of supporting fossil fuel companies, many of which are U.S.-based companies.

AMY GOODMAN: That’s Michael L. Corbat, CEO of Citigroup, responding to that question from Michigan Congressmember Rashida Tlaib. Dallas Goldtooth, overall, your response to what she is raising?

DALLAS GOLDTOOTH: You could hear a penny drop in that room when she asked that question. You know, she raised a great point, based on the report that I, again, was a part of. That was the fossil fuel financial report that was put out. You know, at the top of the list—I mean, what that report does is it lists the top banks who are financing fossil fuel production—or, fossil fuel expansion across the globe. And JPMorgan Chase is at the very top of that. Wells Fargo comes in a close second. The top leading banks in the United States are all heavily invested in fossil fuels. And that’s why we are leading a major divestment campaign, to make sure that we are holding these banks accountable.

AMY GOODMAN: That’s Dallas Goldtooth, Diné and Dakota activist, organizer with the Indigenous Environmental Network. To hear the whole conversation with Dallas, you can go to democracynow.org. 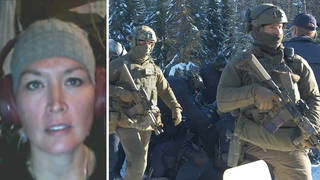