Economist Joseph Stiglitz: Capitalism Hasn’t Been Working for Most People for the Last 40 Years

We look at staggering inequality and the state of the U.S. economy with Nobel Prize-winning economist Joseph Stiglitz, who served as chair of the Council of Economic Advisers under President Clinton. Joseph Stiglitz is a professor at Columbia University and chief economist for the Roosevelt Institute. His latest book, out this week, is “People, Power, and Profits: Progressive Capitalism for an Age of Discontent.”

JUAN GONZÁLEZ: Well, Disney heiress Abigail Disney is speaking out against wage inequality, calling Disney CEO Bob Iger’s salary, quote, “insane.” In an opinion piece for The Washington Post published Tuesday titled “It’s time to call out Disney—and anyone else rich off their workers’ backs,” she wrote, quote, “I had to speak out about the naked indecency of chief executive Robert Iger’s pay. According to Equilar, Iger took home more than $65 million in 2018. That’s 1,424 times the median pay of a Disney worker. To put that gap in context, in 1978, the average CEO made about 30 times a typical worker’s salary. Since 1978, CEO pay has grown by 937 percent, while the pay of an average worker grew just 11.2 percent. This growth in inequality has affected every corner of American life.”

AMY GOODMAN: Those are the words of Abigail Disney. She went on to write, “At the pay levels we are talking about, an executive giving up half his bonus has zero effect on his quality of life. For the people at the bottom, it could mean a ticket out of poverty or debt. It could offer access to decent health care or an education for a child,” she wrote.

We spend the rest of the hour looking at inequality and the state of the economy with the Nobel Prize-winning economist Joseph Stiglitz, who served as chair of the Council of Economic Advisers under President Clinton. Joe Stiglitz is a professor at Columbia University, professor and chief economist for the Roosevelt Institute. His latest book is out this week: People, Power, and Profits: Progressive Capitalism for an Age of Discontent.

Joe Stiglitz, welcome back to Democracy Now! It’s great to have you with us. Why don’t you start off by talking about Abby Disney, what she had to say? She is the heiress of Disney, saying that Iger’s salary, the CEO, is “insane.”

JOSEPH STIGLITZ: She’s absolutely right. You mentioned that in the late '70s it was 30 to one, on average; today it's over 300 to one. And it’s not as if our CEOs have gotten 10 times as productive in those intervening years. It’s not as if—you know, American CEOs get paid so much more than their workers relative to those in Europe and even more relative to those in Japan. And it’s not because our CEOs are that much more productive. It’s because we have a real problem in our corporate governance laws, in our norms, that allow them to take away that much money.

And that money—you know, she points that it could have gone to—made a very big difference to workers. That money could also have gone into investment. You know, one of the striking things about the United States today is that while the rates of return are very, very high relative to what they’ve been in the past, the levels of investment have been low. So, you would have thought those two would have gone together, but with CEO pay and share buybacks being so large—trillion dollars of share buybacks last year—the money isn’t going either to workers or to investment.

JUAN GONZÁLEZ: And then, of course, you have to add the taxation policy, which is gradually protecting wealth rather than trying to create a level playing field, whether it’s with the elimination of the inheritance tax or the ending, effectively, of progressive taxation. That means that all that money that they get, they get to keep, as well, right?

JOSEPH STIGLITZ: Yeah. You know, this is a time where we—given the growth of inequality, you would have thought the natural response is to ramp up a progressivity of our tax system. And we’ve done just the opposite. The 2017 tax bill is a real illustration of that. It increased the tax rate on a majority of people in the second, third and fourth quintile. In other words, the vast middle class, when the bill is fully implemented, will see higher tax rates, in order to give a tax cut for billionaires.

Another way I put it as an economist, going back to your question about Abigail Disney, they talk about incentives. What kind of a CEO do you need to pay $60 million to get him off the golf course? You know, you don’t pay a surgeon who’s doing heart surgery, and say, “I’ll pay you a lot of money, provided I survive. But if I don’t, by the way, you don’t get anything.” Surgeons are professionals. They do all that they can to make sure that the surgery enables you to live. Our CEOs ought to be that kind of professional. And they used to be that kind of professional. They say, “My job, I’m trusted by my corporation to do the best I can for the corporation, and I’ll give it all. And you’re paying $5 million or $10 million to do that. That’s more than adequate.” And in other countries, people have that kind of sense of responsibility. But not, evidently, CEOs like that of Disney.

AMY GOODMAN: Joe, your book is titled People, Power, and Profits: Progressive Capitalism for an Age of Discontent. Should it be progressive capitalism or worker power? I mean, this is increasingly becoming the issue, when you have the top candidates and most popular political figures, like AOC, Alexandria Ocasio-Cortez, like Bernie Sanders, one of the top presidential contenders, proudly calling themselves Democratic Socialists.

JOSEPH STIGLITZ: Yeah. So, in those few words in the title, I try to pack an awful lot. So, one of the things I wanted to say is that any modern economy, the market is going to have to play an important role. So, that’s why I wanted to use the word “capitalism.” But I wanted to signal that the form of capitalism that we’ve seen over the last 40 years has not been working for most people. And that’s why I talk about people. We have to have progressive capitalism. We have to tame capitalism and redirect capitalism so it serves our society. You know, people are not supposed to serve the economy; the economy is supposed to serve our people.

The other word I talk about is “power.” Here, what I’m trying to capture is, there’s a real sense of powerlessness by a lot of Americans—powerlessness in the economy and powerlessness in our politics. It’s because of the increased concentration of market power in our economy, the growth of those monopolies, tech monopolies, monopolies in so many sectors, which is one of the factors that have contributed to all this inequality. But there’s also—

JOSEPH STIGLITZ: Not to the extent that it has. You know, you can trace out the degree of monopoly power. And, yes, it was terrible at the end of the 19th century, and that’s why we passed anti-trust laws. And they worked for a while. We broke up Standard Oil. We broke up a lot of the other big monopolies. And then, around the middle of the 20th century, there was a set of ideas that were propagated by Milton Friedman at University of Chicago, that said, “The market is naturally competitive. Don’t worry about market power.” And that was just basically giving a blank check to the formation of more monopolies.

The idea that corporations will to try to exert that kind of exploitation for market power is an old one. Adam Smith talked about it. You know, he talked about this idea that the business leaders seldom get together, even for merriment, without getting a conspiracy against the general well-being. So, he was aware of it. But that’s why we passed laws to circumscribe it. And then we had this doctrine that says, “Don’t worry about it.” And now we see the consequences of not worrying about it. And it’s reached new, high peaks.

JUAN GONZÁLEZ: Well, I wanted to ask you about one section in your book where you’ve—and several of your articles—you’ve talked about China and what’s the economic model of China. In your book, you say, “For many of the billions in the developing world and emerging markets, China, using its distinctive [quote] 'socialist' market economy with Chinese characteristics, has provided a dynamic alternative vision to that of America, whose standing suffered a major blow with the 2008 crisis.” Now, China, to many folks, is basically a form of state capitalism, not really socialism, but state capitalism, yet it has had an enormous economic growth—7, 10% a year—and it’s raised hundreds of millions of people out of poverty.

JOSEPH STIGLITZ: About 740 million people out of poverty.

JUAN GONZÁLEZ: So, what does that say about the form of capitalism that we have in the United States, or even in Western Europe, that China is economically providing much more to its people these days than these systems are, in terms of where it came from?

JOSEPH STIGLITZ: Well, first, you have to remember they were catching up. And it proved to be an effective instrument for catching up. But there’s a price in terms of democracy. And I would have hoped that we would be a model, showing that you can have a kind of capitalism that actually works for people, the kind of progressive capitalism that I’ve been talking about, that can deliver growth, but not just for the 1% or one-tenth of 1%, but for the majority of our citizens.

JOSEPH STIGLITZ: I think you’re absolutely right. And I think it’s one of the forces that have undermined the way our economic system has worked. We haven’t been challenged, to put it in a way. But we are being challenged now, because so many people have done so poorly.

AMY GOODMAN: And when you say “we,” you mean?

JOSEPH STIGLITZ: United States, we as a country, but also Western Europe. To put it, you know, another way, in the 1950s, we aspired to be the first middle-class society. And we talked about education for all. We had infrastructure investment. We had a tax rate at the top of 90%, and we had the fastest rate of growth that we’ve ever had.

AMY GOODMAN: We have to break. When we come back, we want to ask you about how healthcare for all, how canceling of student debt, pre-K, how all of these issues can be financed under progressive capitalism—all the issues that are being put forward by a few of the Democratic candidates right now. Joe Stiglitz, Nobel Prize-winning economist, with us. Stay with us. 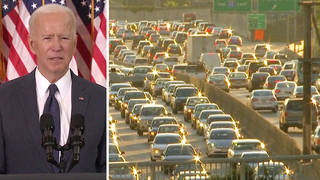