As a coup attempt is underway in Venezuela, activists are occupying the Venezuelan Embassy in Washington, D.C., to protest the U.S.-backed efforts at regime change. Activists with CodePink and other organizations have taken over the building with the permission of the Venezuelan government. Dozens are sleeping there every night to protest the ongoing attempted coup. Democracy Now! was inside the embassy with demonstrators on Tuesday.

AMY GOODMAN: Here we are, outside the Venezuelan Embassy. Tell us who you are, who you’re with and why you’re here.

ARIEL GOLD: I’m Ariel Gold, and I’m the national co-director for CodePink. CodePink has been here—we’re going on week three—since April 14th. And we’ve been here in order to protect this embassy from takeover by Guaidó, who is Trump’s puppet. And Trump has been trying to—Trump and Elliott Abrams—to orchestrate a coup in Venezuela. And taking over this building is part of that.

AMY GOODMAN: How has the U.S. been involved with the takeover of this building? I mean, this was the embassy. It’s the embassy of the government of Venezuela. The president elected is Maduro. So what’s happened here? Where are Maduro’s people? Where is the government?

AMY GOODMAN: Can you tell us who you are and why you’re here today?

KEVIN ZEESE: My name’s Kevin Zeese. I’m with Popular Resistance. I’m part of the Embassy Protection Collective. We’re here today because this embassy is under attack. The Secret Service has been coming around, taking pictures. So, I’ve been in contact with the State Department. They tell us they are going to, at some point, remove us. I asked them what are they going to charge us with. And I say, “We’re here legally. We’re not trespassing. The Venezuelan government, the elected government, allows us to be here. They gave us a key to come in. So we’re lawfully here.”

ARIEL GOLD: Living here. We are.

KEVIN ZEESE: We consider ourselves residents. We are tenants.

ARIEL GOLD: We’re making three meals a day, feeding up to a hundred people, because we have events every single evening, either educational or cultural, about all kinds of issues. And then we feed people.

AMY GOODMAN: Can you take us inside the embassy?

AMY GOODMAN: We’re walking to the back of the Venezuelan Embassy. Dangling from Ariel Gold of CodePink’s backpack, it says “Guaidó Not Welcome Here.” We’re going inside.

ARIEL GOLD: Here’s the key to the building—

ARIEL GOLD: —that we have, under permission from the Venezuelan government.

AMY GOODMAN: Can you tell us what these—this is a baseball jersey? Magglio Ordóñez is here. Kevin, you want to explain?

AMY GOODMAN: So, where are we going?

LILY TAJ: I’m Lily. I’m with CodePink. And so, basically, in this room, we all kind of gather here. We have our community meetings here, where we discuss the plans for the next day. We have all of our meals here. And right here we have our schedule of what we—we host events every night here, so cultural events, educational events. And so, this is kind of our calendar of what we have planned out for the week.

AMY GOODMAN: If you can tell me your name and what group you’re with?

KEI PRITSKER: Yeah, my name is Kei Pritsker. I’m with the ANSWER Coalition. So, I’m here, first and foremost, as a U.S. citizen and a U.S. citizen that sees a lot of problems in this country. Right now there are 40 million people in the United States that are living in poverty. There are entire cities that don’t have clean drinking water. And right here in Washington, D.C., we see luxury condos going up every single day. And outside these condos, outside these empty condos, are homeless people sleeping in the cold. And amidst all these problems, Donald Trump has declared a war on Venezuela. Now, Venezuela has not invaded the United States. Venezuela did not foreclose on millions of homes during the 2008 financial crisis. It’s not Venezuela causing the problems here in the United States. So we have to ask ourselves why Donald Trump is siding with rich white Venezuelans halfway across the world, over poor black and brown people right here in Washington, D.C.

ARIEL GOLD: We, here in the U.S., have a lot of nerve talking about “We have to go in and help the people of Venezuela.” If the U.S. were concerned with helping people, why would we be partnering with the terror government of Saudi Arabia in creating the worst humanitarian crisis on the planet? So, we don’t have to—

ARIEL GOLD: In Yemen. So, we don’t have to look any further than that to know what U.S. motivations are, to know that this is about Venezuelan oil, and this is about the 2020 election and how Trump is trying to frame himself, against Bernie Sanders, as opposing socialism, which—to prevent humanitarian crisis, when it’s actually the U.S. that is creating humanitarian crisis, creating death in Venezuela, death in Yemen. And U.S. sanctions, unilateral sanctions, on Venezuela are deadly.

KEVIN ZEESE: I was in Venezuela last May for the re-election of President Maduro. There was actually an election. He was not a dictator. Nine million people voted. Maduro received 6 million votes. There were more than 150 international election observers, and they unanimously came out and said that it met international standards for democracy, there was no fraud, and Maduro was legitimately elected. And comparing that to Guaidó, Guaidó won second place in the National Assembly election, 24% of the vote in the second-smallest state, with a tiny political party. He got in because the top two get in. And so—

AMY GOODMAN: He got in because?

KEVIN ZEESE: Well, the night—well, it was a process, actually, that began in January at the OAS. They had multiple meetings to try to resolve this. Leopoldo López was on from video conference. They had been working on this for early—since that long. And finally, they decided on Guaidó as their guy. And the night before that Guaidó self-appointed, Michael Pence called him and said, “We’re behind you if you do it.” As soon as Guaidó announced, Trump immediately endorsed him, got the right-wing governments in Latin America and the Western European countries to join him. Why? Because the example of an independent Venezuela is a powerful example that they don’t want to see.

AMY GOODMAN: We’re on the first floor of the Venezuelan Embassy. Aminta Zea, can you talk about what this—you’re using this space for? And describe it to us.

AMINTA ZEA: Yeah, sure thing. So, here is mainly where we have a lot of our cultural and educational events. We’ll have different speakers come out, basically every night, in order to kind of create more awareness over what is happening in Venezuela as a whole.

AMY GOODMAN: Kevin, describe this banner on the back of the first floor room of the embassy.

KEVIN ZEESE: This is President Chávez speaking to the U.N.—you can see the U.N. insignia—about the Global South and anti-imperialism. This is the famous speech where he said, “You can still smell the sulfur,” after George W. Bush had left. And expect that the opposition will be painting this over.

AMY GOODMAN: Why are you, as a member of CodePink, Ariel Gold, so invested in Venezuela?

ARIEL GOLD: Well, I see all of these issues connected, whether it’s the U.S.'s relationship with Saudi Arabia, whether it's U.S. support for Israel’s ongoing occupation. These are all issues where the U.S. is pushing imperialism across the world and creating situations that are harmful to the very people that live in those places. And this is like—this is really history in the making here. We’re here at this incredible moment in time where history is being made, and we’ve realized that there’s something that we can do. 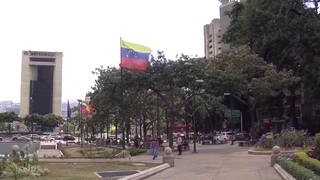