Kamala Harris Challenges Biden on Opposing Busing & Integration in 1970s: “That Little Girl Was Me”

The second night of the first Democratic presidential debate was billed as a face-off between front-runners former Vice President Biden and Senator Bernie Sanders, but it was California Senator Kamala Harris who took command of the stage Thursday night. Harris sparred with Biden over his recent comments about working with segregationists in the Senate and for his opposition to Delaware’s attempts to bus students in an effort to integrate its schools in the 1970s. “There was a little girl in California who was part of the second class to integrate her public schools, and she was bused to school every day. That little girl was me,” Harris said. We speak with Rashad Robinson, president of Color of Change.

AMY GOODMAN: This is Democracy Now! I’m Amy Goodman, as we turn to the second night of the first Democratic presidential primary debate, which was billed as a face-off between the front-runners former Vice President Joe Biden and Senator Bernie Sanders. But that’s not quite how it turned out. It was California Senator Kamala Harris who took command of the stage as she sparred Thursday night over Biden’s recent comments about working with segregationists in the Senate and for his opposition to Delaware’s attempts to bus students in an effort to integrate its schools in the ’70s.

SEN. KAMALA HARRIS: I’m going to now direct this at Vice President Biden. I do not believe you are a racist, and I agree with you when you commit yourself to the importance of finding common ground. But I also believe—and it’s personal. I was actually very—it was hurtful to hear you talk about the reputations of two United States senators who built their reputations and career on the segregation of race in this country. And it was not only that, but you also worked with them to oppose busing. And, you know, there was a little girl in California who was part of the second class to integrate her public schools, and she was bussed to school every day. And that little girl was me.

JOE BIDEN: It’s a mischaracterization of my position across the board. I did not praise racists. That is not true, number one. Number two, if we want to have this campaign litigated on who supports civil rights and whether I did or not, I’m happy to do that. I was a public defender; I didn’t become a prosecutor. I came out, and I left a good law firm to become a public defender. …

In terms of busing, the busing—I never—you would have been able to go to school the same exact way, because it was a local decision made by your city council. That’s fine. That’s one of the things I argued for, that we should not be—we should be breaking down these lines. But so, the bottom line here is, look, everything I’ve done in my career—I ran because of civil rights. I continue to think we have to make fundamental changes in civil rights. And those civil rights, by the way, include not just only African Americans, but the LGBT community.

SEN. KAMALA HARRIS: Do you agree?

SEN. KAMALA HARRIS: Well, there was a failure of states to integrate—

SEN. KAMALA HARRIS: —public schools in America. I was part of the second class to integrate Berkeley, California, public schools, almost two decades after Brown v. Board of Education.

JOE BIDEN: Because your city council made that decision. It was a local decision.

SEN. KAMALA HARRIS: So, that’s where the federal government must step in.

SEN. KAMALA HARRIS: —there are moments in history where states fail to preserve the civil rights of all people.

JOE BIDEN: I have supported the ERA from the very beginning—

JOE BIDEN: —when I ran for—

JOE BIDEN: I have supported the ERA from the very beginning. I’m the guy that extended the Voting Rights Act for 25 years. We got to the place where we got 98 out of 98 votes in the United States Senate doing it. I have also argued very strongly that we in fact deal with the notion of denying people access to the ballot box. I agree that everybody, once they in fact—anyway, my time’s up. I’m sorry.

AMY GOODMAN: But that’s not what Biden said in 1975, telling a Delaware newspaper, “I oppose busing. It’s an asinine concept, the utility of which has never been proven to me. I’ve gotten to the point where I think our only recourse to eliminate busing may be a constitutional amendment,” he said.

The attack from Harris came after Biden made headlines last week when he fondly reminisced about his “civil” relationships in the '70s and ’80s with segregationist Senators James Eastland of Mississippi and Herman Talmadge of Georgia. In the ’70s, then-Senator Biden was also a fierce critic of Delaware's attempts to bus students in an effort to integrate its schools. Earlier this week, we spoke with National Book Award-winning author Jonathan Kozol about Biden’s record. Kozol recently wrote a piece in The Nation, “When Joe Biden Collaborated with Segregationists.”

JONATHAN KOZOL: Joe Biden didn’t simply reach out, in consensus, some kind of civility, to these Southern racist senators. It wasn’t hard for him to reach out, because he shared their views in the first place. He didn’t just support legislation introduced by James Eastland, Jesse Helms. He thanked them for supporting his legislation and his own anti-busing legislation. He called busing “asinine.” And worse than that, at one point he even came to the point of saying—I want to get his words exact—of saying, “I’ve gotten to the point where I think our only recourse to eliminate busing is a constitutional amendment.” Just stunning words.

AMY GOODMAN: “It hasn’t been as an advocate. It’s been as an opponent” to busing Those are the words of former teacher, education activist, award-winning author Jonathan Kozol.

So, this was billed really as the Biden-Bernie debate.

AMY GOODMAN: That’s not what happened. Talk about this challenge that Senator Harris uses to take down Joe Biden.

RASHAD ROBINSON: Yeah. I mean, I think Biden, once again, is trying to run a modern campaign with an old set of tactics. It’s like putting new music on an 8-track. And it just simply doesn’t work, because we have no way to sort of fully operationalize it.

The fact of the matter is, is that the vice president went on the stage last night and argued for states’ rights. He argued for local control. Any of us who see any images, whether just in the month of February, Black History Month, of the history of black children being walked into schools with crowded white people chanting at them, it’s about the federal government having to step in to do things when the local governments wouldn’t do it. And someone running for president that is basically arguing that that is not a role for the federal government should scare all of us. No, I do think that Biden needs to explain what he actually meant, what he actually meant then and what he actually believes now.

But the big challenge that we continue to have here is the inability to apologize, whether it was Anita Hill, whether it was for sort of the remarks with segregationists, this inability to say, “I was wrong then.” You know, Bill Clinton gave him a lifeline when it comes to the crime bill. And Hillary Clinton, you know, apologized multiple times for her engagement in the crime bill back in 2016.

AMY GOODMAN: Maybe he sees that as an example of, well, she lost.

RASHAD ROBINSON: Well, she lost, exactly, but she also lost as someone who leaned on experience as her chief sort of claim to fame. And so, Biden talking about his experience since the '70s, I just think sort of—defeating a guy in the White House, a 70-year-old man who's deeply out of touch with working-class people, everyday people, and who refuses to apologize and acknowledge that he’s wrong, is not going to be beaten by putting up the left version of that. And so, I do think that, you know, there’s a lot of opportunity for Biden. But as a civil rights leader and running a next-generation civil rights organization that has 1.7 million members, we’ve reached out to meet with many of the campaigns, and we’ve met with most of the top-tier campaigns. Biden’s a campaign that we simply have not been able to hear back from.

AMY GOODMAN: Have you spoken to Kamala Harris?

RASHAD ROBINSON: Yes, we have, multiple times. And multiple times, you know, one of the things that we’ve really talked to Kamala Harris about, which didn’t come out last night, because there were no questions about mass incarceration last night—one of the things we have talked about is that we do think that she has to get very clear about her role as a prosecutor. We do think that—

AMY GOODMAN: He said, “I was a public defender, not a prosecutor.”

And the question here is, is that the country has changed from when she was a prosecutor in San Francisco. We have just seen, you know, progressive prosecutors driven by a movement of everyday people pushing in Philadelphia, Chicago, right here in New York, in Queens, all around the country people standing up and trying to change the rules of prosecution in this country. The question is, is: What has she learned? How has she changed? And as the president of the United States, what will she do to incentivize a new incentive structure for prosecutors, who have so much vast power over the criminal justice system? They decide so much. They have singular power.

And the fact of the matter is, is that, you know, unlike the president, which has to do all of these things to change things in the criminal justice, well over 80% of people in this country are incarcerated at the local level. DAs control it. Right now nearly 80% of district attorneys run unopposed. Ninety percent are white. There are 2,400 district attorneys in this country. But lots of federal funding goes into those communities. And we can incentivize or deincentivize certain behaviors. And so, I want to hear from her, as someone who was in that role, what type of things should be done to change the way that mass incarceration works in this country, and that’s got to be something that we’ve got to hear more from her.

AMY GOODMAN: And, of course, she was attorney general of California. 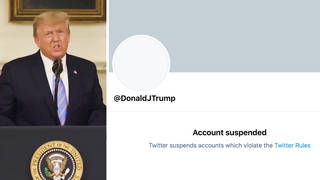