Federal prosecutors announced Tuesday they will retry humanitarian aid volunteer and immigration rights activist Scott Warren on two charges related to aiding migrants along the U.S.-Mexico border. This comes just a few weeks after a jury refused to convict Warren for providing water, food, clean clothes and beds to two undocumented migrants crossing the Sonoran Desert in southern Arizona. Eight jurors found Warren not guilty; four said he was. Federal prosecutors will make their case against Warren again in an 8-day jury trial in November. They have dropped a conspiracy charge against him. If convicted on the two felony migrant harboring charges, Warren faces up to 10 years in prison.

StoryMay 29, 2019Scott Warren Provided Food & Water to Migrants in Arizona; He Now Faces Up to 20 Years in Prison

AMY GOODMAN: I’m Amy Goodman, with Juan González. This is The War and Peace Report.

JUAN GONZÁLEZ: We turn now to Tucson, Arizona, where federal prosecutors said Tuesday they will retry humanitarian activist Scott Warren on two charges related to aiding migrants along the U.S.-Mexico border. If convicted, he faces up to 10 years in prison. This comes just a few weeks after a jury refused to convict Warren for providing water, food, clean clothes and beds to two undocumented migrants crossing the Sonoran Desert in southern Arizona. Eight jurors found Warren not guilty; four said he was. Federal prosecutors will make their case against Warren again in an eight-day jury trial in November. They’ve dropped a conspiracy charge against him.

AMY GOODMAN: Scott Warren is an activist with Ajo Samaritans and No More Deaths, which has helped refugees and migrants survive the deadly journey across the U.S. border by leaving water and food in the harsh Sonoran Desert, where the temperature often reaches three digits during the summer months. Warren responded to Tuesday’s announcement by pledging that work to assist migrant populations would continue. He was speaking outside the federal courthouse in Tucson.

SCOTT WARREN: It has been deeply exhausting and and troublesome to my friends and family and loved ones. But all of us, all of you, we’ve done our best, and we really should take a moment to celebrate that as we prepare for this future. While I do not know what the government has hoped to accomplish here, I do know what the effect of all this has been and will continue to be: a raising of public consciousness, a greater awareness of the humanitarian crisis in the borderland, more volunteers who want to stand in solidarity with migrants, local residents stiffened in their resistance to border walls and the militarization of our communities, and a flood of water into the desert at a time when it is most needed. Thank you for all of your support. And I love you all very, very much.

We go now to Tucson, Arizona, to speak with Catherine Gaffney, an activist who’s volunteered with No More Deaths for 10 years. She drops off water almost every day in the Sonoran Desert in Arizona.

Catherine, welcome back to Democracy Now! We spoke with you alongside Scott Warren right as he was about to go into this trial. Eight of the 12 jurors found him not guilty. So many people thought the government would stop. Yesterday, just as the photos from the Department of Homeland Security were released by the Office of the Inspector General within DHS, the horrific conditions in the migrant centers, we get this word that the U.S. government, the Trump administration, will retry Scott. Can you talk about the significance of this?

CATHERINE GAFFNEY: Sure. Thank you, Amy. It’s really unconscionable that the Department of Justice would continue to prosecute Dr. Warren along these charges. As you mentioned, the prosecuting attorneys, Anna Wright and Nathaniel Walters, failed to convince the jury to send Dr. Warren to prison in June. And the fact that under the direction of Trump appointee Michael Bailey, the U.S. Attorney’s Office in Arizona has decided to retry Scott, dropping the conspiracy charge but still pursuing the two counts of harboring, really shows the extreme measures that they are attempting to go to to criminalize humanitarian relief, in the context of not only really a national conversation around the humanitarian crisis on the border, and supposed government response—you know, seeking to bring humanitarian aid to the border in a moment where there’s a lot of attention being paid to these abuses and where we know that people are continuing to die crossing the desert.

JUAN GONZÁLEZ: And, Catherine, I’m wondering also, on Tuesday, if you could talk about the Amnesty International report that came out, “Saving Lives Is Not a Crime,” and talking about the politically motivated legal harassment of migrant rights defenders by the U.S.A. Here’s Americas Director Erika Guevara Rosas. She wrote, quote, “The Trump administration’s targeting of human rights defenders through discriminatory misuse of the criminal justice system sets it on a slippery slope toward authoritarianism.” Your comments?

CATHERINE GAFFNEY: That’s right. So, Amnesty has documented cases of targeted prosecution, surveillance, harassment of human rights defenders, immigrant rights advocates, really up and down the border, from California to Texas, including in the Ajo area, where Dr. Warren and his humanitarian aid groups work. And what we really see that as is an escalation of a long-standing tactic of trying to criminalize basic migration and really cause this crisis of deaths and disappearances along the border. The long-standing border strategy has been prevention through deterrence, which deliberately seeks to make the border crossing a deadly experience. And so, what we’ve seen in the last two years is really an expansion of that to become also an attack on those who would seek to respond to that crisis with humanitarian relief.

AMY GOODMAN: Catherine, the Amnesty report includes a section on Scott Warren’s case, saying, “If Dr. Warren were convicted and imprisoned on these absurd charges, Amnesty International would recognize him as a prisoner of conscience—detained for his volunteer activities motivated by humanitarian principles and his religious beliefs.” That was what Amnesty said. I want to turn to Scott Warren talking about finding the remains of migrants who have died while crossing into the United States. This is a clip from The Intercept’s mini documentary titled Let Them Have Water.

SCOTT WARREN: We went from finding human remains every other month to like finding five sets of human remains on a single trip hiking through the Growler Valley and then going back a week later and finding two more sets of remains, and then, on a single day of searching, finding like eight sets of remains and bodies of people who had died in adjacent areas of the bombing range and on Cabeza Prieta. So just this like scale of this crisis, of the humanitarian crisis and the missing persons crisis, just blew wide open.

AMY GOODMAN: So, that’s Scott Warren in The Intercept's Let Them Have Water. And I couldn't help but notice that yesterday is when the federal prosecutors came out to say that they were going to retry Scott Warren—this the time, the same time, the photos came out that are motivating people all over the country. There are protests all over the country. And this is a message from the Trump administration to say, “Don’t you dare do this,” because this guy is going to trial once again. And the fact that when Scott Warren was first arrested, it was also just hours after No More Deaths had released the video of the border agents taking water that you and others had put in the harsh Sonoran Desert, gallons and gallons of water, and dumping that water. So, back then, Scott is arrested right after the video comes out of the border agents dumping the water. Now the Office of Inspector General within the DHS releases all these horrific photos of the scandalous conditions inside the migrant jails, and the federal prosecutors come out and try to make Scott Warren the story again, say, “If you dare try to deal with this, this is what we’re going to do to you.” Catherine?

CATHERINE GAFFNEY: That’s right. And, you know, it really is no surprise or secret that Border Patrol conditions are inhumane and abusive. As early as 2011, No More Deaths put out a report, “A Culture of Cruelty,” that documented overcrowding, denial of medical treatment, denial of food and water to migrants being held in Border Patrol custody. So it’s really no surprise. And this is an agency that has shown that culture of cruelty and abusive practices, not only under the Trump administration, but really for decades now.

And, you know, Scott lives in Ajo, lives in the same desert where, actually, the day after his trial ended, Gurupreet Kaur was found, the 6-year-old girl from India, to have died from heat exposure, while her mother went out in search of water. So, he, along with not only other humanitarian aid volunteers, but border residents, are responding to a crisis in their backyards. And Scott did what anyone else would do when asked for help by two people in distress, which was he gave them food and water. He made sure they had medical care. And he didn’t ask for their documentation before doing that.

AMY GOODMAN: Catherine Gaffney, we want to thank you so much for being with us, longtime activist and volunteer with No More Deaths.

That does it for our show. I’ll be speaking July 4th in Chicago at the Hyatt Regency McCormick Place at 7:30. Check our website at democracynow.org. That’s July 4th.

Scott Warren Provided Food & Water to Migrants in Arizona; He Now Faces Up to 20 Years in Prison 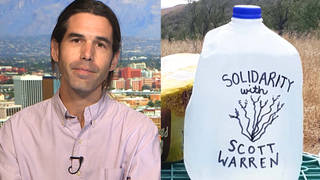 Scott Warren Provided Food & Water to Migrants in Arizona; He Now Faces Up to 20 Years in Prison