The United Nations’ top panel of climate scientists warns that humans are consuming land and water resources at an unprecedented rate, with the destructive effects of the climate crisis increasingly threatening the planet’s biodiversity and the food security of hundreds of millions of people. In its latest climate change and land special report, the Intergovernmental Panel on Climate Change warns that without dramatic action, extreme weather and rising temperatures will turn even more fertile land into desert, shrinking the global food supply, even as the world’s population rises to more than 7.5 billion people. The IPCC recommends dramatic reductions in greenhouse gas emissions, along with more efficient farming methods and a shift in diets away from dairy and meat — which produce vast amounts of methane and carbon dioxide while using large amounts of land. We speak with Pamela McElwee, an associate professor in the Department of Human Ecology at the School of Environmental and Biological Sciences at Rutgers University and co-author of the IPCC report.

AMY GOODMAN: This is Democracy Now! I’m Amy Goodman, as we turn to a new report by a top panel of United Nations climate scientists, who warn humans are consuming land and resources at an unprecedented rate, with the destructive effects of the climate crisis increasingly threatening the food security of hundreds of millions of people. In its report, the Intergovernmental Panel on Climate Change warns that without dramatic action, extreme weather and rising temperatures will turn even more fertile land into desert, shrinking the global food supply, even as the world’s population rises to more than seven-and-a-half billion people.

For more, we’re joined by one of the U.N. scientists who authored this new report. Pamela McElwee is an associate professor in the Department of Human Ecology at the School of Environmental and Biological Sciences at Rutgers University.

PAMELA McELWEE: Thank you for having me.

AMY GOODMAN: I can’t say I’m sorry your flight was canceled. You flew just from Geneva, where this report was released. You were flying through to Kansas City. But I’m glad to have you with us.

PAMELA McELWEE: Thanks so much.

AMY GOODMAN: Can you explain this new report, the major findings?

PAMELA McELWEE: So, we were asked by the Intergovernmental Panel on Climate Change to assess the impact of climate change on land, and then, conversely, what land can do to help us potentially mitigate climate change. And there were a couple of really important findings that I want to emphasize.

The first one is that we talk a lot about the potential to see a 1.5-degree Celsius temperature increase, and we want to try to avoid that because that gives us a lot of potential risks. That refers to a global average. What we’re seeing now is, we have actually already hit 1.5-degree Celsius change over land. That’s extremely concerning to many of us, because it implies the potential for a lot of risk to our food security systems, increased potential for land degradation, and a number of other effects. So that concerns us a lot. We’re already seeing that 1.5 temperature increase over land.

The other thing we looked at is whether or not land can be a potential solution to our climate crisis. We know that we have the potential to, for example, plant trees or manage our lands better, and it can help absorb some of the anthropogenic carbon emissions that we create when we burn fossil fuels. But one of the things our report points out is that planting trees is not a get-out-of-jail-free card. It is not going to make up for our failure to address the overall fossil fuel emissions that are fueling the climate crisis.

AMY GOODMAN: I want to turn right now to one of the scientists. This is IPCC Co-Chair Hans-Otto Pörtner talking about ways we can counteract some of the effects of climate change on land and food supplies.

AMY GOODMAN: And this is IPCC Co-Chair Jim Skea, who laid out the role of dietary habits on environmental degradation and how changes in consumption could curb the effects of climate change.

JIM SKEA: A move to more balanced diet could help us adapt to and limit climate change. Some diets require more land and water, and lead to higher omissions than others. For example, diets that are high in grains, nuts and vegetables have a lower carbon footprint than those that are high in meat, and they lead to better health outcomes. But, of course, dietary choices are influenced by local production practices and cultural habits.

AMY GOODMAN: Can you talk more about this, Pamela McElwee, the issue of the global diet, and especially in the United States?

PAMELA McELWEE: Well, we know that our dietary choices make a big impact. So, for example, if we talk about high-greenhouse-gas-emissions diets, those are associated with meat consumption. We know that, for example, beef and lamb tend to be higher in greenhouse gas emissions due to the way that livestock is produced. And so, when we’re talking about potentially reducing those greenhouse gas emissions, dietary change has to be on the table. So we’re talking about potentially reducing excess meat consumption, particularly in developed countries of the West. And we get co-benefits from that. We know that excess meat consumption also contributes to negative health outcomes. So, for us, it’s potentially a win-win, to address the climate crisis but also health problems.

PAMELA McELWEE: That’s right. So, right now we have about 100 million — or, 800 million people worldwide that are already food-insecure. That’s a huge number. When we add climate on top of that, we’re talking about increasing risks worldwide. So, one of the things the report points out is, we need to treat this as a very serious outcome of climate change. The disruptions to our global food supply are very significant, and we can potentially see some of them right now. This heat wave that’s been going on in Europe has affected agricultural production in France, which is a major agricultural producer. So this is not something we’re going to see in the long-term future; it’s happening right now.

AMY GOODMAN: So, it’s both meat and dairy that the report is saying we should be consuming less of.

PAMELA McELWEE: Well, the report doesn’t say that we should consume less. Our job is to say what are the potential outcomes of excess meat consumption. And it’s up to individuals, and it’s up to governments, to make those decisions about how we might potentially make those dietary changes.

AMY GOODMAN: And the report, for the first time, the majority of scientists were from the developing world.

PAMELA McELWEE: That’s right, yeah. There were more than a hundred scientists that worked on this report. And the way the IPCC works is, we volunteer our time. So we do this in addition to our day job. And so, over the course of the last two years, this group of more than a hundred scientists got together regularly and assessed the state of science. And it was tremendously useful and helpful to get to work with our developing country colleagues on this.

PAMELA McELWEE: So, greenhouse gas emissions are the main driver of overall climate change. And so, what this report looked at is, to what degree does agricultural and land use contribute to our overall climate crisis. And that’s about 25% of our human-caused greenhouse gas emissions. The other 75% is fossil fuel burning. So, clearly, we have to tackle both. We can’t just do fossil fuel. We can’t just do land. We have to tackle this together.

AMY GOODMAN: Well, I want to thank you very much for being with us, Pamela McElwee, associate professor in the Department of Human Ecology at the School of Environmental and Biological Sciences at Rutgers University, one of the authors of a major new U.N. report released by the Nobel Prize-winning Intergovernmental Panel on Climate Change, laying out their findings this week on the effects of human activity and the climate crisis on the global food supply and land degradation. She is author of the book Forests Are Gold: Trees, People, and Environmental Rule in Vietnam.

This is Democracy Now! When we come back, Monsanto targeting environmental journalists and activists, musicians like Neil Young? Stay with us. 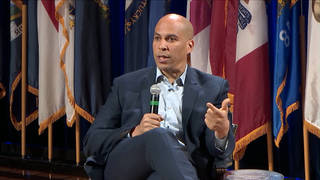