Zimbabwe’s first post-independence leader, Robert Mugabe, has died at the age of 95. In 1963, he helped found the Zimbabwe African National Union in an effort to liberate the country from decades of white-minority rule. He was jailed from 1963 to 1974. Once freed, Mugabe became a leader of the liberation movement which successfully led to the formation of an independent Zimbabwe in 1979. He became Zimbabwe’s first prime minister in 1980, but he would continue ruling the country for the next 37 years. While Mugabe has been hailed as one of the most significant anti-colonial leaders of the 20th century, he was widely criticized for how he led Zimbabwe and for his refusal to hand over power until he was ousted in a coup in 2017. His death was announced by his successor, President Emmerson Mnangagwa. To talk more about the legacy of Robert Mugabe, we speak with Horace Campbell, professor of African American studies and political science at Syracuse University.

AMY GOODMAN: This is Democracy Now!, democracynow.org, The War and Peace Report. I’m Amy Goodman, as we turn now to the latest news out of Zimbabwe. Zimbabwe’s first post-independence leader, Robert Mugabe, has died at the age of 95. In 1963, he helped found the Zimbabwe African National Union in an effort to liberate Zimbabwe from decades of white-minority rule. He was jailed from 1963 to 1974, when Zimbabwe was Rhodesia. Once freed, Mugabe became a leader of the liberation movement which successfully led to the formation of an independent Zimbabwe in 1979. He became Zimbabwe’s first prime minister in 1980 but would continue ruling Zimbabwe for the next almost 40 years.

His death was announced by his successor, President Emmerson Mnangagwa, who wrote on Twitter, “It is with the utmost sadness that I announce the passing on of Zimbabwe’s founding father and former President, Cde Robert Mugabe. Cde Mugabe was an icon of liberation, a pan-Africanist who dedicated his life to the emancipation and empowerment of his people. His contribution to the history of our nation and continent will never be forgotten,” he said.

While Mugabe has been hailed as one of the most significant anti-colonial leaders of the 20th century, he’s been widely criticized for how he led Zimbabwe, and his refusal to hand over power until he was ousted in a coup in 2017. Human rights groups long criticized Mugabe’s human rights record. Earnest Mudzengi, a political analyst in Harare, told Al Jazeera, quote, “Young Zimbabweans will remember him as a tyrant who squandered their futures and destroyed their countries. Many older Zimbabweans will look back in history and will remember him as a revolutionary fighter,” unquote. Under Mugabe, Zimbabwe’s economy also collapsed. At one point, unemployment topped 80%. Its currency became essentially worthless. In 2009, Mugabe accused Western nations of conspiring to ruin Zimbabwe’s economy.

PRESIDENT ROBERT MUGABE: The Western countries, in particular the United States and the European Union, who imposed illegal sanctions against Zimbabwe, have, to our surprise, and that of SADC and the rest of Africa, refused to remove those sanctions. If they will not assist the inclusive government in rehabilitating our economy, could they please, please stop their filthy, clandestine, divisive antics?

AMY GOODMAN: That was Zimbabwean President Robert Mugabe speaking at the U.N. 10 years ago, in 2009.

To talk more about the life and legacy of Robert Mugabe, we’re joined by Horace Campbell, professor of African American studies and political science at Syracuse University, has written extensively on African politics. His books include Reclaiming Zimbabwe: The Exhaustion of the Patriarchal Model of Liberation.

Professor Horace Campbell, your response to the news early this morning that the president, the former president of Zimbabwe, Robert Mugabe, had died? His significance, his record?

HORACE CAMPBELL: Yes, good morning. And before we speak about Zimbabwe, I would like to join with you and all the listeners of Democracy Now! to express our solidarity with the people of the Bahamas and the privation that they’re going through as a result of this hurricane and the devastation of global warming. And we also want to extend our solidarity with the people of Zimbabwe, who have lost a leader who was part of the liberation struggle.

Robert Mugabe joined the liberation struggles of the peoples of southern Africa at a decisive moment, when the peoples of Africa were fighting against apartheid, colonialism and white supremacy. But after being in power for 20 years, the situation in Zimbabwe deteriorated, and the Mugabe political leadership joined a class of exploiters that turned against the Zimbabwe working peoples. So while we mourn the loss of Mugabe, who served in the ranks of the liberation movement of Africa, his record, in the end, was one where he turned against the very people he was supposed to be part of in their struggle for social and economic transformation in Africa.

AMY GOODMAN: So, talk about him as an anti-colonialist, independence leader taking over the white-minority rule in Rhodesia, and then talk about how things changed as he became president, and when they changed, how he held onto power for 37 years, Professor Campbell.

What is important was that the struggles for independence became so intense that the South African apartheid regime, along with the West, organized to bomb Mozambique, where the Zimbabwean guerrillas were fighting from. And something that is not usually known is that the West carried out biological warfare against the Zimbabwean people by unleashing anthrax against the Zimbabwean people when they were fighting against colonial rule. The colonial leader of Zimbabwe was a man called — white — Ian Smith, who had vowed that black people would not rule Zimbabwe until 2020.

The Zimbabwean independence struggle was one that brought oppressed peoples from all over the world to support them, whether it was in the rest of Africa in the form of the Frontline States of Africa, whether it was in the global pan-African movement, and in the Rastafari movement. Bob Marley and the Wailers went to Zimbabwe in 1980 as part of the global expression of support for the Zimbabwean liberation struggles. And Bob Marley was insightful enough to say at the time of the Zimbabwean independence, “Soon we will find out who are the real revolutionaries.” That was a very important statement in the song that was sung by Bob Marley, said, “Africans will liberate Zimbabwe.” He did not sing, “Mugabe will liberate Zimbabwe,” because Mugabe himself, later on, turned around and said the Rastafari were dirty because they wore long hair.

So, the point that must be underlined, that Mugabe’s importance came at the moment in the history of Africa when he was part of the liberation struggles of Africa. But as an individual, he had learned a lot from Kwame Nkrumah, from the struggles in southern Africa, from Julius Nyerere. But while in political power in Zimbabwe, slowly he was aligning himself with a new class of Africans in Zimbabwe who wanted to accumulate wealth.

And so, in the first 10 years of independence, there were major strides in relationship to expanding opportunities for education, so that even today, 39 years after independence, the Zimbabweans are some of the most educated peoples in southern Africa. There was attempt to transform the health system in Zimbabwe, training doctors. There were attempts to better the living standards of the Zimbabwean peoples.

But by the 1990s, all of this came to naught because of the pressures of international capital in the form of economic structural adjustment programs. Economic structural adjustment program was part of the attack of international capital against African peoples in general and in the particular case of the Zimbabwean people, to increase the burdens on the working peoples, intensifying their exploitation. The response of the Robert Mugabe government at that time, instead of joining with the working peoples, was to join with a small class of Zimbabwean capitalists, who wanted to use the language of liberation to exploit the working peoples.

But the evidence of the change in Zimbabwe came very early from the position of women in Zimbabwe. The political leadership in Zimbabwe used very crude, partriarchical language in reference to women in Zimbabwe. It was even more crude in relationship to same-gender-loving persons in Zimbabwe. Robert Mugabe became internationally known for his extreme homophobia.

This was the turning point, because Mugabe could have moved with the workers and organized with the workers to turn the trade union and unorganized workers into a united force against imperialism; instead, Mugabe turned to popularizing the land invasions that were taking place by the landless people of Zimbabwe. So the landless people of Zimbabwe were always exercised about the white minority that controlled the majority of the best agricultural land in Zimbabwe. So, from —

AMY GOODMAN: Professor Campbell, we only have a minute, so how would you summarize his legacy and this last years until he was really, essentially, taken out as president in a coup?

AMY GOODMAN: Well, Horace Campbell, we want to thank you very much for being with us, professor of African American studies and political science at Syracuse University, written extensively on African politics. His books include Reclaiming Zimbabwe: The Exhaustion of the Patriarchal Model of Liberation.

When we come back, we’ll speak with longtime grassroots organizer Lisa Fithian, author of a new book. It’s called Shut It Down. Stay with us.

Shut It Down: Veteran Organizer Lisa Fithian Offers a Guide to Resistance in Era of Climate Crisis

NEXTShut It Down: Veteran Organizer Lisa Fithian Offers a Guide to Resistance in Era of Climate Crisis 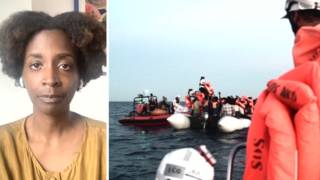