The FBI is investigating the shooting of an undocumented immigrant by an Immigration and Customs Enforcement agent during a traffic stop last week. The shooting occurred Thursday at a supermarket parking lot in Antioch, a suburb of Nashville, where workers often gather to be picked up for a day’s work. ICE agents were attempting to detain an unnamed 39-year-old Mexican man, who reportedly attempted to flee in a white box truck, when one of the agents shot him twice. It has now been revealed that the ICE agent involved in the shooting is one of the officers who made headlines in July after community members blocked attempts to detain an undocumented man in Hermitage, Tennessee. We speak with Brenda Pérez, member of The MIX, a Nashville-based community organizing and immigrant rights group.

AMY GOODMAN: This is Democracy Now! I’m Amy Goodman, as we turn to Tennessee, where the FBI is investigating the shooting of an undocumented immigrant by an ICE agent — that’s an Immigration and Customs Enforcement agent — during a traffic stop last week. The shooting occurred Thursday at a supermarket parking lot in Antioch, a suburb of Nashville, where workers often gather to be picked up for a day’s work. ICE agents were attempting to detain an unnamed 39-year-old Mexican man, who reportedly attempted to flee in a white box truck, when one of the agents shot him twice. A local news channel has released a surveillance video of the incident showing the white truck driving away from the scene and one agent raising his firearm and pointing at the truck. The injured man did manage to flee the scene but later surrendered to FBI and was treated and released from a local hospital. He has not been arrested or charged with a crime.

It has now been revealed the ICE agent involved in the shooting is one of the officers who made headlines in July after community members blocked attempts to detain another undocumented man in Hermitage, Tennessee. ICE agents tried to intercept the man, who had been living in the community for 14 years, as he left his home with his son, by blocking him into the driveway. But community members formed a human chain so that the father and son could exit the van and re-enter their home, stopping the agents.

Hernan Crescencio, a member of Nashville-based immigrant rights group The MIX, said in a statement, quote, “In light of what happened this morning, it is clear that Immigration and Customs Enforcement officials are aware and frustrated that community members understand how to exercise their rights. Now, ICE agents are taking out their frustrations on our neighbors by escalating civil matters into use of lethal force,” they said.

For more, we go to Brenda Pérez, member of The MIX, a Nashville-based community organizing and immigrant rights group.

Welcome to Democracy Now! Please explain what happened last Thursday. This all started in a parking lot where workers gather for a day’s work?

BRENDA PÉREZ: Yes. And thank you so much for having us on.

So, this happened on Thursday morning around 7 a.m. So, it’s a very busy intersection. You see school buses driving on that road. People are gathering to get ready for work, to do ride-sharing in like a very informal situation. When ICE agents approached three men in a vehicle, two of the men provided the IDs, and the third man, who was shot at, did not provide his identification. He knew he didn’t have to. The ICE agents were not presenting the correct paperwork. They were not presenting a warrant.

And at some point, the gentleman who was shot at was like moved into a box truck, and he decided to drive off. I think it’s a very intense situation, and we don’t know how we will react in this manner. So, he decided to drive off. And when he drove off, the agent — in the video, you can see that he was like alongside the truck, kind of followed the truck and then extended his arm and shot at the truck. So, there was — so he was injured. The man was injured. He had a bullet wound in the stomach and in his elbow. And he drove off, took refuge somewhere. We didn’t know where he was. There was a lot of concern in the community for his safety and his health.

Later on, through the support of his attorney and through conversations with the FBI, we were able to negotiate him surrendering himself at the local hospital and receive treatment. He received like a surgery that evening, and he was able to communicate with his children and his family. And he has not been placed under arrest, and he’s not under anybody’s custody right now.

BRENDA PÉREZ: The ICE agent was not arrested, that we know of.

AMY GOODMAN: So, explain who the ICE agent is, who opened fire on this truck. And explain what local Nashville police are doing. Are they cooperating with the ICE agents?

What we’re seeing is basically an agent and a whole organization that feels no accountability to the community and no accountability to public safety. I mean, when he fired those shots, that road, Richards Road, is a very busy intersection, filled with a lot of immigrant communities headed to school, headed to work, headed to whatever their lives lead them to. And he fired those shots. You know, we saw a lot of comments on social media about parents whose children heard the gunshots, who were there, taken to school and had to process this kind of on their own. And as the story developed, like, the teachers were informed. We heard Tennessee Immigrant [& Refugee Rights] Coalition put out a statement saying that the teachers — some teachers rode back with their kids on the school buses, because there was such a concern and fear in the community, because children didn’t know what they were coming back to. And it’s all because of this one ICE agent who has no accountability to anybody.

AMY GOODMAN: Can you talk about the fact that Nashville is home to the Davidson County jail, a CoreCivic facility, that’s one of the biggest ICE detention jails in Tennessee? Does this jail play a role in what’s going on here?

BRENDA PÉREZ: Yeah. And not only are we home to a CoreCivic facility in our Davidson County jail, we are also home to a CoreCivic headquarters, and they are headquartered here, as well. As we know, like, Sheriff’s Department didn’t have anything to do with this incident; however, on a daily basis, anybody who’s arrested in Nashville is held at the Davidson County Sheriff’s Department jail. So, Metro Police does not have a jail; it’s all run through the Sheriff’s Department. The Sheriff’s Department, under the jurisdiction of Sheriff Daron Hall, has had a contract with ICE, where people — immigration status is constantly being checked and people are being deported out of our county jail. So, although we can have these local politicians saying that we are a welcoming city, that we want to be pro-immigrant, as long as we continue to have that contract in our county jail, we are not, and we will have a deportation pipeline out of our city — and we continue to have a deportation pipeline out of our city.

AMY GOODMAN: Finally, we’re talking to you in this week of the mayoral runoff, so things are also very much coming to a boiling point on these issues, certainly being discussed in the media. You have the Nashville mayor’s runoff election taking place on Thursday. Mayor David Briley has said the shooting is “exactly what we don’t want happening in our city.” Your thoughts on his record on immigration, as well as his opponent, Councilman John Cooper?

BRENDA PÉREZ: Yeah, absolutely. I think Mayor David Briley recently put out a statement that the local government is going to challenge the H.B. 2315, which is a law that took effect this year, which allows all kind of state government employees and state law enforcement employees to act as immigration agents, and it authorizes them to question people on their immigration status. It extends so far as to allowing the school resource officers to ask about immigration status. So it put a lot of fear in the community. I think that was a good step on his behalf to make this announcement. It could have been sooner. It could have obviously been sooner. I read the other candidate’s, like, statement about what happened on Thursday, and basically he was just saying, “We’re here for investigation.”

I think both of the mayors can say wonderful things about being pro-immigrant and being on our side of the story. But until somebody steps out and says that they’re willing to challenge the government contract and the ICE contract at the Davidson County jail, we’re not going to have any changes in our city. We have these agents that are rogue, and they have no accountability to anybody out there, and we have this deportation pipeline coming out of our jail. So, until one of these mayor candidates can actually make a statement against that, then we really know what’s happening.

AMY GOODMAN: Brenda Pérez, I want to thank you for being with us, member of The MIX, a Nashville-based immigrants’ rights group in Tennessee.

NEXTHurricane Dorian Was Fueled by Climate Change. Why Isn’t the Mainstream Media Making the Connection? 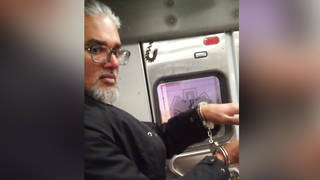