At least 44 people are dead, and the number is expected to rise dramatically, as the Bahamas continues to reel from the devastation wrought by Hurricane Dorian last week. More than 70,000 on Grand Bahama and the Abaco Islands have been left homeless, and hundreds, perhaps thousands, remain missing. As the Bahamas faces unprecedented destruction and thousands continue to seek shelter and aid, the island nation has been described as “ground zero” for the climate crisis. Despite this, the mainstream media has largely omitted any mention of global warming in its coverage of the disaster. We speak to Allison Fisher, outreach director of Public Citizen’s Climate and Energy Program. She says, “If you are an American that is turning to one of these sources, whether it be ABC or NBC or your major paper in your state, for information, you are not hearing what the scientific community wants you to know, which is the climate crisis is making these storms much more dangerous and, in some cases, deadly.”

AMY GOODMAN: We end today’s show with Hurricane Dorian. At least 44 people dead, the number is expected to soar dramatically as the Bahamas continues to reel from the devastation wrought by Hurricane Dorian last week. More than 70,000 on Grand Bahama and the Abaco Islands have been left homeless. Hundreds, possibly thousands, remain missing.

As the Bahamas faces this unprecedented destruction, the island nation archipelago has been described as “ground zero” for the climate crisis. Despite this, the mainstream media has largely omitted any mention of global warming in its coverage of the disaster. A study by Public Citizen found the country’s leading print publications devoted 363 articles to Dorian, but only nine mentioned climate change. Another study, by Media Matters, in the first week after Dorian hit, from August 28th to September 5th, found that of the 216 segments aired on the main television networks on Dorian, only one mentioned climate change.

For more, we go to Washington, D.C., to speak with Allison Fisher, outreach director of Public Citizen’s Climate and Energy Program.

Allison, thanks so much for being with us.

AMY GOODMAN: You have the broadcast networks — you know, ABC, NBC, CBS — and you have the cable networks — you know, not only talking about Fox, but talking about CNN and MSNBC, as well — nonstop coverage, the lead-up to Dorian and, of course, the crisis of what happened in the Bahamas, but almost never a mention of climate change. Talk about this.

ALLISON FISHER: Yeah, that’s right. So, we actually looked at four days of coverage, and that included the lead-up to the storm making landfall in the Bahamas. And what we found was the major TV news programs and the major papers across the country, with few exception, connected the intensity of the storm with our increasingly warming climate. So, specifically, just to give you some of those numbers to see how few we’re talking about, just 7% of the TV networks made the link between climate change and this particular hurricane, and even less in the newspapers. Just eight of the papers that covered — that did Dorian coverage made that link. So, you know, if you are an American that is turning to one of these sources, whether it be ABC or NBC or your major paper in your state, for information, you are not hearing what the scientific community wants you to know, which is the climate crisis is making these storms much, much more dangerous and, in some cases, deadly.

And, Amy, unfortunately, this is not an isolated incident. We can very easily substitute Dorian for Hurricane Michael or Harvey or Florence, or even unprecedented wildfires, 500-year storms, record-breaking heat waves, and we would be having the same conversation and making the same critique, which is, when climate-fueled extreme weather events happen, by and large, the media is not talking about climate. And it’s precisely the moment when they should be.

AMY GOODMAN: How often do they have climate scientists on, Allison?

ALLISON FISHER: Very rarely. We looked at — we’ve looked at all of the extreme events that have happened in the last couple years, and very rarely are they bringing people into the studio to communicate the science. And this is very problematic. Actually, the papers are doing a little bit better with quoting the most up-to-date science and scientists, but the TV networks are not bringing in communicators. And what’s very problematic, and possibly the reason why they’re not making the connection, is because they’re not familiar with the science. So you have — you know, you have them shy about making the connection, hesitant to make the connection, and then failing to bring in people that can actually communicate, and have the credibility to talk to the American people about this issue. So, it’s a problem all the way around.

AMY GOODMAN: Interestingly, Chad Myers, the CNN meteorologist, who, if people watch CNN, they see him on all the time, and of course the meteorologists are constantly on during this storm coverage — he just recently wrote a piece, “I am a CNN meteorologist. I used to be a climate crisis skeptic.” And he talked about how he’s transforming, although it’s not reflected as much, I must say, on the network, which — I mean, the meteorologists in Europe, when we cover the U.N. climate summit, there are groups of meteorologists who are demanding that their fellow and sister meteorologists start raising the issue of climate crisis, that they do in the coverage. You had Heidi Cullen, who was at the Weather Channel, who, when she raised this issue, was basically forced out.

ALLISON FISHER: Yeah, there’s been a number of — a number of reports that have come out about the relationship between the American people and their meteorologist, the person that tells them about the weather. And they’re one of the most trusted sources on TV. And so, it’s extremely important that they’re the ones that are communicating the dangers of climate change and giving context to these extreme weather events, to let people know that that’s exactly what we’re experiencing. There is certainly some fear out there that having this conversation, and the meteorologists having this conversation with their audiences, is polarizing and can be seen as politicizing the issue. And it’s really not. It’s really the exact moment to not be talking about the politics, but be talking about the science and normalize that and have that be a bigger part of the conversation.

AMY GOODMAN: Can you talk specifically about how President Trump denying climate change has had an effect on media coverage, even though you have the networks, outside of the network that he considers his home, Fox, though he’s been critical of it lately — CNN, MSNBC, critical of him in so many other ways again, again, rarely raising the issue of the climate crisis in their regular meteorological coverage, weather coverage?

ALLISON FISHER: Yeah. By and large, the media is not holding President Trump accountable for his climate denial or for his inaction, for that matter. Mostly what happens is, when he makes a comment about these events, the story becomes about him, and it becomes about the thing that he said. And again, it deflects away from the conversation that the media, whether it be the network news or the local papers or the bigger papers, should be having.

AMY GOODMAN: They spend much more time talking about his magic marker and falsely saying Alabama would be hit than about the critical issue of climate crisis. Allison Fisher of Public Citizen, thanks so much. I’m Amy Goodman. Thanks for joining us. 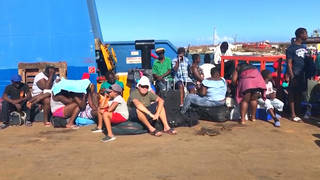