“Let the People Pick the President”: The Case for Abolishing the Electoral College

As Donald Trump and Joe Biden make their final campaign pushes in battleground states that could decide the election, we speak with author and journalist Jesse Wegmen about the case for abolishing the Electoral College system altogether and moving toward a national popular vote for electing the president. Two of the last three presidents — George W. Bush and Donald Trump — came to office after losing the popular vote. “The framers who met at the Constitutional Convention really had no idea what they were doing when they established how to pick a president,” says Wegman, New York Times editorial board member and author of “Let the People Pick the President.”

As the presidential candidates make their final campaign push ahead of Election Day by visiting key battleground states like Florida and North Carolina, we turn now to look at the case for abolishing the Electoral College.

Two of the last three presidencies, Donald Trump’s included, have gone to the candidate who lost the popular vote. In 2000, the Supreme Court halted the Florida recount, handing the election to George W. Bush. It was later determined Vice President Al Gore actually won the election by half a million votes. In 2016, Hillary Clinton received almost 3 million more votes than Trump, but Trump still won.

The Electoral College, enshrined in the U.S. Constitution by the wealthy white Founders, many of whom were slaveholders, has allowed these victories, where the loser wins. But a mass movement is building to elect the president through a national popular vote.

For more on this effort, we’re joined by journalist Jesse Wegman, member of The New York Times editorial board, author of Let the People Pick the President: The Case for Abolishing the Electoral College.

So, Jesse Wegman, welcome to back to Democracy Now! Please explain. Explain the roots of the Electoral College and what this movement is all about.

JESSE WEGMAN: Sure. Well, you know, the framers who met at the Constitutional Convention really had no idea what they were doing when they established how to pick a president. They said themselves that it was the hardest issue they had to decide. They fought about it the entire summer of 1787. And at the very end, they basically threw together this jerry-rigged system that we now call the Electoral College in a side room of the convention hall, really just to get the thing done and get it sent out to the states for ratification. They didn’t really care too much about how it operated, because they knew George Washington was going to be the first president, so the stakes just didn’t seem that high to them.

But nevertheless, the system that they thought they were designing basically fell apart within the first 10 years. You know, the model we think we know is that there’s this body of deliberate, thoughtful, educated, wise men who will make the choice for the people about who should lead the country. But within 10 years, it had completely stopped being like that, with the rise of national political parties. It became a team sport, and that’s what it remains today.

AMY GOODMAN: Talk about the role of slavery in the establishment of the Electoral College.

JESSE WEGMAN: Sure. I mean, slavery is obviously at the heart of every compromise that is struck at that Constitutional Convention. The one we know, the most familiar — that’s most familiar to us is the three-fifths compromise, and that was the deal by which the Southern slaveholding states got to count three-fifths of their slaves toward their representation in Congress, so that equals roughly 12 to 14 extra representatives in Congress over the first decades of the country’s life. And because of the way the Electoral College is designed, that translates into 12 to 14 extra electoral votes. The South actually won the White House, held onto the speaker of the House, won many Supreme Court seats, because of that extra power. It was called the “slave power” at the time, and it ran all the way up through the Civil War. And so, that’s — really, slavery was clearly at the heart of the compromise, and it’s certainly that the Electoral College benefited the slave states well into the 19th century.

AMY GOODMAN: So, you have long been a proponent of abolishing the Electoral College. Talk about how it is that, you know, losers win — for example, George W. Bush in 2000. And it is important to note that four of the people involved in that legal battle — now Amy Coney Barrett, John Roberts —

AMY GOODMAN: — Brett Kavanaugh and the Supreme Court justice who was justice at the time, Clarence Thomas, were all involved with this — of course, Thomas ruling on behalf of Bush.

AMY GOODMAN: But how it is now that the Electoral College gathers — talk about where that actually happens —

AMY GOODMAN: — and who the electors are, and what is the movement that is challenging this?

JESSE WEGMAN: So, electors are just average people like you and me. They are not deliberative, wise men. They just happen to be people who know somebody who picks electors. Each candidate has their own slate of electors. Each state gets a number of electors equal to its representation in Congress, so its members of the House plus its two senators. That’s it. That’s really most of what the Constitution says about the Electoral College.

The thing that gives us popular vote losers as presidents, that’s something that actually has nothing to do with the Constitution. It is state laws that are called winner-take-all laws. And these are laws that do exactly what they sound like, which is they take those electors and they award all of them to the winner of the state’s popular vote. Whoever wins the state’s popular vote wins all of that state’s electors. So, in California, four-and-a-half million people voted for Donald Trump in 2016. That’s a lot of people. That’s more than most states in the country. And yet they all were essentially invisible when it came time to cast the state’s electoral votes, because California, like all but two states in the country, uses winner take all.

This affects everyone, and it harms everyone. Yes, it’s hurt Democrats and helped Republicans twice in the last 20 years, so it seems like a partisan issue, but in fact it’s not. It harms everybody, no matter their political affiliation, all over the country. So, that’s why we get to this popular vote compact, which is the latest way that has been come up with to get us to a popular vote.

JESSE WEGMAN: Right. So, there’s been 800 or so attempts throughout American history to amend or just abolish the college outright. They’ve all failed, with the exception of one, the 12th Amendment, which made some important adjustments to it. But, obviously, an amendment is not the path we’re going to take today.

So, about 15 years ago, a computer scientist in Northern California developed an idea where he realized that it was the winner-take-all laws, those state laws that I just was talking about, that were the heart of the problem. So, he said, “Well, states have total authority to decide how to award their electors. They don’t have to do it by state winner take all. What if states, representing a majority of electoral votes, all gave their electors instead to the candidate who won the most votes everywhere in the country?” And bingo, you have a national popular vote for president.

So, this is an interstate compact, which is basically just an agreement among states. There are many of them in existence right now all over the country for different — on different issues. This is an agreement among states to award all of their electors not to their statewide winner but to the winner of the most votes in the whole country. And when states representing a majority, 270 electoral votes, which is what you need to win, join this agreement, it takes effect, and we elect a president by a popular vote without actually technically abolishing the Electoral College. It’s actually using the Electoral College as the framers designed it. So, 15 states right now have joined this agreement, plus D.C., and together those states represent 196 electoral votes. You know, you’ve got to get to 270. So, subtract it, do the math, and you get 74 more electoral votes to go, and the agreement takes effect.

AMY GOODMAN: And talk about the states that are now considering this, like Colorado.

JESSE WEGMAN: Right. Well, Colorado is one of the latest to become a member state. And Colorado is an interesting state, for many reasons. One is, all of the other states to date have been states with solid Democratic leadership when they adopted the compact. They were what we would call blue states, right? But Colorado was the first state that was even close to being a purple state, a swing state, when it adopted the compact. So, it was sort of evidence that actually this idea could appeal across partisan lines.

Unfortunately, in Colorado, on the ballot this coming Tuesday is a proposition, Proposition 113, which is a citizen-led ballot initiative that is challenging Colorado’s joining this compact, and asking voters to reject it. It was started by conservative activists to oppose any change to the way Colorado awards its electoral votes. And, you know, it’s going to be a close fight. I know that the polling has it pretty close right now.

AMY GOODMAN: And other states, as we wrap up?

AMY GOODMAN: Other key states, as we wrap up?

JESSE WEGMAN: Right now Virginia is close to passing the compact. They’ve already passed it, and they just need to do it again and get it signed by the governor. And I think then we look at some other big states, maybe even Texas. If Republicans realize they’re going to lose Texas in the Electoral College, they have no route to the White House.

AMY GOODMAN: Finally, this interesting point from BuzzFeed News: “The Electoral College is stacked against nonwhite voters to such a degree that this year, the average white, non-Hispanic voter appears to have almost twice the power to decide the election as the average Asian American voter,” for example. Jesse, 10 seconds.

JESSE WEGMAN: That’s right. This is the essence of the way the winner-take-all rule works, and it has always worked to the benefit of white voters in America. So we need to balance it out and make everybody count the same.

AMY GOODMAN: Jesse Wegman, thanks so much for joining us, author of Let the People Pick the President: The Case for Abolishing the Electoral College.

Democracy Now! will be doing an election special on Tuesday night, November 3rd, from 9:00 Eastern time to midnight. All stations can take this special, and we’re broadcasting at democracynow.org, covering the results from the presidential election to congressional and state races, as well as ballot initiatives.

And to see the Rolling Stone interview I did with Julian Casablancas, go to democracynow.org.

I’m Amy Goodman. Thanks so much for joining us. Remember: Wear a mask, stay safe, and vote. 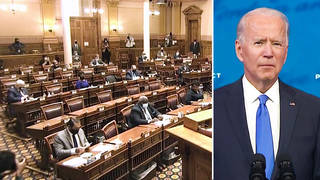