As Congress is rushing to pass a new $900 billion coronavirus aid package, Senator Bernie Sanders of Vermont is calling the new relief package “totally inadequate, given the nature of the unprecedented crisis that we face.” Sanders took to the floor of the Senate Friday to call for $1,200 emergency checks for every working-class adult and $500 per child. We air portions of his address.

AMY GOODMAN: The House could be voting as soon as today on a new $900 billion coronavirus aid package, after a deal was reached by congressional leaders Sunday. While the legislative text has not yet been released, the package is expected to include $600 relief checks for qualified adults and children and a temporary $300 increase in weekly unemployment benefits. The bill is expected to extend a CDC moratorium on evictions until January 31st.

On Friday, Senator Bernie Sanders of Vermont spoke from the floor of the Senate and decried the aid deal as, quote, “totally inadequate.” He called for $1,200 emergency checks for every working-class adult and $500 per child.

Now, we all hope and pray that the new vaccine will be distributed as quickly as possible and that it will put an end to this nightmare. But today, the truth is that millions of low-income and middle-class families are suffering in a way that they have not suffered since the Great Depression of the ’30s.

Today, the reality is that over half of our workers are living paycheck to paycheck, trying to survive on a starvation wage of 10 or 12 bucks an hour. The reality is that millions of our senior citizens are trapped in their homes, unable to see their kids or their grandchildren, unable to go to a grocery store, and many of them are trying to get by on $12,000, $14,000 a year Social Security, and scared that they may come down with the virus and die. In addition, millions more with disabilities are suffering. Further, in our country today, one out of four workers are either unemployed or make less than $20,000 a year.

Further, we have the worst eviction crisis in modern history, some 30 million families worried that because they cannot pay their rent, they may end up out on the street.

Mr. President, members of Congress should also be aware that we are far behind other major countries in terms of protecting working families during this pandemic. Not only does every other wealthy country guarantee healthcare to all people as a human right, almost all of them are providing far more generous benefits to the unemployed and the struggling in their countries than we are doing in our country.

Mr. President, several months — Madam President, sorry — Madam President, several months ago I introduced legislation, along with Senator Kamala Harris, now our vice president-elect, and Senator Markey, that would during the course of this economic crisis provide $2,000 a month — $2,000 a month — to every working-class person in this country. And frankly, that is exactly what we should be doing. But, unfortunately, given the conservative nature of the Senate, I understand that is not going to happen.

Yet, at a time of massive wealth and income inequality, as Senator Schumer just indicated, at a time when huge corporations were making record-breaking profits, the Republican leadership here in the Senate was able to provide over a trillion dollars in tax breaks to the 1% and large corporations.

So, we could do all of those things — tax breaks for billionaires, massive corporate welfare, huge military expenditures — but in the midst of the worst economic meltdown since the Great Depression, somehow Congress is unable to respond effectively to the needs of working families. …

Madam President, as a result of the pandemic, the government told restaurants and bars, retail stores, movie theaters, schools, malls, small businesses all over this country, “Shut your doors. It is too dangerous for you to be open now.” And they did that because that is what the public health experts said was the right thing to do in order to control this horrific pandemic.

But what the government has not done, Madam President, is to provide the workers who lost their jobs and lost their incomes as a result of those shutdowns with the help that they need in order to pay their bills and to survive economically.

The $600 a week in supplemental unemployment benefits that Congress passed unanimously in March expired in July — over five months ago. And during that time, the Republican Senate has done nothing to help working families pay their rent, feed their children, go to a doctor or pay for the life-saving prescription drugs they need. And the Senate has not done anywhere near enough to provide help for the struggling small businesses, in Vermont and all across this country, who are desperately trying to stay afloat.

Further, Madam President, as bad as the economy has been in general, it has been far worse for African Americans and Latinos. During the pandemic, nearly 60% of Latino families and 55% of African American families have either experienced a job loss or a cut in pay.

Madam President, for nine months, we have asked tens of millions of working people in this country to survive on one $1,200 check — with no help for healthcare, no support for hazard pay, no assistance for rent relief. Absolutely nothing.

Meanwhile, Madam President, I should mention that over this same nine-month period, 651 billionaires in the United States became over a trillion dollars richer.

A trillion dollars in increased wealth for the very richest people in our country. One $1,200 check for tens of millions of Americans desperately trying to survive. That is unconscionable. That is immoral. And that has got to change. …

Madam President, in my view, the $348 billion in new money, that is included in the proposal now being discussed, is totally inadequate, given the nature of the unprecedented crises that we face. The American people cannot wait any longer. They need economic relief right now. Their kids are going hungry. They are being evicted from their homes. They can’t go to the doctor. They need help, and they need it now. Every working-class American needs $1,200, at least, $2,400 for couples and $500 for children.

And let me be clear, to emphasize a point that Senator Schumer made. And that is, what I am talking about now is money that must not be taken from other important priorities, like 16 weeks of supplemental unemployment benefits, aid for small business, nutrition, housing, education and the other important provisions in this bill. We need adequate funding to address the unprecedented crises that we face. We should not and cannot and must not take from Peter to pay Paul. We cannot cut on unemployment benefits in order to help small business. We have got to do it all, right now.

AMY GOODMAN: Senator Bernie Sanders, speaking Friday on the floor of the Senate. He wore his mask throughout his speech.

Next up, we look at President-elect Joe Biden’s climate crisis team, which he announced Saturday. 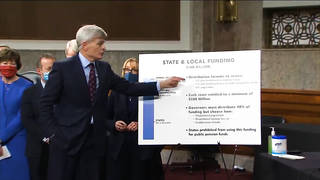