South Bend Politician: I Worked with Pete Buttigieg. He Did Not Respect Black Residents’ Struggles

2020 presidential candidate and former mayor of South Bend, Indiana, Pete Buttigieg has surprised many with his strong showings in Iowa and New Hampshire, two of the country’s whitest states. But as the race moves on to South Carolina and Nevada, Buttigieg continues to poll extremely low with African-American voters. His own former constituents are condemning his treatment of the black community in South Bend during his time as mayor, calling out systemic racism in the police force. During Buttigieg’s tenure, black residents were 4.3 times more likely to be arrested for possessing marijuana than white people. We speak with Henry Davis Jr., a South Bend city councilmember since 2008, as well as legendary feminist scholar Barbara Smith, co-founder of the Combahee River Collective.

StoryOct 26, 2022Not an Air War, a Ground War: Dems Should Redirect Election Funds to Organizing If Black Votes Matter

AMY GOODMAN: We turn now to look at other police policies in other parts of the country, to look at Pete Buttigieg’s record on policing and racial justice, following his second-place place finish in New Hampshire last night. The former mayor of South Bend, Indiana, has surprised many with his strong showings in Iowa and New Hampshire, two of the country’s whitest states. But as the race moves on now to Nevada and South Carolina, Buttigieg continues to poll extremely low with African-American voters. His own former constituents are condemning his treatment of the black community in South Bend during his time as mayor, calling out systemic racism in the police force. During Buttigieg’s tenure as mayor from 2012 to '18, black residents were 4.3 times more likely to be arrested for possessing marijuana than white people. At last week's presidential debate, ABC News moderator Linsey Davis questioned Pete Buttigieg about the rise in arrests of black people under his administration.

PETE BUTTIGIEG: Yeah. And one of the strategies that our community adopted was to target when there were cases where there was gun violence and gang violence, which was slaughtering so many in our community.

AMY GOODMAN: Well, for more, we go to Chicago, where we’re joined by Henry Davis Jr., a South Bend city councilmember since 2008.

Welcome to Democracy Now!, Henry Davis Jr. Can you talk about your experience as a city councilmember with your mayor at the time — he just recently stepped down — Pete Buttigieg, who has now just placed second in the New Hampshire primary?

HENRY DAVIS JR.: Well, thank you for having me. My time working with Mayor Buttigieg was — at best, it was contentious. It was very difficult to get across to him, and also to his administration, how African Americans were living in South Bend and some of the issues that confronted them on a daily basis. You’re talking about double-digit unemployment. You’re talking about a very high poverty rate, over 40%. You’re talking about high crime. You’re talking about schools shutting down and closing. And even some of his policies, when it came to “a thousand houses in a thousand days” program, when he decided to go through the hood or, you know, in the black and brown areas, and he wanted to demolish these homes, and the homes were demolished. But it wasn’t the fact that some of those homes didn’t need to come down; it was the fact that there was no affordable housing program that came behind it. And so, now we’re still dealing with, you know, empty lots, high weeds and a lot of varmints that are living in those empty lots. And so, when you talk about right now even with the police force, you have the lowest numbers serving of African-American officers in the police force in South Bend.

So, you know, there are a number of issues that confronted the African-American community and that he really chose not to deal with. And so, as a councilman and having a predominantly black district, a lot of those fights were held and had on the council floor, and I did as much as I could to satisfy the residents and the constituencies, but it was very hard going back and forth and not getting that money invested back in the community like it should have been. And so, here we are now, you know, dealing with a presidential idea of a Pete Buttigieg, and even back in South Bend, how do we correct some of these social ills in its environment.

AMY GOODMAN: I wanted to say, the whole country learned about the murder of Eric Logan, a black South Bend resident who was shot and killed by a white police officer, Ryan O’Neill, because, of course, at the time, Mayor Pete Buttigieg was running for president. Can you talk about how he handled that, and also about the firing of the first black police chief, Darryl Boykins?

HENRY DAVIS JR.: Well, just like I was just talking about, he didn’t handle it. And if he did handle it, it was a fumble. Eric Logan was a culmination of events that took place since he took office back in 2012. Right after he took office, there was a young man by the name of Michael Anderson that ended up dying under suspicious circumstances with the South Bend Police Department. There was another young man named DeShawn Franklin, who happened to be asleep in his home, and he was attacked and brutally beaten up by South Bend police. And, you know, none of those officers were even disciplined. Then you had Eric Logan. And a lot of things happened in between there, as well, but then you have Eric Logan, who died at the end of a gun. And so, you know, it just has not been a good ride. South Bend needs a do-over.

And this is like, you know, the thing that has happened right now with the Democratic Party as a whole. You know, blacks, African Americans, is the backbone of the Democratic Party. And we desire good schools. We desire safe neighborhoods. We desire good jobs. We desire the same thing that most people desire and need and want to live in America. And if we are planning on beating a Donald Trump this coming November, we have to have an organized and unified attack that’s going to make sure that there’s a candidate out in front that’s going to be interested in making sure that we not only vote, but those things that we’re voting for are going to happen. And right now you have a slew, a slate of candidates. They’re everywhere. They’re not talking about the hardcore issues that you would talk about at your kitchen table, at your local diner or even at church. They’re not talking about those things. They’re talking about just like a lot of different wild ideas on how this is supposed to work. This is not a student council race. This is for the presidency of the United States of America. This is the ruler of the free world. And African Americans are Americans, and we desire to have our priorities as a part of someone’s platform.

AMY GOODMAN: I wanted to bring Barbara Smith, the feminist scholar, back into this conversation. And as you’re listening to these two examples, looking at Bloomberg, looking at Buttigieg, your thoughts?

BARBARA SMITH: [inaudible] high, aren’t they? I think that they always say this is the most important election of our lifetime, but given what’s in the White House at this point, and given what’s going on in our nation, we really have to be very, very alert, and we really need to look at the candidates and figure out which one of them is capable. And obviously the things that were just discussed about two of the candidates, as far as I’m concerned, that makes them unelectable, because a racist — another racist in the White House, that’s just like a little too much to bear. I think that we do have a candidate who deals with bread-and-butter issues, and that’s why I’m supporting Bernie Sanders.

AMY GOODMAN: Henry Davis Jr., if you could talk about — I mean, the population of South Bend is something like — it’s more than a quarter African-American. In the last minute that we have, have you been surprised at the rise of your former mayor, of Pete Buttigieg, from South Bend mayor, and all the controversies that were there at the time, to now being one of the front-runners for president in the United States?

HENRY DAVIS JR.: I’m absolutely surprised by the rise. There’s an expectation of presidential, but there’s also something that needs to go behind that in substance to support him. That means a résumé and some real-life things that have occurred. Biden took a text out on Mayor Pete recently, this past week, and talked about his lack of experience. And although those things probably were pretty hardcore, the truth is, is that we expect that we’re going to have a president that has some support from the rest of the U.S. Senate and some support from the rest of the U.S. Congress, but not only that, but have some real-life experience at trying to be or being a president or being something that is more than a mayor. And so, we desire somebody there that is going to be able to, day one, take over the reins and try to correct some of the things that Donald Trump has stepped on and hurt us with. So, yes, I —

AMY GOODMAN: We’re going to have to leave it there. Henry Davis Jr., thank you so much, as well as Barbara Smith. I’m Amy Goodman. Thanks so much for joining us.

Not an Air War, a Ground War: Dems Should Redirect Election Funds to Organizing If Black Votes Matter 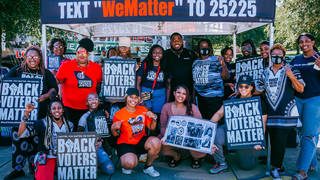 Not an Air War, a Ground War: Dems Should Redirect Election Funds to Organizing If Black Votes Matter