“Terrified to Go to Work”: Hundreds of Workers in Meat & Poultry Plants Test Positive for COVID-19

We look at the spike in coronavirus infections at meatpacking plants. In just one case, Smithfield Foods shut down a plant responsible for 5% of U.S. pork production after more than 350 workers at the facility tested positive for COVID-19. Meanwhile, deaths of slaughterhouse workers have been reported in Pennsylvania, Georgia and Colorado. Many meat processing facilities employ large numbers of immigrants, including undocumented workers. We speak with Wenonah Hauter, executive director and founder of Food & Water Watch, and with Magaly Licolli, executive director of Venceremos, an advocacy group for poultry plant workers, based in Springdale, Arkansas, home to Tyson Foods headquarters.

AMY GOODMAN: This is Democracy Now! The Quarantine Report. I’m Amy Goodman, with Juan González, as we turn to look at the spike in infections of COVID-19 at meatpacking plants. This week, the world’s biggest pork producer, Smithfield Foods, shut down its processing plant in Sioux Falls, South Dakota, that’s responsible for close to 5% of U.S. pork production, after more than 350 workers at the plant tested positive for COVID-19. That’s accounting for nearly half of South Dakota’s reported infections. In Pennsylvania, 130 workers tested positive at a Cargill Meat Solutions plant, and a union steward at the JBS Beef slaughterhouse died last Friday of a coronavirus infection. Deaths of slaughterhouse workers have also been reported in Georgia and Colorado. Many meat processing facilities employ large numbers of immigrants, including undocumented workers.

In a few minutes, we’ll speak with an advocate for poultry plant workers, but we’re beginning with Wenonah Hauter, executive director and founder of Food & Water Watch, author of Foodopoly: The Battle Over the Future of Food and Farming in America.

Welcome back to Democracy Now!, Wenonah. If you can talk about the significance of what’s happening, this pandemic exposing the fissures of society, the massive problems we have already, but the idea that in one plant, which they’ve now been forced to shut down, about 350 workers have tested positive? Now, this is in South Dakota, where the governor, Noem, who is a Republican governor, has refused to impose a shelter-at-home order. But can you talk about the significance of this?

WENONAH HAUTER: Yes. Well, this is more evidence that the meat industry is not concerned about public health, not concerned about workers, but just worried about their bottom line. These plants should have been cleaned. Some of them should have been closed down. Let’s look at the one in Sioux Falls. That plant is primarily a facility that produces pork for export. There was no reason that this plant had to remain open. It’s impossible to do social distancing in a meat plant like this, where workers have to be shoulder to shoulder cutting up carcasses.

And what we’ve seen is that the meat industry has just taken this opportunity to lobby their allies in the Trump administration to get things that we have been able to keep them from getting in the past — for instance, the consolidation that we see in the meat industry. Four companies control 80% of beef production, control just under 70% of pork production and around 60% of poultry production. They’re not satisfied with that kind of concentration. They have now worked with the Trump administration to get the Department of Justice and the federal trade agency to agree that they would further weaken merger reviews in our already lax system for looking at antitrust violations. You know, supposedly we have an economy that’s based on competition, but that is absolutely not true, especially in the meat industry.

And they’re also taking this opportunity to push to privatize meat inspection. They’ve already done this successfully in the poultry industry, where it’s now possible to have line speeds not of 140 chickens a minute as it used to be, which was already too many, but 175 birds per minute. Now they are pushing to privatize swine inspection. The current law is 1,100 hogs can be slaughtered in an hour with seven meat inspectors — already way too fast. They are pushing to privatize so that there’s no cap on line speed and that there would be only three inspectors on the line, even though that means that there would be no inspector seeing if a hog was diseased. That diseased hog —

JUAN GONZÁLEZ: Well, Wenonah, Wenonah, if I can interrupt you for a second, I just wanted to ask you a little bit more in terms of the constant trend in food production toward factory farms and, as you say, concentration of labor in these huge plants, and also the use of immigrant labor, for the most part. I’m willing to bet that the bulk of those workers at this Smithfield in South Dakota are Latino and other immigrant workers, because that’s been the trend in the industry as a whole. How all of this works together to make the situation even worse right now?

WENONAH HAUTER: Well, this is — the pandemic is really the perfect storm of a completely dysfunctional food system. And yes, the workers at slaughter facilities do tend to be Latino and low-income workers. Often they’re undocumented. And if they push for protections, if they push for a fair wage, the meat industry works with ICE to come in and deport those workers. So it’s a terrible situation. We should also remember that the —

WENONAH HAUTER: OK. The way that we produce food has to change, because pandemics like this begin in situations where animals are being produced living in their own waste, breathing terrible fumes that give them viruses. And then it only takes a microbe’s mutation to cause bacterial and viral diseases. We will see more pandemics if we don’t change the way we produce meat in this country — in fact, food. And we need to ban factory farms and stop this terrible concentration that’s really threatening our food system.

AMY GOODMAN: Wenonah Hauter, we want to thank you so much for being with us, executive director and founder of Food & Water Watch. One of the world’s leading meat companies, JBS S.A., says it will close its beef facility in Greeley, Colorado, until April 24th, after a 30-year employee died of COVID-19. More than 6,000 people work at that facility. This is one of the workers, 57-year-old Rosario Bustamante.

ROSARIO BUSTAMANTE: [translated] In the beginning, they didn’t make any changes. We continued working under the same conditions. No action was taken. They didn’t protect us. Nothing. The only thing they did was provide hand sanitizer. We started seeing changes when people started getting infected. …

We found out about people being infected, because our supervisor talked to us. That was Monday, March 30th, in the afternoon. He told us, “We don’t want you close to people. You need to keep your distance, because we just learned that the people that were taken from here tested positive to coronavirus.” …

I went to work, and I started feeling ill. They took me to an infirmary, and they told me to go back to work. Two guys from security overheard, and they told me, “No, you can’t go back to the plant. You need to go home. You have fever.” That’s when I left. And I spent three days in bed with a high fever, body aches. On Friday, April 3rd, I went to see my doctor, and he told me not to worry, that everything was fine. But he recommended not going back to work.

AMY GOODMAN: For more on the conditions in meatpacking facilities during the pandemic, we’re joined by Magaly Licolli, who is executive director of Venceremos, an advocacy group for poultry plant workers. She’s joining us from Springdale, Arkansas, which is home to Tyson Foods headquarters.

In these last minutes we have together, Magaly, if you can talk about the scope of the problem at the poultry plants, and particularly in the midst of this pandemic? Who works there, and what are you facing?

MAGALY LICOLLI: Yeah, thank you for inviting us. And I think it’s important to say that the problems that poultry workers are facing now are not new; however, the lack of benefits are more evident under this crisis. Poultry workers do not have basic benefits, so workers are used to go to work while sick. And now with this pandemic, workers are just terrified to go to work, the lack of measurements of these companies to take social distancings to prevent the spread. It’s just not evident. So, workers are risking their lives, and now they are demanding that these companies provide to them paid sick benefits for them to be able to be at home and not risking their income.

Right now many of the companies are taking these measurements of checking in the temperature. However, that is not what workers feel comfortable with, because once the worker shows symptoms of fever, it means that the worker had already been — all the workers have been exposed to the virus. So, right now there is no transparency of how many workers are being tested positive for COVID-19, and the company is just not providing that information to workers.

JUAN GONZÁLEZ: And, Magaly, Magaly, what kind of protective equipment are the workers being provided, if any?

MAGALY LICOLLI: Well, right now, like, for example, the Tyson plants, they do not have any masks or gloves. In other plants, they’re even — the workers have to pay for their masks or gloves. So they are not even being granted those basic protective gears to do their work.

AMY GOODMAN: And can you talk about the picking up of the pressure to raise the processing line speeds at Tyson?

MAGALY LICOLLI: Yes. I mean, this issue has — workers have been battling this issue for so long. Right now workers used to process 145 chickens per minute. That led to long, life injuries to workers. So we were —

MAGALY LICOLLI: So, right now the workers are more in danger by this line speed increase, and so — as well as the consumers.

AMY GOODMAN: We want to thank you for being with us, and of course we will revisit this issue. Magaly Licolli, executive director of Venceremos, the advocacy group for poultry plant workers.

That does it for our show, Democracy Now! working with as few people as possible on site. The majority of our amazing team is working from home, and we thank each and every one of you. I’m Amy Goodman, with Juan González. 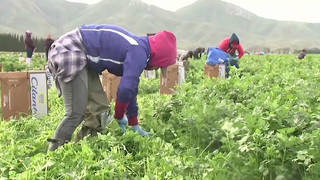