“Our Bodies Are On the Line”: NYC Nurses Demand Protective Gear as COVID-19 Death Toll Skyrockets

Nurses in California, Florida, Kansas, Missouri, Nevada and Texas are protesting one of the nation’s largest hospital chains for a “lack of preparedness” amid the coronavirus pandemic. They’re calling on HCA Healthcare to provide optimal personal protective equipment, or PPE, for nurses and other staff. In New York, the epicenter of the pandemic in the United States, nurses and doctors at Montefiore Medical Center in the Bronx protested Thursday over the lack of PPE. Today another protest is underway in front of Mount Sinai Hospital in Manhattan calling for more PPE, better staffing and COVID-19 testing for frontline staff. Live from the protest, we speak with Tre Kwon, an ICU nurse at Mount Sinai West and a member of the COVID-19 Frontline Workers Task Force at Mount Sinai Hospital. Kwon ended her maternity leave early to help her colleagues address the COVID-19 pandemic, which is overwhelming New York City hospitals. Kwon is also a member of Left Voice.

AMY GOODMAN: We’re broadcasting from the epicenter of the pandemic in the United States. We’re broadcasting from New York City. As the coronavirus death toll in the U.S. passes 6,000, medical workers nationwide have been forced to work shifts of up to 16 hours, are reporting chaotic scenes of overflowing hospitals and bodies quickly filling refrigerated trucks serving as makeshift morgues. In response, nurses in California, Florida, Kansas, Missouri, Nevada and Texas are protesting one of the nation’s largest hospital chains for a, quote, “lack of preparedness” amid the coronavirus pandemic. They’re calling on HCA Healthcare to provide tests, personal protective equipment, known as PPE, for nurses, doctors and other staff. Here in New York City, where more than 1,500 people have died, nurses and doctors at Montefiore Medical Center in the Bronx protested Thursday over the lack of PPE. Today another protest is underway in front of Mount Sinai Hospital in Manhattan, calling for more protective equipment, better staffing and COVID-19 testing for frontline staff.

Tre, welcome to Democracy Now! Can you describe where you are, who you’re with and what you’re demanding right now?

TRE KWON: Hi, Amy. I’m a nurse here at Mount Sinai. We’re in front of the emergency room here. We’re spilling out into the sidewalk to demand protective personal equipment, ventilators and adequate safety protocol for healthcare workers on the frontline. We formed this task force because we saw that the whole saying of, you know, “We’re all in this together,” that Cuomo, Trump and other politicians and even CEOs are claiming, is totally bogus. We are the ones who have our bodies on the line. We are the ones who are putting our families at risk and ourselves at risk at our job. We’re demanding attention now.

Instead of rapidly responding to this pandemic with the appropriate ventilators and protective gear, they’re actually blaming nurses and even accusing folks of hoarding supplies. Cuomo, who’s trying to scramble now to build beds across Central Park and in Javits Center, he’s doing the big talk, but he’s actually the one who’s been closing down hospitals over the last decade. He’s been the kingpin of hospital mergers. He’s also the one to even now propose Medicaid cuts during a pandemic crisis. So, we see that the solution is not going to be presented by these demagogues, who are even now passing a $2 trillion stimulus package for corporations with pitiful relief for working-class folks.

AMY GOODMAN: Tre Kwon, can you talk about the COVID-19 Frontline Workers Task Force, what exactly it is? And can you respond to President Trump repeatedly tweeting and speaking at his daily news conference suggesting that the hospitals in New York are hoarding equipment and ventilators, while the mayor of New York City, de Blasio, says that New York City will run out of ventilators in just a few days?

TRE KWON: Amy, the COVID Frontline Workers Task Force, we formed over the last week when we saw that our demands were not being met. It is an interdisciplinary task force of healthcare workers on the frontline — residents, doctors, nurses. We invite all healthcare workers to form those kinds of worker-led assemblies and committees at their hospitals. Just as the Jacobi Medical Center was led by independent, rank-and-file nurses, this initiative was totally planned by us, for us. We invite the union leaderships to take up these kinds of organizings and support it fullheartedly.

In fact, this morning, the whole claim Trump’s saying that we’re hoarding supplies is absolutely absurd. In the hospitals that we are working at now, we have to reuse and reuse. We have to use one gown, for some folks, for the entire shift. We have negative pressure rooms that have not been tested and ensured that they are actually effectively isolating airborne particles. We have to use one face shield, and we’re supposed to wipe that with hydrogen peroxide once we come in and out of a patient’s room. Meanwhile, we’re in crisis with patients being intubated left and right. We have, as you know, morgues filling up. So this claim is absolutely absurd, and it’s a total lie. De Blasio, he’s calling attention to the lack of ventilators, but it’s not just ventilators. Sinai, up until a few days ago, only had several days left of protective personal equipment. Seven days was what we were told three or four days ago. So, we don’t know where the situation is now.

And we see also that the response that we’re getting this morning, we were told, coincidentally, that with the calling of our action, Mount Sinai executives are now finally responding to our demands to extend the quarantine to the appropriate 14 days, so that we can recover and come back to work and not infect our patients, not infect our peers. And they also are supposedly offering free testing for healthcare workers; however, have not told us when that’s going to begin and how we’re going to be able to access that testing. And it’s only after H+H hospitals have announced the same policy.

AMY GOODMAN: Tre Kwon, can you talk about your own personal experience? You’re astounding. You gave birth three months ago. You were supposed to be on maternity leave for six months?

TRE KWON: Well, Amy, you probably know that this country doesn’t provide paid maternity leave for the working class and birthing folks. So, I was going to stay out for five to six months just to spend time with my baby, and use my savings. I went per diem during pregnancy, because I was feeling really sick and dehydrated, and I had medical conditions during pregnancy, because we can barely take a break during our shifts. We were already chronically short-staffed before this pandemic hit.

But I came back a few weeks ago because I was home full of worry and obsessed with what was going on with my co-workers, anxious like the rest of us watching on our TVs and computers at home. And I could not stay home anymore while I heard my co-workers and colleagues scrambling on the frontlines. You know, maybe it’s a risk to myself, maybe it’s a risk to my baby, but this is what I am. I’m a nurse. I think that it’s my duty to take care of patients, to some extent, what I can do.

AMY GOODMAN: You have released a statement of purpose, which notes, “Under the Defense Production Act, the president could take over 3M, Honeywell and Kimberly-Clark, the largest manufacturers of N95 masks and other protective equipment.” Explain that further.

TRE KWON: So, what’s really necessary, Amy, my opinion, is that manufacturing industry needs to be nationalized and put under total public control — actually, democratic workers’ control. That would be the only rational way to respond to this crisis. GM — all these corporations are sitting around waiting for their package from the federal government. And they’re right to wait for that, because, historically, that’s what has happened. But ultimately, what is required is centralized, coordinated planning, but not under the hands of Trump. Trump is yet another billionaire boss bigot who’s also looking out for his own interests. So it really needs to be under the control of the public, the working class. So, I mean, this is an idea, and I think that in this crisis it’s finally becoming really concrete, why does healthcare need to be national, public and a human right, why can we not have corporations in charge of determining who gets care. People are too afraid to go to the hospital, because — even with COVID, because they’re afraid of the bills that will remain behind them after they die.

AMY GOODMAN: Tre Kwon, I want to thank you for being with us, ICU nurse at Mount Sinai West, member of the COVID-19 Frontline Workers Task Force at Mount Sinai Hospital. She is standing in front of her hospital right now, involved in a protest. I wish you the very best. You and all of your colleagues are heroes, defending the lives of everyone, even beyond your particular hospital. I wish your baby all health, your family all safety. Thank you so much.

When we come back, we look at the response to the coronavirus in Asia, from the Philippines to Singapore to Taiwan. Stay with us.

NEXTAs Virus Spreads in Philippines, So Does Authoritarianism: Duterte Threatens Violence Amid Lockdown 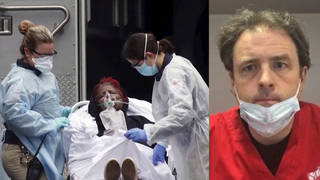