In the Philippines, authoritarian President Rodrigo Duterte said Wednesday he’s ordered soldiers to shoot to kill residents if they resist a strict lockdown on the island of Luzon. His order came after residents of Manila’s Quezon City shanty town staged a protest, saying they’ve gone hungry without food promised when the lockdown began more than two weeks ago. The Philippines death toll is 136 with more than 3,000 confirmed COVID-19 cases. As those numbers grow, nurses and doctors report a drastic lack of personal protective equipment. While the Philippines has seen a surge in cases, Indonesia is now reporting the second most fatalities in Asia after China with 181 dead. Singapore, Hong Kong and Taiwan have also had success in containing the virus. For more on how countries in the region are responding to coronavirus, we speak with Natashya Gutierrez, editor-in-chief of VICE Asia.

AMY GOODMAN: This is Democracy Now!, democracynow.org. We’re broadcasting from the epicenter of the pandemic in the United States, New York City. I’m Amy Goodman. But we’re turning now to look at the coronavirus pandemic in Asia. In the Philippines, authoritarian President Rodrigo Duterte said Wednesday he’s ordered soldiers to shoot to kill residents if they resist a strict lockdown on the island of Luzon. His order came after residents of Manila’s Quezon City shanty town staged a protest, saying they’ve gone hungry without food promised when the lockdown began more than two weeks ago. The Philippines death toll is 136 with more than 3,000 confirmed COVID-19 cases. As those numbers grow, nurses and doctors report drastic lack of personal protective equipment. Seventeen frontline medical workers have died.

This week, Democracy Now! spoke with ER nurse Aris Santos Serrano, who works in a hospital near Manila.

ARIS SANTOS SERRANO: The situation right now is a little bit difficult because of the surge of patients that we are having right now in our country, the Philippines. … I’m working in a Level 1 hospital, so we usually do not cater ICU type of patients, but since of the surge, we are obliged to at least treat emergency cases for patients who are showing symptoms of COVID-19.

The one consideration is the PPEs. We need to have them. But, of course, since there is only limited number of supplies provided for us, it is really difficult to attend patients. Our current situation right now, it’s like in my department they are allotting one PPE for one COVID nurse. So that’s difficult, because if a patient will come with a very critical condition, it is hard for one nurse only to attend to that patient. With the scarcity, it’s like I’ve been told earlier — I had a meeting with my boss, with my bosses — and it’s like our stock of PPEs and N95 masks would last for like three to four days. Our enhanced community quarantine will still be two weeks, two more weeks to run, and we are still expecting the cases to rise up. It’s really sad, because there are doctors who are dying right now in my country.

AMY GOODMAN: While the Philippines has seen a surge in cases, Indonesia is now reporting the second most fatalities in Asia after China with 181 dead. Nearly as many have died in South Korea, which saw an early surge in cases but has been widely praised for its efforts to flatten the curve. Singapore, Hong Kong and Taiwan have also had some success in containing the virus. Later in the broadcast, we’ll talk about Taiwan, but for right now we’re going to Singapore, where we’re joined by Natashya Gutierrez, editor-in-chief of VICE Asia.

Welcome to Democracy Now!, Natashya. Thank you for joining us. Can you start off by talking about the situation in the Philippines?

NATASHYA GUTIERREZ: Yes, absolutely. So, you know, it’s just heartbreaking to hear that account of that nurse, because it’s exactly true. We’re hearing frontliners not even being protected, and so there’s questions. And how can doctors curb this virus if they themselves are in danger?

And in the Philippines, we’re talking a country of 100 million people. March 16, we saw a lockdown in the island of Luzon. That’s 57 million people. And that was only just the third country, after Italy and China, to have had such extreme measures put in place. And President Rodrigo Duterte at that time had declared a state of emergency for six months. Note that this is the longest state of emergency any leader has declared. And so, now it’s still that way. People can only go out for essentials, meaning just food and groceries, once a week. But I think what made many nervous and continue to make people nervous are the wide deployment of military and police on the streets. There’s a curfew in the Philippines. People are unable to leave their house between 8 p.m. to 5 a.m.

The president has also asked for emergency powers to reallocate funds of 200 billion pesos — that’s about $4 billion U.S. — to help the poor. But as mentioned earlier in the program, there are riots, because it’s not clear where this money will go. There has not been any clear plan from the government. And so, I would say that currently the overall general sentiment in the Philippines has been one of disappointment and confusion over the government’s actions. Many people are asking for clarity regarding the government’s plan.

AMY GOODMAN: And can you talk more about Duterte, who’s known of boasting about raping people, to personally murdering people, using this moment of the pandemic to expand his authoritarian powers?

NATASHYA GUTIERREZ: That’s exactly right. There’s a lot of concern over President Duterte’s actions. It’s not a secret that he is someone who has authoritarian tendencies. He has declared a deadly, brutal drug war — sorry, war against drugs. And this has actually targeted mostly the urban poor.

And sadly, we’re seeing the same with the pandemic. We’re seeing that the people who are getting arrested are the poorest of the poor. We’ve had politicians, senators break their stay-at-home notices, their quarantine, one even going so far as entering a hospital and putting frontliners at risk. And yet he has not been arrested, has not been apprehended, and the Department of Justice said that we should treat him with compassion. Meanwhile, we’re seeing people breaking quarantine who are being put in dog cages. We’re seeing arrests of homeless people. So, again, the ones who are really suffering in this sort of a militaristic operation are the poorest of the poor.

And, of course, again, as mentioned earlier, his requests for emergency powers, again, it’s just making people quite nervous, because that’s just added powers. And yet, the Filipino people are not seeing any major differences or any confidence, I guess, in the government to see that they’re actually using the funds properly.

AMY GOODMAN: These comments that Duterte made — “Shoot them dead. I will not hesitate. My orders are to the police, to the military, also with the village officials, if there are troubles or occasions where there’s violence and your lives are in danger, shoot them dead,” he said.

NATASHYA GUTIERREZ: Yes, he said this two days ago, and this is very reminiscent of the way he also directed police to kill people who are using drugs. And the scary part is, as soon as he did say that, you know, from the beginning of his term in 2016, we then suddenly saw a lot of killings. So we’re hoping that that is not the case, that the officials and authorities will understand how difficult this pandemic is for some informal settlers, people who can’t even have the luxury of practicing social distancing measures, and just treating them with justice, hopefully. But it’s what makes a lot of people nervous, because we’ve seen it in the past happen, specifically with the drug war.

AMY GOODMAN: Compare what’s happening in the Philippines to Indonesia, as well as where you are, in Singapore.

NATASHYA GUTIERREZ: In Singapore, you know, I think the number one thing that the government has done from the get-go is clear communication. Obviously, it’s a small country, unlike the Philippines, unlike Indonesia. It has 5 million people. It has a fairly cohesive government and very strong medical resources. But, you know, from the get-go, they implemented what every outbreak response should be. That’s early case detection, aggressive and thorough contact tracing, and isolation or strict quarantine. It was very quick to act as the situation evolved. When we saw more imported cases, they gradually closed borders. Just this afternoon, just four hours ago, Prime Minister Lee Hsien Loong also announced more extreme social distancing measures, which is essentially a partial lockdown, starting Tuesday. That’s after we saw an increase in the number of local transmissions.

So we’re seeing a government that is nimble, that is adjusting, that is clear in their communication. What’s been consistent throughout is constant reassurance through not just the words of this government, but as well as economic stimulus plans and a consistent messaging on things as simple as food will not run out. They’ve clearly explained their policies, which is such a drastic difference from what’s happening in the Philippines. And residents are quite happy with the response of the government here.

As for Indonesia, that is the fourth-largest population in the world. We’re talking 200 million people. And I think what happened with Indonesia was that when a lot of the other countries started declaring states of emergency or perhaps announcing their first cases, Indonesia was very much in a state of limbo, announcing that it was business as usual. Bali was open to tourists. And it made people quite nervous, because how can a country that big, an island of 17,000 people, possibly not have a single case? And most people assumed that it was because they were not mass testing. And only, I think, about two days ago, or even just yesterday, did President Joko Widodo declare a state of emergency. But until now, Jakarta and major cities remain not on lockdown. There is no national lockdown, despite the fact that its mortality rate is now at 9.4% for COVID-19.

AMY GOODMAN: Natashya Gutierrez, I want to thank you so much for being with us, editor-in-chief of VICE Asia. But we are not leaving Asia right now. 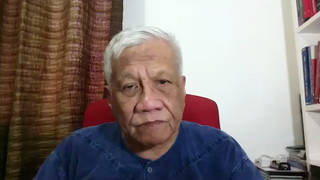