As millions shelter in place around the world, we speak with Albert Woodfox, who served the longest time in solitary confinement of any prisoner in the United States. Known as one of the Angola Three, along with Robert King and Herman Wallace, Woodfox was held in isolation for nearly 44 years at the Louisiana State Penitentiary, known as Angola. He was convicted of killing a guard in jail, but always maintained his innocence. He says he was targeted for co-founding the first Black Panther chapter in Angola. He was released in 2016 and is now 73 years old. His memoir is “Solitary: Unbroken by Four Decades in Solitary Confinement. My Story of Transformation and Hope.” Woodfox says that while speaking to people around the country, he is often asked to describe what solitary confinement is like. “We never had a reference other than our own experience,” he says, “but this coronavirus pandemic, now people have a small window into what it is like.”

StoryJan 31, 2022Leonard Peltier Has COVID; His Lawyer — an Ex-Federal Judge — Calls for Native Leader to Be Freed

AMY GOODMAN: We want to end back with Albert Woodfox. Albert, right now people are being told to remain in isolation, whether they’re sick or healthy, unless they get so sick that they should go to a hospital. I mean, there is no comparison to what you endured. You served more time in solitary confinement than any prisoner in the United States, close to 44 years. But can you talk about how you kept your sanity when you were behind bars in solitary?

ALBERT WOODFOX: You know, Robert Hillary King and Herman Wallace, the other two members who make up the Angola Three, you know, by any stretch of imagination, our situation was extraordinary. But the fact that we had become members of the Black Panther Party, we had been politicized. We had our political and social consciousness — level of consciousness raised, you know, so we kind of like understood the purpose of solitary, what it was meant to do. And so we consciously, together and individually, developed programs to combat that, you know, such as exercise programs, study programs, in which we devoted so many hours a day to just reading, and not just sit in a cell for 23 hours out of a 24-hour period and vegetate, you know, or become consumed by the prisoner culture, all the other distractions that was given to solitary over the decades, such as TV and radios and CD players and stuff like that. And the fact that we were looked upon as leaders in the prison population demanded of us that we prepare ourselves by educating ourselves and knowing whatever subject matter that was brought to our attention, so we would be adequately informed enough to address it.

But, you know, solitary and surviving solitary is an individual’s game. You know, it’s still a mystery why men, women, in some cases, children, react to the same conditions differently. You know, Robert and I was talking the other day, and Robert has a saying: “When somebody’s sold you lemons, you make lemonade.” And so, we have been talking, and we knew at some point in time this will pass. And one of the questions we are asked the most when we go around the country and outside the country is “What’s it like to be held in solitary?” And so, you know, we never had a reference other than our own experience, but this coronavirus pandemic, now people have a small window into what it’s like to be held, you know, with the advice of the CDC and other [inaudible] —

AMY GOODMAN: Albert, we have to go, but I want to thank you so much for being with us. And I want to encourage people to go to our website at democracynow.org. We had you in studio for an hour talking about your experience just after you got out of prison. That book, truly remarkable, a National Book Award finalist, Solitary: Unbroken by Four Decades in Solitary Confinement. My Story of Transformation and Hope. Albert Woodfox, speaking to us from New Orleans, he served the longest time in solitary confinement of any prisoner in the United States.

This is Democracy Now! When we come back, we are heading south to Ecuador to talk about the coronavirus there. Stay with us.

AMY GOODMAN: Spanish singer-songwriter Luis Eduardo Aute singing “At Dawn.” Luis died in Madrid on Saturday at the age of 76. He was best known for his anti-fascist songs during Spain’s transition from dictatorship to democracy, longtime supporter of Palestinian causes.

“People Are Dying in the Streets”: Ecuador Struggles to Cope with COVID-19 as Cases Skyrocket

NEXT“People Are Dying in the Streets”: Ecuador Struggles to Cope with COVID-19 as Cases Skyrocket 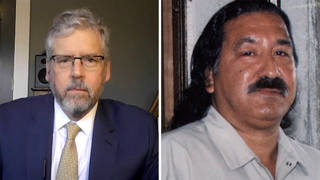 Leonard Peltier Has COVID; His Lawyer — an Ex-Federal Judge — Calls for Native Leader to Be Freed