The spread of COVID-19 threatens the lives of more than 2.3 million people locked up in prisons and jails throughout the United States. We look at how the call to release prisoners during the coronavirus pandemic makes the case for prison abolition, with scholar Ruth Wilson Gilmore, co-founder of California Prison Moratorium Project and Critical Resistance and the author of “Golden Gulag: Prison, Surplus, Crisis, and Opposition in Globalizing California.” Her forthcoming book is “Change Everything: Racial Capitalism and the Case for Abolition.”

AMY GOODMAN: I want to bring in another guest into this conversation, as we turn now to look at the coronavirus and the case for abolition. The spread of COVID-19 poses mortal danger to the more than 2.3 million people locked up in U.S. prisons and jails. As of May 1st, The Marshall Project reports more than 14,000 incarcerated people and nearly 4,000 workers in state and federal prisons have tested positive for the virus — and that number is expected to be far higher due to lack of testing. Activists and human rights defenders are demanding the mass release of prisoners to save lives and halt the spread of this deadly virus.

For more, we’re joined by abolitionist scholar Ruth Wilson Gilmore, professor of Earth and environmental sciences and director of the Center for Place, Culture and Politics at CUNY Graduate Center. She is co-founder of California Prison Moratorium Project and Critical Resistance and author of Golden Gulag: Prison, Surplus, Crisis, and Opposition in Globalizing California. Her forthcoming book is Change Everything: Racial Capitalism and the Case for Abolition.

Professor Ruth Wilson Gilmore, it’s an honor to have you with us, from Lisbon, Portugal, where you are right now. Can you start off with the basics? How would you define “abolition”? And can you put it in a pandemic context right now?

RUTH WILSON GILMORE: Oh, why, certainly. Thank you for having me on the show. And it was very good for me to hear the commentary from my colleague in Texas.

Abolition seeks to undo the way of thinking and doing things that sees prison and punishment as solutions for all kinds of social, economic, political, behavioral and interpersonal problems. Abolition, though, is not simply decarceration, put everybody out on the street. It is reorganizing how we live our lives together in the world. And this is something that people are doing in a variety of ways throughout the United States and around the planet already. It is not a pie-in-the-sky dream. It is actually something that is practical and achievable in the city of New York, in Texas, in South Africa, around the world.

JUAN GONZÁLEZ: Well, could you talk about this response from other parts of the world to the question of crime and punishment, and why, obviously, we often talk about how the United States has such a disproportionate percentage of the world’s prison population?

RUTH WILSON GILMORE: Yes. It’s kind of interesting, although it’s probably just a coincidence, that the United States has about one in four prisoners in the world. It also has about one in four COVID deaths in the world. And although that might just be a coincidence, it does make me stop and think about how it is that we organize ourselves in the United States across the disparate and various polities that go from the Atlantic to the Pacific and beyond.

So, in other parts of the world, what one sees is a very simple fact: Where life is precious, life is precious. In places where the state, the government, municipalities, social justice organizations, faith communities, labor unions work together to lift up human life, the incidents of crime and punishment, including the incidents of interpersonal harm, are less likely to occur. And this is in places where populations are every bit as diverse as in the United States. We also see that in places where inequality is the deepest, the use of prison and punishment is the greatest. Nowhere, however, gets even close to the United States.

AMY GOODMAN: Professor Ruth Wilson Gilmore, you talk about organized abandonment and organized violence of the state. You talk about this as twin evils of the pandemic. Please explain.

RUTH WILSON GILMORE: OK. Did I use the word “evil”? I might well have done. They’re twin aspects of the pandemic. And that is to say that organized abandonment has to do with the way that people, households, communities, neighborhoods do not have equal levels of support and protection against the pandemic, and that the response to people trying to figure out how to shelter themselves and save themselves — let’s take an example from the city of New York, homeless people living in the subways — is to use policing and criminalization — i.e. punishment — to resolve the problems of abandonment.

Now, organized abandonment is not only abandonment by the state, it’s also abandonment by capital, whether it’s abandonment by real estate capital, that produces more and more luxury apartments but not affordable housing, as we can see in struggles throughout the city of New York and around the United States, or tourism capital, that pushes certain kinds of people out of certain areas of the city and only welcomes them in if they work as workers in the service industry, delivering, serving, taking care of and cleaning. There are many, many ways for us to think about organized abandonment, but that thinking should bring us to consider both how capital — large and small — and state — municipal or greater — work together to raise barriers to some kinds of people and lower them for others.

RUTH WILSON GILMORE: Certainly. And my colleague from Texas already raised this in her discussion with you. The assumption underlying that division suggests that we know something about one group of people that is never, ever going to change. And what we forget is, most people who go to prison, for whatever the controlling offense — which is to say, what they are convicted of — leaves someday. That means that instead of thinking that we have these two groups that we can predict the behavior of, that we ought to be thinking about the kind of life that makes possible people to return to the world, from which they’ve been removed, in such a way that any harm that might have occurred does not harm anybody again in the future.

What abolitionists do, in all kinds of work surrounding what we call transformative justice, is to try to work that out. So, some of the leading abolitionists in the United States and around the world today are people like Mariame Kaba and Andrea Smith and Kelly Gillespie and others, who came out of work against domestic violence — i.e. it was in doing work to try to fight against violence and harm, that they realized abolition was the only way to resolve the problems that were not being resolved by having better, faster, more swift and sure punishment when somebody harmed somebody else.

AMY GOODMAN: I wanted to bring Azzurra back into the conversation to ask about the media coverage of the prisoners, again, and get Ruth Wilson Gilmore’s response to this astounding situation in Ohio, 80% of the prisoners testing positive. You have that happening right now in Ohio. In — what is it? In Tennessee, you have — in Arkansas, Governor Asa Hutchinson announced Tuesday nearly 40% of the state’s coronavirus cases are concentrated at Cummins maximum-security prison, where some 850 prisoners have tested positive. In New York, the former head of the jails’ doctor is accusing MDC, Metropolitan Detention Center, of not releasing figures on the prisoners who are detained there. So, what is your exact demand right now, as your husband remains in prison, and the response of the governor of Ohio, DeWine?

AZZURRA CRISPINO: Sure. First of all, I just wanted to thank Professor Wilson Gilmore, because my husband has been convicted of a violent offense. That doesn’t mean that he’s a violent person. And people absolutely can change.

I think, in terms of the media coverage, one of the frustrations has been that Ohio DRC has been unwilling to release the names of the dead, especially at Pickaway. We have one of our coalition partners, who was formerly incarcerated there, who really wants to know which of his friends may have died, but we are being told that we can’t have that information due to privacy reasons. Yet, at Marion Correctional, when recently two well-known people who had committed murders died, both of them got media coverage in their deaths. But when Jesse Zeigler dies — right? — a beloved father, then we don’t talk about him, right?

So, from the use of the word “inmate” versus “incarcerated person,” the focus on state actors, such as Governor DeWine, without focusing on what everybody else can do, we’ve seen, I think, some pretty mixed media coverage. And I would like to see journalists continue to do better by reaching out to people who are directly impacted, and uplifting those voices. I think the people who are closest to the problem are always closest to the solution. And it’s so wonderful to see journalists, such as Democracy Now!, doing a great job of covering these issues.

JUAN GONZÁLEZ: And, Professor Wilson Gilmore, we have about a minute left, but I wanted to ask you. You focus a lot of your research and attention on the role of incarceration in California specifically, the nation’s biggest and most populous and prosperous state. Could you talk about that, as well, the lessons from California?

RUTH WILSON GILMORE: Certainly. I think the major lesson I would like to share with our audience, these last few seconds that we have together, is that California was on a path to making what was an huge and bulging prison system to be bigger and bigger and bigger. And that’s where contemporary abolition movement in the United States took root. And we fought and fought and fought, throughout urban and rural California, making common cause with labor unions, healthcare workers, faith communities, environmental justice activists, and other, to denaturalize the notion that crime was the problem for which prisons and punishment was the right solution, as a result of which the number of people in California prisons is much lower than it was even imagined it could be in the year 2000, because of the work that abolitionists did. That work needs to expand. But we see victories in Los Angeles County, where a plan to build multibillion-dollar jails was defeated after nearly 15 years of struggle. We can —

AMY GOODMAN: Ruth Wilson Gilmore, we have to leave it there, but I want to thank you so much for joining us, from Lisbon, Portugal, author of Golden Gulag: Prison, Surplus, Crisis, and Opposition in Globalizing California. Her forthcoming book, Change Everything: Racial Capitalism and the Case for Abolition. And I want to thank Azzurra Crispino, co-founder of Prison Abolition Prisoner Support. I’m Amy Goodman, with Juan González. Stay safe. 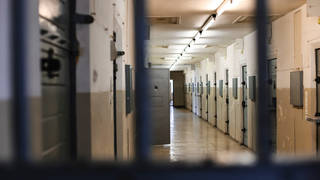