In a historic 6-3 ruling, the Supreme Court ruled Monday that Title VII of the 1964 Civil Rights Act, forbidding workplace discrimination on the basis of sex, applies to gay and transgender people. The decision comes just days after the Trump administration reversed health protections for transgender people under the Affordable Care Act. “This truly is a historic ruling,” says Chase Strangio, deputy director for transgender justice with the ACLU’s LGBT & HIV Project. “This is going to have a transformative effect on federal civil rights laws in the context of housing, education and healthcare, as well as credit.” We also speak with journalist Imara Jones, creator of TransLash.

AMY GOODMAN: Well, we’re going to begin with the Supreme Court ruling Monday, that landmark ruling that a civil rights law protects gay, bisexual and transgender people from discrimination in the workplace. The historic 6-to-3 ruling marked a massive victory for the LGBTQ community, as well as everyone, as was penned by one of the court’s most conservative justices: Trump appointee Neil Gorsuch. Conservative Chief Justice John Roberts joined the majority opinion in stating that Title VII of the 1964 Civil Rights Act, which forbids workplace discrimination on the basis of sex, applies to gay and transgender people. At least half of the 50 states previously allowed employers to fire workers for being LGBTQ.

One of the key cases the court considered was that of Aimee Stephens, a transgender woman who was fired from her job at a Michigan funeral home in 2013. Stephens did not live to see her victory in the Supreme Court. She died last month at the age of 59. The Supreme Court also reviewed the case of Donald Zarda, a skydiving instructor who said he was fired for being gay. He died in an accident in 2014. This is Zarda’s lawyer, Gregory Antollino.

GREGORY ANTOLLINO: It’ll be a catalyst toward changing history. You know, it’s a new decision. It’s going to take the states that don’t protect LGBT rights time to adjust to, but it is certainly a catalyst, an historical one. And that sounds bigger than I can imagine at this time.

AMY GOODMAN: The victory comes amidst a nationwide uprising against police brutality and racism that’s often shone a light on violence against Black trans women. In Brooklyn Sunday, at least 15,000 people marched through the streets in defense of Black trans lives after two more Black trans women were killed last week. It also comes just days after the Trump administration reversed health protections for transgender people under the Affordable Care Act.

Well, for more, we’re going to Boston, Massachusetts, to speak with Chase Strangio, deputy director for transgender justice with the ACLU’s LGBT & HIV Project. He was one of the attorneys for Aimee Stephens in the landmark Supreme Court civil rights case to protect LGBTQ workers.

Chase, welcome back to Democracy Now! Can you talk about the significance of the victory, and the fact that the person who wrote the majority opinion was the Trump appointee, Neil Gorsuch?

CHASE STRANGIO: Thanks, Amy. And thanks for having me back and actually being able to talk about something positive for once.

And in terms of the breakdown, absolutely, we briefed this case for Neil Gorsuch. He was our — he was our swing vote. He is a textualist. His jurisprudence is premised on the idea that you look to the words of the statute, not to the intentions of Congress at the time a statute was enacted. And we hoped that he would stick to his principles instead of reverse-engineer an outcome based on politics. And he did that. And the chief joined. And I am shocked, but it was the right and righteous decision. And we were right on the law, and so were they.

JUAN GONZÁLEZ: Well, Chase, in terms of the implications of this decision, just last week, the Trump administration reversed health protections for transgender people under the Affordable Care Act. And they announced this, ironically, on the fourth anniversary of the Pulse massacre that claimed 49 lives in Orlando, Florida, at a gay nightclub. Your sense of how this — would this decision have an impact even on this latest move of the Trump administration?

CHASE STRANGIO: Absolutely, it will have a huge impact. So, one of the things to point out is that the Trump administration issued a comprehensive anti-trans regulation at 4 p.m. Eastern time on a Friday, knowing that the Supreme Court was going to issue opinions 10 a.m. on Monday morning and could likely undo the very regulations that they were putting forth. So it was an act of just absolute cruelty towards LGBTQ people, and people who need access to abortion, I might add, as well.

But ultimately, a federal agency cannot contradict the statute that it is implementing. And the ACA has a prohibition on sex discrimination, and that is the source of the protection. So the Trump administration is not the final word on the meaning of sex discrimination under federal law; the Supreme Court is. And they just made just absolutely clear that prohibitions on sex discrimination include LGBTQ people. So I think that rule is dead on arrival.

You know, obviously, people are going to continue to face discrimination. We know that even when legal protections are in place, particularly our Black and Indigenous and Brown trans sisters, our fem sisters, are facing relentless discrimination, and so we have to keep fighting. The laws is not the only source of protection, absolutely, but this is going to have a cascading effect. And all of the administrative actions that this administration has taken, since day one, in 2017, from rescinding Title IX student guidance, those actions are completely undermined by yesterday’s Supreme Court ruling.

AMY GOODMAN: I wanted to bring Imara Jones into the conversation, journalist, founder and creator of TransLash and a Soros Equality fellow. If you could comment on the significance of Friday’s Trump order that would take away protections for transgender patients under the Affordable Care Act, and then what happened yesterday, Imara?

IMARA JONES: Yes. Thank you, Amy. And it’s great to be back on, as well.

Those regulations that allowed for equal access to trans people are pivotal in two primary ways. The first way is that for trans people who either need or choose to have medical interventions to aid with transition, either hormones or surgeries, we know that those medical interventions are lifesaving. They have a dramatic impact not only on people’s ability to, quite frankly, stay alive, but also to have an amount of well-being that allows them to be full citizens, and so it’s pivotal in that way.

The second way, of course, is that we know that many trans people are afraid to go into healthcare facilities, and that fear is driven by the fact of people’s past experience with discrimination. I even have had that happen before. And to codify that in the law — even with the existing regulation, as Chase pointed out, people still face discrimination. So that was the case. But to codify that and to expand that means that, again, that with regards to regular healthcare or lifesaving healthcare that’s not related to transition, that trans people would either not be able to access it because of the decision of those healthcare providers or not go in because of that fear that’s based on past discrimination. And all of that’s happening against the backdrop of COVID-19, and so it was particularly cruel in so many ways.

JUAN GONZÁLEZ: Yeah, I wanted to ask Chase if you could talk about — you were one of the attorneys for Aimee Stephens, one of the lead plaintiffs in this case, in this historic case. Could you tell us a little bit about her story, and also the unfortunate fact that she passed before the final court ruling?

CHASE STRANGIO: Yes, and that part of the story is absolutely heartbreaking. Aimee, like many trans people, like me, struggled internally for many years, and ultimately, somewhat later in life, came out as transgender to her family, and really had hope that her employer would accept her as who she is. And she wrote this incredibly beautiful letter to her colleagues and her boss at the Michigan funeral home where she had worked for many years and was a model employee. And she wrote this letter, and she was immediately fired, just because she is transgender. And that was in 2013. So she spent the last seven years of her life fighting this case, fighting for justice, even when many people told her that she had no claim.

And the reality is that Aimee lost her job. She lost her financial security. She lost her health insurance, because we live in a country that ties access to health insurance to employment, which is tragic in and of itself. And her health began to decline as a result of that. So she spent the last seven years of her life not only fighting for the basic dignity of the recognition that what happened to her was wrong, but while she was precariously situated because she did not have financial security, which led directly to her premature death just weeks before the Supreme Court ruled in her favor in this case.

JUAN GONZÁLEZ: Well, let’s go back for a moment to hear Aimee Stephens in her own words.

AIMEE STEPHENS: I’ve been living basically two lives: one at home and in public, and one at work. And in the beginning, that wasn’t so bad. But as time goes on and as time progressed, I got to the point that living two lives, being two people, was becoming downright impossible. And I knew that I couldn’t keep going that way. And things came to a head in November of 2012, when I stood in the backyard with a gun to my chest, pondering the question: If I can’t go forward and I can’t go backwards, where does that leave me? And if this is all I have to look forward to, then what’s the point of continuing? And in that hour, going over that and over that in my mind, I chose life, and I realized that I liked me too much to just disappear and go away.

AMY GOODMAN: That was Aimee Stephens speaking at an ACLU news conference before she died last year in September. 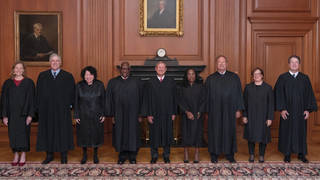