At least 15,000 people marched through Brooklyn Sunday to protest violence against Black transgender people, particularly women, who face disproportionate levels of violence at the hands of police and on the streets. The protest came as two more Black trans women were killed last week, in Ohio and Pennsylvania. They are believed to be at least the 13th and 14th violent deaths of transgender people in the United States this year. We speak with journalist Imara Jones, creator of TransLash, who says the trans rights movement currently has “tremendous visibility” but also faces a “tremendous backlash.”

StoryJun 05, 2019“We’re Left to Defend Ourselves on the Margins”: 8 Black Trans Women Have Been Murdered This Year

AMY GOODMAN: I wanted to turn now to the massive march in Brooklyn that took place Sunday. It brought out at least 15,000 people to the streets to protest violence against Black transgender people, particularly women, who face disproportionate levels of violence at the hands of police and on the streets. Demonstrators wore white and flooded the front of the Brooklyn Museum and surrounding blocks. Journalist and activist Raquel Willis addressed the crowd.

RAQUEL WILLIS: I believe in my power.

CROWD: I believe in my power.

RAQUEL WILLIS: I believe in your power.

CROWD: I believe in your power.

RAQUEL WILLIS: I believe in our power.

CROWD: I believe in our power.

AMY GOODMAN: The protest came as two more Black trans women were killed last week. In Ohio, 25-year-old Riah Milton was shot and killed last Tuesday during a robbery in Liberty Township, according to local authorities. Two people have been arrested and charged with her murder. Milton worked as a home healthcare aide and attended the University of Cincinnati. One day earlier, Dominique “Rem’mie” Fells was found dead in Philadelphia. An investigation is underway. Friends remember her as a social butterfly. Fells was a dancer and artist who hoped to become a fashion designer. The killings are believed to be at least the 13th and 14th violent deaths of transgender people this year. The American Medical Association has declared the killings of trans women of color an epidemic.

For more, we’re going to Imara Jones, who was there on the stage, creator of TransLash, at the Brooklyn protest. Can you talk about the significance of what is taking place right now, also the murder of Tony McDade in Tallahassee?

IMARA JONES: It’s the mash-up of so many different forces right now that are grinding together and, I think, creating this moment of intensity, that both is leading to this ongoing crisis and deaths of Black trans women and also leading more than 50,000 — I’m sorry, 15,000 people out on the streets. These events are together.

And, you know, we have these two forces that are at work right now, where we have tremendous visibility, tremendous realization of the presence of trans people, the need for trans rights, our power, our contributions both now and throughout history, and at the same time a tremendous backlash, that is very real, that is funded, that is coordinated, that is on the march. And these two things are colliding. And that’s the significance of this moment, that we have to hold the reality of both of these things occurring at the same time.

JUAN GONZÁLEZ: Imara, I wonder if you could talk, as well, about the story of Layleen Polanco, the Afro-Latinx transgender woman who was found dead in a jail cell at Rikers Island last June? She was held in solitary confinement. And a new video shows that guards tried to wake her for approximately 90 minutes, before they called for medical assistance.

IMARA JONES: I mean, there are so many things that are tragic about the death of Layleen Polanco, besides the fact that she was a beautiful human being. The tragedy in her case is the fact that she was in jail waiting for a $500 bail. The fact is that her death could have been prevented if Rikers, you know, the worst of the worst prisons, the largest jail in the world, had followed its own rules about monitoring people who had epilepsy, if they had followed their own rules about calling for medical attention, as you mentioned.

And all of this ties to the fact that she was viewed as less than a human being. One of the things that is really clear on the tape is that when guards found her and were taking her body out, that they were laughing, making light of the fact that she had died, making light of her appearance. And that dehumanization is at the core of so much of our mistreatment. And that’s one of the things that we have to be equally focused on overturning. And I think that’s why the clip that you played for Aimee Stephens is so powerful in that, that at the end of the day, regardless of how different we may appear to other people or the way they may or may not understand who we are, that at the end of the day our humanity is equal to theirs, and therefore we deserve to have the same access and be availed of the same rights as everybody else.

AMY GOODMAN: I want to turn to the renowned scholar, activist Angela Davis, speaking on a panel about abolition, hosted by Dream Defenders, Sunday.

ANGELA DAVIS: If we want to develop an intersectional perspective, the trans community is showing us the way. And we can’t only point to — and we need to point to cases such as the murder of Tony McDade, for example. But we have to go beyond that and recognize that we support the trans community precisely because this community has taught us how to challenge that which is totally accepted as normal. And I don’t think we would be where we are today, encouraging ever larger numbers of people to think within an abolitionist frame, had not the trans community taught us that it is possible to effectively challenge that which is considered the very foundation of our sense of normalcy. So if it is possible to challenge the gender binary, then we can certainly effectively resist prisons and jails and police.

AMY GOODMAN: That’s Angela Davis. If you’d like to see our hour with her last Friday, go to democracynow.org, as she talked about defunding police and abolition and Tulsa and so much more. But, Imara Jones, if you can talk about the centering of Black trans lives in the Black Lives Matter movement, in this uprising that’s going on, not only around the United States, but around the world right now?

IMARA JONES: Well, I would say that it’s not yet centered. I think that it is beginning to be centered. And I think that what’s really powerful about what happened on Saturday is that it was the culmination of a lot of knowledge in our community, the fact that even though Black and Brown trans women started the fight for LGBTQ liberation at Stonewall, that we were pushed out of it and have not benefited from the movement that we helped to start. And we are saying that that’s not going to happen, that we understand from history that when we try to — as Dr. Davis was alluding to, when we try to prioritize some rights over others, when we try to prioritize certain groups of people over others, historically, we know that all the rights that are gained that way are fragile, that they don’t last very long.

AMY GOODMAN: Imara Jones, I want to thank you so much for being with us, journalist and founder of TransLash, and Chase Strangio, deputy director for transgender justice with the ACLU’s LGBT & HIV Project.

When we come back, as more monuments celebrating the nation’s racist history are toppled or removed, we’ll speak with Bree Newsome, the woman who five years ago shimmied up a flagpole on the state Capitol grounds in South Carolina and removed the Confederate flag. Stay with us.

AMY GOODMAN: “#StayStrong: A Love Song to Freedom Fighters” by our next guest, Bree Newsome.

Goodbye, Columbus: Bree Newsome Bass on the Movement to Topple Racist Statues Across the Globe

NEXTGoodbye, Columbus: Bree Newsome Bass on the Movement to Topple Racist Statues Across the Globe 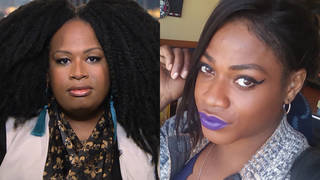