As police officers in nearly 100 U.S. cities and towns have fired tear gas on protesters in recent weeks and left many with severe injuries, a new Amnesty International report finds the use of tear gas continues to grow each year, and fuels police human rights violations against peaceful protesters on a global scale. “Everywhere we look, police are just very quick to use tear gas, which is not a safe product and can cause real injuries,” says Brian Castner, senior crisis adviser on arms and military operations for Amnesty International.

AMY GOODMAN: This is Democracy Now!, democracynow.org, The Quarantine Report. I’m Amy Goodman, with Nermeen Shaikh. At protests against police brutality and racism in recent weeks, nearly a hundred law enforcement agencies used tear gas. That’s according to a new analysis by The New York Times.

This comes as Amnesty International has published a new report called “Tear Gas: An Investigation,” that exposes how the global trade of tear gas is fueling police human rights violations against peaceful protesters on a global scale. They looked at 80 events in 22 countries and territories and found the misuse of tear gas by security forces worldwide has resulted in severe injury and death.

Welcome to Democracy Now!, Brian. If you could lay out for us the global use of tear gas? And then we’ll talk about the United States.

BRIAN CASTNER: Sure. I mean, I think we’ve seen with the protests around the world, especially we saw beginning in the middle of and end of last year, that there were protests all over the world — in Iraq, in Hong Kong and in Latin America — and in many of those cases, tear gas were used by police. And what we saw is just this broad trend, not just that it’s being used, but that it’s being misused, and how quickly it’s being used. And unfortunately, many of the types of incidents, some of the worst misuse that we’ve seen overseas, we’re now seeing in the United States, as well.

And that’s specifically two things. One is using tear gas in confined spaces, where people are trapped, where they can’t get away from the tear gas. We saw this in Hong Kong, of course, but we’ve also seen it in Seattle, and we’ve seen it in Philadelphia in a terrible incident where people were trapped up against a highway embankment and couldn’t get over a fence.

And then, we’ve also seen where tear gas grenades are fired directly at people, are fired directly at their heads. Now, in Iraq, in Baghdad last year, this killed dozens of people. In the U.S., unfortunately, we’ve seen that, as well. Now, it hasn’t killed anyone, but that’s not because of how it’s being misused. It’s because the products are different. In Iraq, they were using a much heavier grenade.

But around the country, I’ve spent the last couple weeks looking at hundreds of videos of incidents all over, and it’s all over the country. It’s not just New York, Seattle, Philadelphia. It’s Murfreesboro, Tennessee, and Iowa City, Iowa, and Albuquerque. And everywhere we look, police are just very quick to use tear gas, which is not a safe product and can cause real injuries.

NERMEEN SHAIKH: Well, Brian, you mentioned the use of tear gas against protesters in Iraq and in Hong Kong. And as you’ve pointed out, tear gas there has been imported from Serbia or Iran, in those particular instances, whereas here in the U.S., most of the tear gas that’s been used against protesters is U.S.-made. Could you talk about the significance of that, and what obstacles that presents for banning its use in the U.S.?

BRIAN CASTNER: Yeah, that’s a really good point. So, in Iraq, in Baghdad, it was Serbian and Iranian grenades that were used. In Hong Kong, it was mostly American weapons, until eventually mainland Chinese weapons were used.

In the United States, there’s a couple major manufacturers of tear gas. They sell domestically. These are largely privately held companies. They don’t have shareholders to report to. They don’t make public the exact ingredients in their tear gas grenades, in many cases. And so there’s a real challenge of transparency. There is no standard for what goes into every one of these products, either a dosage rate of that CS gas itself, the amount of the other chemicals that go into it that help it burn, or silicon, which makes it sticky in the atmosphere.

And I think it’s telling that many of these companies are privately held. I think they realize, on a certain level, you know, that their products really do harm people. And so there have to be layers of nonreporting, basically, to make it palpable. And one of the largest manufacturers in the United States, Safariland, just announced that they were actually divesting themselves of the tear gas business. And this is perhaps a trend that we might see, is that their — I mean, as we see across the country of just how it’s being misused, companies don’t want to be involved in their own product.

NERMEEN SHAIKH: And, Brian, one of the problems, as you’ve pointed out, why we don’t know what exactly tear gas contains is that there are no set international tear gas trade rules. Now, why is that? And is that common with weapons that are deployed by police forces or security forces? And has the use of tear gas been banned outright in any country?

BRIAN CASTNER: Yeah, those are good questions. I mean, tear gas is a weapon. It’s not — let’s not sugarcoat that. But it is a weapon that falls through a lot of the international regulatory cracks. It’s covered by the Chemical Weapons Convention, but only for use in wartime, and there’s very vague language which allows its use in domestic policing, which, for many people, it strikes them as odd: If it’s not OK for use on the battlefield, why would it be OK for police to use against its own citizens? And so, there’s just a real lack of transparency, both in what each of these products contains, where it’s made in various countries, who’s trading it to whom, who’s buying it, in what quantities, etc.

I should say that there is no rule that police have to use tear gas. It’s not an absolutely essential weapon. And some countries, like the United Kingdom and Germany, have effectively banned its use in policing, because they realize that there are now other tools and there’s other better ways for police to engage protesters and engage crowds and make sure that everybody’s safe.

AMY GOODMAN: And especially horrifying now as it’s being used during this time of the pandemic in this country and around the world, which so deeply affects the lungs. But before we go, Brian, we wanted to ask you about a piece you wrote in The New York Times, the use of paintball guns — no, not by kids — this isn’t a game — but by the police, and what it means.

BRIAN CASTNER: Yeah. So, I assisted on a piece for another journalist at The New York Times on that. And police have started to use — effectively, they are — their weapons are very similar to paintball guns, except they’re called pepper balls, is what’s actually fired. And instead of having a little bit of paint inside, it’s either got pepper spray or tear gas. And on one level, this actually could be an advancement for safety, because it hits with less force, and there’s actually less pepper spray or tear gas.

Unfortunately, the way we’ve actually seen it being used across the country the last couple weeks is that instead of speaking to citizens, to protesters, police tend to use or seem to use, in many cases, the pepper balls as a form of communication. Instead of directing people where to go, they shoot at them, or they shoot at the ground near them, to try to get them to move in a certain way. Pepper balls are a use of force like any other use of force. If you wouldn’t just hit someone instead of speaking to them, you shouldn’t be firing pepper balls at them, either.

AMY GOODMAN: Well, we’re going to continue to follow this story, which is absolutely critical. Brian Castner, Amnesty International’s senior crisis adviser on arms and military operations, former Air Force officer who served three tours of duty in the Middle East, two of them in Iraq as the head of an explosive ordnance disposal unit.

When we come back, we go to Seattle, which has just banned tear gas. And we’re going to talk about Trump’s threats to bring in the U.S. military. Stay with us.

AMY GOODMAN: “I Won’t Be Silent” by Stephan Said & The Clarion. As they premiere on Democracy Now!, their new video also debuts today and supports Black Futures Lab and features video and images from protests around the country. 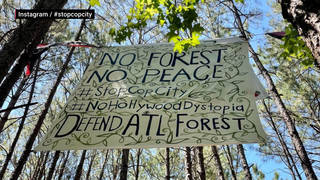