In a story Democracy Now! has followed closely, Juan González shares an update on efforts to prevent the demolition of the Lincoln Annex public school in New Brunswick, New Jersey. City officials are trying to proceed with demolishing the public school this summer, in a move that would force 760 students to be bused to other schools for years, and parents and local activists are holding a rally in front of the Lincoln Annex School. “They want to keep the pressure on in the streets and to call on allies … who support public education, who are against gentrification and the abuse of immigrants, to join the rally,” González says.

AMY GOODMAN: This is Democracy Now! I’m Amy Goodman, joined by my co-host Juan González in New Brunswick, New Jersey, where he has an update on the community’s fight to save the largely immigrant Lincoln Annex public school from demolition to make way for the Robert Wood Johnson hospital’s $750 million cancer center. Juan?

JUAN GONZÁLEZ: Yes, Amy. Well, there is a big rally planned for tomorrow, July 1st, at 4 p.m. in front of the Lincoln Annex School in downtown New Brunswick, right across the street from Robert Wood Johnson hospital.

The city is trying to move forward to sell and demolish this school this summer, and they would force 760 children, most of them Latino, to be bused for at least three years to a converted warehouse on the outskirts of the city just for this expansion.

The protesters are going to march to City Hall, where there’s a scheduled City Council meeting. The parents and the community have been fighting now for months, in the streets and in the courts, to stop this. And there’s actually a pivotal court case, María [Juárez], et al., v. the New Brunswick Board of Education, that will have its first hearing next week, July 7th. And the parents have managed to be able to get four pro bono law firms, including the national civil rights group LatinoJustice, a major Chicago law firm, Locke Lord, and others to work pro bono for them.

But they want to keep the pressure on in the streets and to call on allies from across New Jersey and who support public education, who are against gentrification and the abuse of immigrants, to all join — to join the rally. Larry Hamm from the People’s Organization for Progress of Newark and others will be speaking at the rally. And I’ll be there myself, because, as you know, I’ve been involved for quite a while now with this effort by allies to support the parents of Lincoln Annex School.

AMY GOODMAN: And, of course, we’ll continue to cover this. 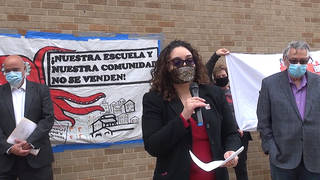