New York police have closed in on peaceful protesters camped outside City Hall who are demanding $1 billion be cut from the police department’s $6 billion budget, as the city approaches its July 1 budget deadline. Mayor Bill de Blasio announced a budget deal that would move $1 billion in NYPD funding in an apparent nod to protesters’ demands, but organizers say they’re not satisfied. “All they’ve really done is shifted money from the NYPD budget over to school safety officers,” says Bianca Cunningham with the #OccupyCityHall encampment, who adds that school safety officers still contribute to a school-to-prison pipeline that disproportionately hurts Black and Brown communities. “It shows that they are completely tone deaf about what this moment is about,” she says.

AMY GOODMAN: We’re going to end today here in New York City, where this morning police officers closed in on peaceful protesters who have been camped outside New York City Hall demanding a billion-dollar cut from the police department’s $6 billion budget. Footage shared by VOCAL-NY and others show police in riot gear violently clearing demonstrators from Chambers Street and arresting at least one person.

We’re going to go right now to this occupation. The occupation remains as the city approaches its July 1st budget deadline. Organizers with the growing grassroots movement say they’re not satisfied with Mayor Bill de Blasio, who Monday announced a budget deal that would move $1 billion in NYPD funding in an apparent nod to protesters’ demands.

MAYOR BILL DE BLASIO: Over this weekend, City Hall, here at City Hall, my office presented to the City Council a plan that would achieve a billion dollars in savings for the NYPD and shift resources to young people, to communities, in a way that would help address a lot of the underlying issues that we know are the cause of so many problems in our society. I am excited to say that we have a plan that can achieve real reform, that can achieve real redistribution, and at the same time ensure that we keep our city safe and we make sure that our officers are on patrol where we need them around the city.

AMY GOODMAN: The proposed budget would move so-called school safety agents, who wear police uniforms and are unarmed, from NYPD to the city’s Department of Education. Some activists call the deal a “betrayal.”

For more, we’re joined by Bianca Cunningham, one of the organizers of the encampment, co-chair of the New York City chapter of Democratic Socialists of America.

Welcome to Democracy Now! It’s great to have you with us, Bianca. What does your mask say? And thanks for wearing it. Talk about the response to what many have cast as de Blasio caving to your demand — remove $1 billion from the $6 billion New York police budget.

BIANCA CUNNINGHAM: Yes. First of all, thank you for having me. My mask says “Stop Killing Black People.” It’s straight to the point. That’s why we’re all out here.

We’re very upset with the fact that Mayor de Blasio and the speaker of the City Council, Corey Johnson, are attempting to parade this as a victory, when really all they’ve really done is shifted money from the NYPD budget over to school safety officers. It shows that they’re completely tone deaf about what this moment is about.

We know that school safety officers contribute to the school-to-prison pipeline and that kids are saying, overwhelmingly, students all over the city are saying, metal detectors don’t keep them safe, that having police officers in school don’t make them feel safe. In fact, they make them feel like criminals. So the fact that they’re parading this as a victory, by increasing police presence in schools, is really upsetting in this moment.

JUAN GONZÁLEZ: And, Bianca, this whole issue of how the police department grew into such an octopus? Back in the Giuliani days, they first merged the transit police and the housing police, and then they merged the school safety officers into the police department. So this is like beginning to go back to where it was years ago, but without dealing with the actual issue of the number of police, that have remained largely increased, even as crime decreased throughout the last 20 years. This whole issue of how the City Council and the mayor still refuse to deal, that there’s too many uniformed police in New York City?

BIANCA CUNNINGHAM: Yeah, there’s too many uniformed police in New York City. And furthermore, when we talk about defunding the NYPD, the other part of that is to fully fund social services. I can tell you, out in the encampment, it’s obvious. We have some of the most vulnerable members of our community coming out to have their voices heard and participate in this encampment, and it’s clear that what they’re saying they need is services — mental health services, social services, adequate housing, affordable healthcare, a quality education. These are the things that the community is crying out for. And so it’s not good enough to move money around in fancy accounting tricks. It’s not good enough to just defund the NYPD even. We have to meet that with services that are fully funded, as well.

JUAN GONZÁLEZ: Could you talk about the occupation around City Hall and the impact it has had on the Council and on the public discussion around this issue?

BIANCA CUNNINGHAM: Sure. So, a group of us called this action and this encampment in an attempt to put pressure on the City Council to meet our demand of $1 billion. The response has been, frankly, embarrassing, in my opinion. They’ve called us out on Twitter for — saying that, you know, they’re good progressives and that they should be exempt from the accountability that the people are looking to hold these electeds to. They’re having press conferences outside of activists’ house to try to play race cards and other identity-based games about who is allowed to protest, you know, who’s allowed to protest and call for the defunding of the NYPD and who’s not. They’ve been completely irresponsive to all of our calls, only getting upset and almost threatening to withhold their “no” vote on a budget if we continue to target them. It’s a real shame, what’s going on. It’s a real shame that they lack the accountability to their constituents. And it’s a real shame that even in this moment, when it’s so clear to so many of us about what the right thing is to do, they don’t have the moral courage to stand up and do it.

AMY GOODMAN: So, Bianca Cunningham, as you sit there at City Hall talking to us, masked to protect the community, what is happening today? Can you talk about the vote and what you’re demanding further? Are you able to go in and out of City Hall? Are you able to speak with city councilmembers? Who is supporting you within the government and in the greater community? You started with just a hundred people there.

But I will say, you know, we know the symbolic — this is symbolism — right? — that we are encamped in City Hall. Nobody’s there, because of COVID. Everybody’s at their house. And normally, what protocol would be, today — they’re meeting at 11:00 — they would need to come into City Hall to cast a vote. Well, instead, they’ve changed the procedure to say that they can now vote virtually through Zoom. And so that vote will be taking place all day. So they’re making it super hard to hold them accountable. They don’t want to face the public. They’re hiding inside their houses. And they’re on Twitter threatening us to say that we shouldn’t be talking against the establishment.

So, I feel like, you know, we are having an impact, I would say. You know, we have — if you walk inside the encampment, we have a people’s library, where people can go get educated on capitalism and racial capitalism and racism. We have a people’s bodega, where you don’t have to leave, and you have, like, PPE and sanitary items and things that you need. We have a fully stocked food table, where we’ve been having donations outpouring from New Yorkers and even people from the U.K., from California, from all over the country, trying to find out how they can send us food. We have blankets and clothes and shoes, and we’re really taking care of the homeless.

I could just share really quick, yesterday a young woman came up to me. It was her first night in the encampment, and she described to me that this is what she felt like community should feel like. She said, “I’ve never felt more cared for. I’ve never felt more taken care of. I’ve never felt more safe.” And so, we are trying to model in real life what it looks like to keep each other safe without the police present. And that includes having to navigate a number of issues with the homeless folks, with people with mental health issues, but still not calling the police, and using mediation, mental health services and other professionals to deescalate situations.

JUAN GONZÁLEZ: And, Bianca, we only have about 30 seconds, but I wanted to ask you: What do you see as the next steps? The City Council must vote to approve a budget by June 30th, which is today, so, hopefully, for the new fiscal year that starts July 1. What do you expect to happen after their vote, with the movement you’ve started?

BIANCA CUNNINGHAM: You know, it’s hard to say. Right now all of our focus is on trying to target the councilmembers, to say that “Please withhold your vote on this budget, if it doesn’t — we know that it doesn’t include the demand that we want, so can we vote no? And can you create your own budget?” They have the right — I mean, you know, it’s within their right to do so. It would be messy, but it definitely is possible.

Further than that, I would say to Speaker Cory Johnson, who is looking to run for mayor, “Don’t even bother. If you can’t stand up and be our leader in this political moment, then don’t even bother to try to be mayor later, because we’ll remember where you stood today.”

AMY GOODMAN: Do you plan on continuing the encampment tonight, beyond the vote, Bianca?

AMY GOODMAN: Bianca Cunningham, thanks so much for joining us, organizer of Occupy City Hall, former co-chair of the NYC chapter of the Democratic Socialists of America, speaking to us from New York City Hall.

And that does that does it for our broadcast. A very Happy Birthday to Isis Phillips! And remember: Wear that mask. You should wear it because you care. 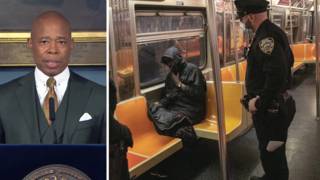