We go to Minneapolis, where the community has taken over a Sheraton hotel to provide shelter to more than 200 unhoused people amid protests and the pandemic. Now they face eviction. “Using hotels for emergency housing is an obvious answer,” says Rosemary Fister, community organizer. “They are largely vacant as we enter an economic depression in the midst of a global pandemic.”

AMY GOODMAN: This is Democracy Now! I’m Amy Goodman, with Juan González. This is The Quarantine Report, as we go to Minneapolis, where more than 200 unhoused people are facing imminent eviction from a former Sheraton hotel that community organizers turned into a sanctuary for homeless people amidst citywide protests against the police killing of George Floyd. As parts of the city erupted in flames, thousands took to the streets in protest, unhoused people seeking refuge first moved off the streets and into the largely vacant hotel on May 29th. The hotel’s occupancy quickly grew to more than 200, with a group of volunteers and organizers working around the clock to keep the operation running. The Sheraton is just one mile from where George Floyd was killed by Minneapolis police more than two weeks ago. The hotel has provided shelter for a homeless population hit not just by citywide unrest, but also the coronavirus, which particularly threatens the unhoused. But now the former Sheraton’s owner is threatening to evict all 200 people from the hotel today.

As the situation unfolds, we go to that Sheraton in Minneapolis, where we’re joined by Rosemary Fister, a public health nurse, outreach worker, community organizer, who’s been one of the volunteers on the ground keeping the hotel for the unhoused running.

Welcome to Democracy Now! Can you talk about — in fact, when we booked this segment, we were just going to talk about this amazing place that is being run by the unhoused and the organizers, like you, Rosemary. But now, as we go to air, we hear you’re being evicted. Is this true? Talk about what you’ve created over these last 10 days.

And today, it’s clear that our time at this hotel is over. We were able to open the door to a space. We were able to house people through a crisis. We opened a door and demonstrated some possibilities. This is the time for the city, for the state, for the county, for the nonprofits, for the philanthropists to step in. We demonstrated the clear need. We housed well over 200 people. As of this morning, we had 427 people on the wait list. Not only was the owner threatening us with eviction yesterday, but there is also an emergency this morning that’s still unfolding and I can’t really speak to right now. We’re still trying to find out what is happening. But it’s very clear right now that the space that we’ve created for the last 10 days is no longer an option. And there is nowhere for people to go.

JUAN GONZÁLEZ: And, Rosemary, many of the homeless who are in the hotel were in an encampment near the Minneapolis police precinct that ended up being burned down as a result during the protests. Could you talk about this — what did the hotel owner do initially? Did he just walk away from the hotel? What happened? And talk about the interaction between the owner and the people who are there now.

ROSEMARY FISTER: Yeah, that’s been an interesting and ever-changing relationship. Just for context, we’ve had a massive increase in homelessness driven by unsheltered homelessness in the Twin Cities. There is no room in the shelters. We call every night to see if there are shelter beds, and the shelter beds are generally full by 9:00 in the morning. This has been a crisis. This has been a failed system. And we had no other choice than to try to find some kind of space while the curfew was descending and the National Guard was invading our city. There was nowhere for people to go. We had no choice.

It was a very interesting kind of dynamic. We later learned that he had been operating without a license, working with the hotel workers’ union, UNITE HERE, and understanding more of the dynamics behind the issues behind that situation. And he has got some significant other history that we’re still trying to find out how to address.

He started threatening us with eviction, calling the police yesterday. And issues with the hotel keys being deactivated, people getting locked out of their rooms, really just creating kind of a sense of uncertainty, precarity and chaos, that we were trying so hard to provide sanctuary to. So, at the prompt of the owner —

JUAN GONZÁLEZ: And, Rosemary, I wanted to ask you, because we only have about a minute left, but if you could talk about the connection to George Floyd to many of the residents in the hotel?

JUAN GONZÁLEZ: He actually worked for a time in one of the city’s major homeless shelters, and many of the residents there knew him. Could you talk about that, as well?

ROSEMARY FISTER: Yeah. George Floyd was a shelter worker. He worked at the largest shelter in town for about three years. A number of the people that were staying in the Sheraton, or the former Sheraton, knew him. There is a resident here that was present when he was murdered by the police.

And George Floyd is the person that gave us the power to make these opportunities happen. We have to — we have an obligation to create the world that we want to live in. We’ve been seeing that it’s a possibility. It took burning down a police station to convince the county that we needed to open up some more options, and it still wasn’t enough. It’s clear that people still have nowhere to go. It is clear that the crisis is much larger than anything that’s been measured.

And right now we are at a crisis point. We are calling upon the state, the county, the city, the nonprofits, the entire system to step in. These people have nowhere to go now. This is a dangerous situation. It’s been a dangerous situation. People are dying much younger than they should be. They were already facing epidemic infectious disease prior to the COVID-19 pandemic. They were already facing epidemic overdose deaths, with massive racial disparities, Native people being 20 times more likely to be homeless than white Minnesotans. People who are indigenous to this land should have a place to live.

AMY GOODMAN: Rosemary, we have to go, but if people want to find out more about what’s happening there, is there a website you can send people to?

ROSEMARY FISTER: And we’ll be posting some updates there later today.

AMY GOODMAN: Thank you so much, Rosemary Fister, public health nurse, outreach worker, community organizer, working in Minneapolis with people experiencing homelessness. We’ll keep people updated. Will they be evicted from this former Sheraton Hotel, or will there be some kind of compromise reached? 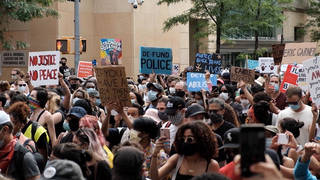