As New York City begins to partially reopen, we look at what it means for the nation’s largest public transportation system. “It’s a very stressful and dangerous situation,” says Seth Rosenberg, a subway operator, shop steward with the Transport Workers Union Local 100 and a member of a small coalition of transit workers called Local 100 Fightback. “The safety measures are not in place to protect transit workers or riders.”

AMY GOODMAN: This is Democracy Now! I’m Amy Goodman, with Juan González. New York City is known as a mass transit city, where millions take subways and buses and trains to work every day. But that changed when it became the epicenter of the pandemic. This week, New York City enters Phase 1 of reopening amidst the coronavirus. Officials announced their plan to keep workers and riders safe during a press conference Friday in the empty terminal of Grand Central Station. This is Patrick Foye, head of the Metropolitan [Transportation] Authority, or MTA.

PATRICK FOYE: Secondly, we will continue our unprecedented cleaning and disinfecting program. Third, face coverings and masks are mandatory at all time for all customers and employees. Four, we’re enhancing safety and security by increasing the presence of NYPD, MTA Police and other personnel systemwide. Fifth, our nation-leading employee safety initiatives will continue. The Temperature Brigade will continue testing workers for fevers. Rear-door boarding will remain in place on buses at this time. And we’ve installed hundreds of plastic barriers at employee workplaces across the system. Six, we’re exploring innovative cleaning suggestion with pilots already underway, testing the use of ultraviolet light, antimicrobials and electrostatic applicators for disinfecting purposes.

AMY GOODMAN: Since the pandemic began, more than 130 New York City transit workers have died of COVID-19. Nearly 10,000 have returned to work after being out because of the coronavirus. Train operators, conductors have reported the most infections.

Seth, welcome to Democracy Now! Just describe the condition of the subways as more and more people take them. What’s happening? What are you doing inside the subways, and what’s happening to the workers inside?

SETH ROSENBERG: Yeah, thanks for having me on the show, Amy. Hello to everyone.

Yeah, certainly, the trains are getting more crowded as the pandemic restrictions are lifted and so forth. And, you know, given the MTA’s horrible track record with respect to safety for us — the numbers you stated are horrific — I’d say it’s a very stressful and dangerous situation.

The safety measures are not in place to protect transit workers or riders, and so — you know, in a number of ways that I could discuss. And so, you know, transit workers have been — some of us have been trying to push back to try and figure out ways to keep things safe ourself. Right now there’s no filtration system. The air in our cabs that we work in for hours comes from the cars. And mask enforcement for riders is spotty. Most people in New York are good people, and they wear them, but, really, there’s no way to enforce it. So, you know, I’ve had co-workers who have had people coughing, sitting behind them for half an hour, operating the train, and there’s nothing they can do. They’ve been quite scared. And so, I’d say it’s a mess right now.

JUAN GONZÁLEZ: And, Seth, I wanted to ask you particularly about the mask situation. Now the governor, with his executive order, and the MTA saying everyone should wear a mask, this is obviously the opposite of what was being said early on in the pandemic, when all the officials were saying, no, masks are not necessary. But now we realize that the wearing of masks is probably one of the most important ingredients to being able —

JUAN GONZÁLEZ: — to guard against the pandemic. What about the workers? How many masks are you actually getting now, since you’re going to be in the subways all the time?

SETH ROSENBERG: Yeah. Let me say a little bit about the history behind that first. You know, the MTA had a pandemic plan from 2012 that was supposed to stockpile PPE and then distribute it, and a number of other social distancing and sanitizing measures. And it really just was not put into effect.

With respect to the masks, they hide behind the CDC, saying, “Well, they changed their instructions.” But the fact is that transit workers, early, you know, in March, were clamoring for masks, saying, “We need masks. We’re exposed. We’re unsafe.” And the Transit Authority actually — their policy, early on, was that they said that we would be disciplined if we wore our own masks, and that we couldn’t have masks because it would worry the public. And unfortunately, a number of people higher up in our union went along with that, as well.

And we see the results from that, right? Massive infection, deaths among transit workers — you know, Amy quoted it’s like around 140. The numbers are staggering. And just to say, it’s not just masks, though. They failed on sanitation, on social distancing. When I got back to work, at late April, I had to push for social distancing measures in my workplace. But yeah, so, you know, the Transit Authority is always playing catch-up.

And now with masks, we get — right now policy is that we get two N95 masks a week. And I’ve done a lot of research on this. I have a strong science background. And, you know, there are ways to reuse N95 masks, but the Transit Authority does not have a policy in place. Like, they want us to clean them off with sanitizing wipes or something like that. It’s just, that’s not a safe measure, right? And so, you see this flip-around from no masks to masks, being reactive instead of proactive, and then, even when they do, they’re really — you know, they won’t give us what’s really needed, if they don’t have a coherent disinfectant policy for the masks, which we really should have one per day, because they’re disposable masks.

JUAN GONZÁLEZ: And I wanted to ask you about the distancing issue. Mayor de Blasio has recommended that the subways have a policy of every other seat being empty. But the MTA itself, which obviously is controlled by the governor, has said, no, that that’s not practical, it wouldn’t work. You mentioned your union. Your union has always been pretty close to the governor in terms of being able to exact from the governor better contracts, from their perspective. What about the responsibility of union leaders in this whole issue of public health?

SETH ROSENBERG: Yeah, I mean, unfortunately, I think what we’ve seen here is that it’s gone — it’s certainly has gone the other way. I might argue that the relationship has really been not effective for our union members for a long time, if ever. But with respect to this, during the early days of the crisis, we were really in free fall. The MTA didn’t care about our lives and was willing to sacrifice us to keep service going, and the union went right along with it. When Cuomo gave the marching orders of, you know, “We’ve got to keep service going,” our union was very quiet with respect — and as deaths mounted up, there wasn’t any effective push on the ground to stop unsafe work or to demand things and say trains aren’t and buses aren’t going to run until our workers are kept safe.

With respect to the social distancing, you know, I think it’s — I mean, anyone who’s ridden the subway for a period of time knows that with respect to riders, it’s completely untenable. You know, as things get more crowded — and I think the transit system wants it to — the trains are just going to start to get packed. An issue that’s —

AMY GOODMAN: Seth, I wanted to —

SETH ROSENBERG: One thing I —

SETH ROSENBERG: Just quickly, that, you know, transit workers don’t have any social distancing on the trains. We’re in our cabs. The air gets through from the cabins to us. If you look at other systems, like D.C. Metro or New Jersey PATH, Philly SEPTA, they’ve closed off the cars in which the crew operates. And Transit just refuses to do that. And I think, at this late stage in the game, after so many deaths, it’s just indicative of how they consider us to be sacrificial. They consider our labor to be essential, but our lives to be expendable.

AMY GOODMAN: So, following up on these measures to supposedly protect everyone, the MTA’s 13-point plan says wear a mask. Governor Cuomo tweeted Monday, “Remember: If you’re riding, you MUST wear a mask.” But what is the enforcement mechanism here? Also, the city has shut down the subway from 1:00 to 5:00 every night, first time in what? Over a century. The significance of this? Are they cleaning the subways? And your final comments?

SETH ROSENBERG: Yeah, a lot to say about that. With respect to — there’s no enforcement mechanism. Every day I worked last week — right? — I and a couple of other workers tried to create some social distancing space by putting up some tape, like is done officially in the London Underground. You can see pictures of that. But the MTA refuses to do anything. When they told us we couldn’t do that, every day since, I’ve had people riding near me without masks. Sometimes I ask them politely to put masks on, but there’s really no enforcement. And so, the possibility of transmission if there’s another flare-up is serious.

With respect to the shutdown, you know, I think they are doing some cleaning, but the fact is, they’re running the trains as normal, just without people on them. And with respect to — you know, the homeless are an issue in the subways. I’m a strong advocate for the homeless. We demanded a plan where the system would shut down for a week or two, and the homeless be given hotel rooms that aren’t being used, and things of that nature, and get the services that they need, which is really the worst of all worlds with respect to this, because they can’t do the type of cleaning they need while the trains keep running. And the homeless are pushed out into the neighborhoods at the end of the line and then come back in without being given the real services they need.

AMY GOODMAN: Well, Seth, I want to thank you very much for being with us, subway operator with New York City Transit for 14 years, shop steward with [Transport] Workers Union Local 100, member of a small coalition of transit workers called Local 100 Fightback. And we’ll continue to monitor the situation as the lockdown lifts very slowly here in New York City. 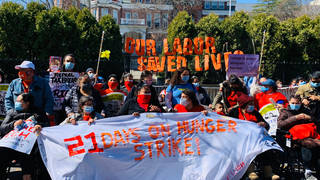