As COVID-19 cases soar in the U.S. South and Southwest, we go to the hot spot of Arizona, where 88% of ICU beds are full and the family of one man accuses Arizona Governor Ducey and President Trump of being directly responsible for his death, after they downplayed the threat of the virus and obstructed local officials from requiring masks even as Arizona’s case numbers were exploding. “We have been in a state of crisis since Governor Ducey decided to hastily reopen the state,” says Tucson Mayor Regina Romero, who has been standing up to Ducey and is the first Latina and the first woman to be elected mayor of Tucson, and the daughter of migrant farmworkers.

AMY GOODMAN: This is Democracy Now! I’m Amy Goodman, with Juan González. This is The Quarantine Report. As COVID-19 cases soar in the Southern and Southwest United States, we go to the hot spot of Arizona, which reported more than 128,000 infections Tuesday. Nearly 90% of Arizona’s ICU beds are full.

Republican Governor Doug Ducey faces widespread outrage for downplaying the virus and even obstructing local officials from requiring masks in June as case numbers began to explode. Ducey has reversed course and allowed mayors to issue their own virus guidelines, under growing pressure, but he resisted calls to pass a statewide mask mandate or reimpose his stay-at-home order, which expired in May with little restriction on the state’s reopening. Facing rising numbers in June, Ducey ordered bars and gyms to close again.

But Arizona residents say the actions are too little, too late. The family of a 65-year-old Mexican American man who died of COVID-19 in Phoenix is accusing Arizona state officials of being directly responsible for his death. In a scathing obituary in The Arizona Republic, the family of Mark Anthony Urquiza wrote, quote, “His death is due to the carelessness of the politicians who continue to jeopardize the health of brown bodies through a clear lack of leadership, refusal to acknowledge the severity of this crisis, and inability and unwillingness to give clear and decisive direction on how to minimize risk.” This is Urquiza’s daughter, Kristin, at an interview with The Arizona Republic.

KRISTIN URQUIZA: Governor Ducey’s got blood on his hands. He was late to close down the state. He was early to open it. And the manner in which he opened, allowing things to go back as normal, is, in my opinion, the reason why my dad is being buried today.

AMY GOODMAN: Well, for more, we’re going to Tucson to speak with a local leader who’s been standing up to Governor Doug Ducey. That’s Mayor Regina Romero. She is the first Latina and the first woman to be elected mayor of Tucson. She was previously a Tucson city councilmember for over a decade, the daughter of migrant workers.

We welcome you to Democracy Now!, Mayor Romero. Your thoughts on Governor Ducey’s responsibility? What do you want to see the state of Arizona do? And what are you doing in Tucson?

MAYOR REGINA ROMERO: Good morning, Amy and Juan. Thank you so much for having me this morning.

We have been in a state of crisis since Governor Ducey decided to hastily reopen the state. We were in a very good place, coming to a plateau. Here in the city of Tucson, we’re located in Pima County. In Pima County, we were seeing 20, 24 cases a day. It was a plateau. Now we are seeing almost 300 cases a day in Pima County. In a county of a million people, we are — we see anywhere from five to 20 ICU beds, which is very, very concerning and straining our doctors and nurses at our hospitals.

We jumped up in front of Governor Ducey — a few mayors, Mayor Gallego from Phoenix, Mayor Evans from Flagstaff and myself — jumped ahead of the governor to call the stay-at-home orders and to close down bars back in March. He took our cue a few days later, and with his executive order, he tied the hands of mayors in cities and towns, and county health departments throughout the state, by preempting us from doing anything that he wouldn’t do. Most recently, he untied the hands of mayors in counties throughout the state to do mandatory mask ordinances throughout the state. But what we have been seeing with Governor Ducey is a microcosm of what has been happening with Trump in his federal response to this pandemic, which is tepid, a tepid response, a pushback on science and what public health officials recommend that we do. Every day that Governor Ducey waits, we see 3,000 cases in Arizona, and the crisis continues, more lives lost.

And so, what we have been doing here in Tucson is basically pushing the governor to do the right thing, because it’s a very real threat. If we do move ahead in front of him, the state Legislature — the Republican-controlled state Legislature passed a bill about three years ago, 1487, that if any city does anything, any law that preempts the state, that our state-shared revenue could be pulled from us. And those are millions and millions of dollars that we could potentially lose. And so, in this crisis, we see ourselves, as mayors, in fear, in fear for the lives of our communities, in fear for the inability for us to be able to do anything. So, what mayors across Arizona and I have been doing is publicly pressuring the governor to do the right thing. The one thing that he could do that could help is do — is institute a mandatory mask executive order statewide, and he refuses to even do that.

JUAN GONZÁLEZ: Mayor Romero, what’s the testing situation in Tucson and Pima County? Are people able to get testing? How long does it take to get the results back? And what kind of tracing, contact tracing, is going on?

We do not see the help of the governor from the state or of the federal government. In Maricopa County, the mayor, Mayor Kate Gallego, had to pressure publicly the governor and FEMA, the federal government, to institute additional testing sites. Here in Pima County, we have — we have none. We have no state or federal help. I know that the governor has been working with nonprofit healthcare providers in terms of testing here in Pima County, and Pima County Health Department has been providing it, but we need much more. We need federal help so that we could test.

The one thing — the two things that we need to do, according to health officials, is testing and contact tracing, and then isolation opportunities for those that are positive. And so, we don’t have enough federal help. Governor Ducey has not communicated with me or Mayor Gallego from Phoenix, the two biggest cities in Arizona, and so we don’t — we really are in the dark as to what type of help we can get here in Pima County, in the city of Tucson, and throughout the state. It is really concerning that even in terms of communicating with us, there’s absence there, and there’s unwillingness to [inaudible].

JUAN GONZÁLEZ: I wanted to — I wanted to ask you about the situation with housing. As many as 74,000 Pima County residents could be at risk of losing their homes because the moratorium on evictions that Governor Ducey had put into place expires next week, July 22nd. What can you do, if that is not extended? And what is the situation, the potential homelessness occurring in your city?

MAYOR REGINA ROMERO: What mayor and council here in the city of Tucson did was use some of those federal CARES Act moneys to put into rental and utility assistance. We used $5 million of the $95 million that we received to help families with rent assistance. But we’re going to need more.

And so, one of the issues that I’ve asked Governor Ducey to consider is that he extend that moratorium 'til the end — at least ’til the end of the year, so that we don't see families losing their home, and therefore aggravate the issue of the virus, of COVID-19 spreading throughout Arizona even worse. And so, here in Tucson, we’re dedicating CARES Act funds to help families. And I’m asking the governor to extend his moratorium so that it is a statewide moratorium to help families statewide, because if we lose — if families lose their homes in a border town like Nogales, you know, they will travel to Tucson. And so, we will see people traveling from town to town to try and find help, and we will see that continued spread of COVID-19.

AMY GOODMAN: Mayor, do you agree that Governor Ducey has blood on his hands, as the daughter of the Mexican American COVID victim expressed?

And right now, at this point, we need the leader of our state to do statewide action, institute statewide action. One of the easiest steps that he can take is institute a mandatory face covering throughout the state. He can — and the mayors have told him that we will support him if he decides to recall his stay-at-home order, that we will stand behind him.

It is a point of crisis right now in the state of Arizona. We’re not only a hot spot in the nation, we’re a hot spot in the world. So we need him to take a swift action, so that we can bend this curve downwards and then move forward together. And what he —

AMY GOODMAN: And finally, the link you see between what’s happened with COVID-19, the effect on Black and Brown populations, and also the issue of police brutality? You hung a Black Lives Matter banner on Tucson City Hall. We just have, oh, 20 seconds.

MAYOR REGINA ROMERO: We are seeing Mexican Americans, Brown and Black and Native American folk here in Arizona receive the biggest brunt of this disease. And so, that points to issues in healthcare, in not just Arizona, but our country. And so, we see the brunt of COVID-19 here in Arizona. It points to inequities in healthcare delivery to people of color. And we have to — for me, it’s important that we state — that we state the truth — right? — that we speak truth to power.

AMY GOODMAN: We have to leave it there. Mayor Romero, we thank you so much for being with us. I’m Amy Goodman, with Juan González. 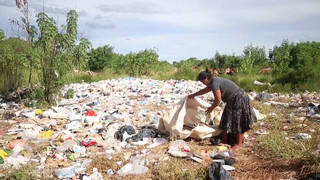