The Case Against Trump Is “Open and Shut”: Kamala Harris Slams President’s Handling of Pandemic

As Kamala Harris, the first woman of color on a major presidential ticket, hits the campaign trail with Joe Biden for the first time, we play an extended excerpt of her address, in which she blasts President Trump’s handling of the economy, immigration, racial justice and the coronavirus pandemic. “The case against Donald Trump and Mike Pence is open and shut,” Harris says. “Just look where they’ve gotten us: more than 16 million out of work; millions of kids who cannot go back to school; a crisis of poverty, of homelessness, afflicting Black, Brown and Indigenous people the most.”

AMY GOODMAN: Former Vice President Joe Biden and Senator Kamala Harris appeared together for the first time as running mates on a historic Democratic Party ticket Wednesday afternoon in a local high school gym in Wilmington, Delaware. They walked in together wearing masks to the Curtis Mayfield song “Move On Up.” Biden introduced his newly announced running mate to a small group of socially distanced reporters.

JOE BIDEN: I have no doubt that I picked the right person to join me as the next vice president of the United States of America. And that’s Senator Kamala Harris. … And this morning, all across the nation, little girls woke up, especially little Black and Brown girls, who so often feel overlooked and undervalued in their communities, but today — today — just maybe, they’re seeing themselves for the first time in a new way: as the stuff of president and vice presidents.

AMY GOODMAN: Former Vice President Joe Biden then turned the floor over to Senator Kamala Harris, the daughter of immigrants from India and Jamaica, and the first woman of color on a major party presidential ticket.

SEN. KAMALA HARRIS: My mother and father, they came from opposite sides of the world to arrive in America, one from India and the other from Jamaica, in search of a world-class education. But what brought them together was the civil rights movement of the 1960s. And that’s how they met, as students in the streets of Oakland marching and shouting for this thing called justice, in a struggle that continues today. And I was part of it. My parents would bring me to protests strapped tightly in my stroller. And my mother, Shyamala, raised my sister Maya and me to believe that it was up to us and to every generation of Americans to keep on marching. She’d tell us, “Don’t sit around and complain about things. Do something.” So I did something. I devoted my life to making real the words carved in the United States Supreme Court: “equal justice under law.” …

The case against Donald Trump and Mike Pence is open and shut. Just look where they’ve gotten us: more than 16 million out of work; millions of kids who cannot go back to school; a crisis of poverty, of homelessness, afflicting Black, Brown and Indigenous people the most; a crisis of hunger, afflicting one in five mothers, who have children that are hungry; and, tragically, more than 165,000 lives that have been cut short, many with loved ones who never got the chance to say goodbye.

It didn’t have to be this way. Six years ago, in fact, we had a different health crisis. It was called Ebola. And we all remember that pandemic. But you know what happened then? Barack Obama and Joe Biden did their job. Only two people in the United States died. Two. That is what’s called leadership.

But compare that to the moment we find ourselves in now. When other countries are following the science, Trump pushed miracle cures he saw on Fox News. While other countries were flattening the curve, he said the virus would just, poof, go away, quote, “like a miracle.”

So, when other countries opened back up for business, what did we do? We had to shut down again. This virus has impacted almost every country, but there’s a reason it has hit America worse than any other advanced nation. It’s because of Trump’s failure to take it seriously from the start, his refusal to get testing up and running, his flip-flopping on social distancing and wearing masks, his delusional belief that he knows better than the experts. All of that is reason, and the reason that an American dies of COVID-19 every 80 seconds. It’s why countless businesses have had to shut their doors for good.

It’s why there is complete chaos over when and how to reopen our schools. Mothers and fathers are confused and uncertain and angry about child care and the safety of their kids at school, whether they’ll be in danger if they go, or fall behind if they don’t.

Trump is also the reason millions of Americans are now unemployed. He inherited the longest economic expansion in history from Barack Obama and Joe Biden. And then, like everything else he inherited, he ran it straight into the ground. Because of Trump’s failures of leadership, our economy has taken one of the biggest hits out of all the major industrialized nations, with an unemployment rate that has tripled as of today.

This is what happens when we elect a guy who just isn’t up for the job. Our country ends up in tatters. And so does our reputation around the world. …

I’ll admit, over the past four years, there have been moments when I have truly worried about our future. But whenever I think that there is a reason for doubt, whenever I’ve had my own doubts, I think of you, the American people — the doctors and nurses and frontline workers, who are risking your lives to save others; the truck drivers and the workers in grocery stores, in factories, in farms, working there, putting your own safety on the line to help us get through this pandemic; the women and students taking to the streets in unprecedented numbers; the DREAMers and immigrants, who know that families belong together; the LGBTQ Americans, who know that love is love; people of every age and color and creed who are finally declaring, in one voice, that, yes, Black lives matter.

All across this country, a whole new generation of children is growing up hearing the cries for justice and the chants of hope, on which I was raised, some strapped into strollers of their own. And trust me, it’s a song you’ll never forget.

AMY GOODMAN: That’s Senator Kamala Harris, making her first address as the vice-presidential candidate on a historic Democratic ticket. In our next segment, we’ll look at her record as, well, her own description, California’s “top cop,” when she was California’s attorney general and, before that, district attorney of San Francisco. Stay with us.

NEXTWas Kamala Harris a Progressive Prosecutor? A Look at Her Time as a DA & California Attorney General 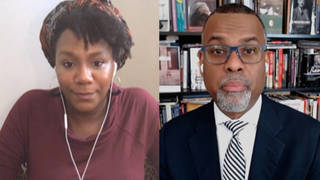