We air highlights from Joe Biden’s highly anticipated speech on the final night of the Democratic National Convention, in which he formally accepted the Democratic presidential nomination, focused on the dangers of President Trump’s reelection and pledged to address the four simultaneous crises of systemic racism, the pandemic, the economic downturn and the climate crisis. “United, we can and will overcome this season of darkness in America,” Biden said. The 25-minute speech was delivered from his home state of Delaware.

StoryAug 18, 2020“His Only Preexisting Condition Was Trusting Trump”: Daughter Speaks at DNC After Dad Dies of COVID

Ella Baker, a giant of the civil rights movement, left us with this wisdom: “Give people light and they will find a way.” Give people light. Those are words for our time. The current president has cloaked America in darkness for much too long — too much anger, too much fear, too much division. Here and now, I give you my word: If you entrust me with the presidency, I will draw on the best of us, not the worst. I’ll be an ally of the light, not the darkness.

It’s time for us, for We the People, to come together. And make no mistake: United, we can and will overcome this season of darkness in America. We’ll choose hope over fear, facts over fiction, fairness over privilege.

I’m a proud Democrat. And I’ll be proud to carry the banner of our party into the general election. So, it’s with great honor and humility I accept this nomination for president of the United States of America.

But while I’ll be a Democratic candidate, I will be an American president. I’ll work hard for those who didn’t support me, as hard for them as I did for those who did vote for me. That’s the job of a president, to represent all of us, not just our base or our party. This is not a partisan moment. This must be an American moment. It’s a moment that calls for hope and light and love — hope for our future, light to see our way forward, and love for one another.

Now nearly a century ago, Franklin Roosevelt pledged a New Deal in a time of massive unemployment, uncertainty and fear. Stricken by disease, stricken by a virus, FDR insisted that he would recover and prevail, and he believed America could, as well. And he did. And we can, as well.

This campaign isn’t just about winning votes. It’s about winning the heart and, yes, the soul of America — winning it for the generous among us, not the selfish; winning it for the workers who keep this country going, not just the privileged few at the top; winning it for those communities who have known the injustice of a knee on the neck, for all the young people who have known only America being of — in rising inequity and shrinking opportunity. They deserve to experience America’s promise. They deserve to experience it in full.

You know, no generation ever knows what history will ask of it. All we can ever know is whether we’re ready when that moment arrives. And now history has delivered us to one of the most difficult moments America has ever faced — four – four historic crises, all at the same time, a perfect storm: the worst pandemic in over a hundred years, the worst economic crisis since the Great Depression, the most compelling call for racial justice since the ’60s, and the undeniable realities and just the accelerating threats of climate change.

So, the question for us is simple: Are we ready?

I believe we are. We must be.

You know, all elections are important. But we know in our bones this one is more consequential. As many have said, America is at an inflection point, a time of real peril, but also of extraordinary possibilities. We can choose a path in becoming angrier, less hopeful, more divided, a path of shadow and suspicion, or — or we can choose a different path and, together, take this chance to heal, to reform, to unite, a path of hope and light. This is a life-changing election. This will determine what America’s going to look like for a long, long time.

AMY GOODMAN: Joe Biden ended his acceptance address describing this election as a “battle for the soul of the nation.”

History says, Don’t hope
On this side of the grave.
But then, once in a lifetime
The longed-for tidal wave
Of justice can rise up
And hope and history rhyme.

This is our moment. This is our mission. May history be able to say that the end of this chapter of American darkness began here tonight, as love and hope and light joined in the battle for the soul of the nation. And this is a battle we will win, and we’ll do it together, I promise you.

Thank you. And may God bless you, and may God protect our troops.

AMY GOODMAN: Joe Biden, accepting the nomination for president of the United States on the final night of the virtual Democratic National Convention. When we come back, we’ll get response from Harvard professor Cornel West and Ben Jealous, now president of People for the American Way. Stay with us. 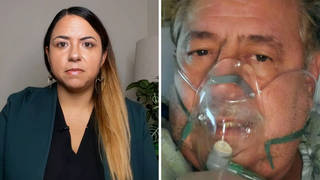 “His Only Preexisting Condition Was Trusting Trump”: Daughter Speaks at DNC After Dad Dies of COVID