The Republican National Convention opened in Charlotte, North Carolina, with dire warnings that a Joe Biden presidency could destroy the country. We feature excerpts from President Trump’s surprise speech after he was formally nominated for a second term, claiming without evidence that Democrats are planning to steal the election, and other speakers throughout the evening who repeatedly praised Trump’s handling of the pandemic even as the U.S. coronavirus death toll passes 177,000.

AMY GOODMAN: The Republican National Convention opened in Charlotte, North Carolina, Monday. President Trump made a surprise speech during the day. Just minutes after he was formally nominated for a second term, he spoke in front of a group of delegates in Charlotte.

PRESIDENT DONALD TRUMP: Now, if you want to really drive them crazy, you say “12 more years.”

PRESIDENT DONALD TRUMP: Because we caught them doing some really bad things in 2016. Let’s see what happens.

AMY GOODMAN: While Trump spoke in Charlotte, the new postmaster general, Louis DeJoy, who is a major Trump donor, was being grilled by Democrats on the House Oversight Committee, who accused him of trying to sabotage the Postal Service ahead of the election.

In an unusual decision, the Republican Party has decided not to adopt a new platform this year, a move that ensures there will be no public debate at the convention about the direction of the party under Trump.

During the primetime Republican National Convention, speakers, including the president’s son Donald Trump Jr., used apocalyptic language to describe the dangers of a Biden presidency. The evening kicked off with Charlie Kirk, founder of the right-wing student group Turning Point.

AMY GOODMAN: Throughout the first night of the Republican convention, speakers repeatedly praised Trump’s handling of the COVID-19 outbreak, even as the U.S. death toll tops 177,000 — by far the highest in the world. The U.S. has less than 5% of the world’s population but more than 25% of the deaths. No mention was made of Trump’s record of spreading misinformation, his urging of states to reopen too soon or his months-long refusal to wear a mask during the pandemic. This is Amy Ford, a nurse from West Virginia.

AMY JOHNSON FORD: President Trump recognized the threat this virus presented for all Americans early on, and made rapid policy changes. And as a result, telehealth services are now accessible to more than 71 million Americans, including 35 million children.

AMY GOODMAN: There continues to be a lack of tests and masks available to the overall population in the United States.

While polls show 90% of Black voters back the Biden-Harris ticket, a number of African American public figures were featured on Monday night’s Republican convention, including Vernon Jones, a Democratic state representative from Georgia.

REP. VERNON JONES: I’m here to tell you that Black voices are becoming more woke and louder than ever. The Democratic Party has become infected with a pandemic of intolerance, bigotry, socialism, anti-law enforcement.

AMY GOODMAN: The wealth white St. Louis couple who brandished guns at Black Lives Matter protesters who marched near their mansion in June also spoke. Mark and Patricia McCloskey now face felony charges over the incident, which saw Mark McCloskey point a semiautomatic assault rifle at protesters while Patricia waved a silver pistol, her finger on the trigger.

PATRICIA McCLOSKEY: What you saw happen to us could just as easily happen to any of you who are watching from quiet neighborhoods around our country. And that’s what we want to speak to you about tonight.

MARK McCLOSKEY: That’s exactly right. Whether it’s the defunding of police, ending cash bail so criminals can be released back out on the streets the same day to riot again, or encouraging anarchy and chaos on our streets, it seems as if the Democrats no longer view the government’s job as protecting honest citizens from criminals, but rather protecting criminals from honest citizens. Not a single person in the out-of-control mob you saw at our house was charged with a crime. But you know who was? We were.

PATRICIA McCLOSKEY: They’re not satisfied with spreading the chaos and violence into our communities. They want to abolish the suburbs altogether.

AMY GOODMAN: Black Lives Matter protesters were passing the McCloskeys’ house to get to the mayor’s house in protest, when the McCloskeys brandished their weapons at the protesters.

Many speakers on the opening night of the Republican National Convention warned of chaos if Trump loses the race. This is former Fox News host Kimberly Guilfoyle.

KIMBERLY GUILFOYLE: They want to destroy this country and everything that we have fought for and hold dear. They want to steal your liberty, your freedom. They want to control what you see and think and believe, so that they can control how you live. They want to enslave you to the weak, dependent, liberal, victim ideology, to the point that you will not recognize this country or yourself.

AMY GOODMAN: Kimberly Guilfoyle is the partner of Donald Trump Jr., who spoke next. She’s also the ex-wife of the California governor, Gavin Newsom. She also took aim at California. But Donald Trump Jr. also then addressed the convention.

DONALD TRUMP JR.: People of faith are under attack. You’re not allowed to go to church. But mass chaos in the streets gets a pass. It’s almost like this election is shaping up to be church, work and school versus rioting, looting and vandalism — or, in the words of Biden and the Democrats, “peaceful protesting.” Anarchists have been flooding our streets, and Democrat mayors are ordering the police to stand down. Small businesses across America, many of them minority-owned, are being torched by mobs. The Democrat mayors pretend it’s not happening. They actually called it a “summer of love.”

NIKKI HALEY: In much of the Democratic Party, it’s now fashionable to say that America is racist. That is a lie. America is not a racist country. This is personal for me. I am the proud daughter of Indian immigrants. They came to America and settled in a small Southern town. My father wore a turban. My mother wore a sari. I was a Brown girl in a black-and-white world. We faced discrimination and hardship, but my parents never gave in to grievance and hate.

AMY GOODMAN: The opening night of the Republican National Convention ended with Senator Tim Scott, the only Black Republican in the U.S. Senate. He claimed Joe Biden wants a cultural revolution in the United States.

SEN. TIM SCOTT: Our side is working on policy, while Joe Biden’s radical Democrats are trying to permanently transform what it means to be an American. Make no mistake: Joe Biden and Kamala Harris want a cultural revolution, a fundamentally different America. If we let them, they will turn our country into a socialist utopia. And history has taught us that path only leads to pain and misery, especially for hard-working people hoping to rise.

When we come back, we’ll speak to veteran Republican strategist Stuart Stevens, author of the new book, It Was All a Lie: How the Republican Party Became Donald Trump. Stay with us. 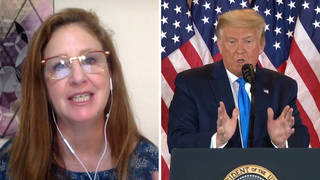 Dahlia Lithwick: Trump’s Ridiculous Coup Attempt Will Fail, But It Will Hurt Democracy in Long Run