The U.S. government continues to hold tens of thousands of asylum seekers and immigrants in detention centers and jails, ignoring the advice of medical experts as the coronavirus continues to spread. ICE has also continued to transfer and deport people — including those who are infected — making it a global superspreader. We speak with Luis Angel Reyes Savalza, an immigration attorney and co-director of Pangea Legal Services in San Francisco, who himself is undocumented and recently got arrested at a protest outside the mansion of California Governor Gavin Newsom demanding the release of people in state prisons and immigration jails, calling the situation “really alarming.”

StoryJul 07, 2020“They Don’t Care About Our Health”: Hunger Striker at Otay Mesa ICE Jail Speaks Out as COVID Spreads

As the coronavirus spreads rapidly throughout the United States, we look at how the government continues to hold tens of thousands of asylum seekers and immigrants in detention centers and jails, where social distancing is nearly impossible, ignoring the advice of medical experts and even the former head of ICE.

Nearly one in five people detained by ICE in May and June were likely infected with COVID-19, according to a new analysis by the Vera Institute. That’s about 15 times higher than the number of cases ICE has reported. At the same time, ICE has continued to deport people, including those who are infected, making it a global superspreader.

How are people in ICE jails getting the virus? In some cases, they contract it from people ICE has transferred there. This was the focus of a protest at California Governor Gavin Newsom’s mansion last week, when people chained themselves to his gate and demanded the immediate release of people in state prisons and immigration jails. This is Lisa Knox, attorney with the legal center, Centro Legal de la Raza.

LISA KNOX: Gavin Newsom, with the stroke of a pen, he could free folks. He could end this spread of COVID that’s happening throughout our prisons, our jails, our detention centers and throughout the world, thanks to ICE. But no, instead, he’s complicit in all of this.

Welcome to Democracy Now!, Luis Angel. It’s great to have you with us. Explain why you got arrested and, I mean, the risks you yourself took as an undocumented person to make your point.

Well, yeah, look, like you mentioned, the situation in ICE detention across the state and across the country, and really just the situation in prisons, is really alarming, and here in California, in particular. And like you’ll be hearing from Joe Mejia, one of the hunger strikers, there’s been an unprecedented hunger strike wave that has at this point encompassed every single detention center in California, where hunger strikers have demanded to Governor Newsom to take action, specifically that he stop transferring people who are being released, who are eligible for parole from state custody, where he has completely mishandled the pandemic, where there’s a spread of COVID-19, and stop transferring them over to ICE, where this spreads the pandemic. And as you know, ICE has a long history of dehumanizing immigrants and of just a complete disregard for human life and a complete disregard for providing basic access to medical care.

And so, for months, since the pandemic started, there’s been this growing push by people organizing in detention centers, demanding that the governor take action, especially when he speaks out saying that Black lives matter, that immigrant lives matter, but his actions have fallen quite short of that. Like as you know, California had the first COVID-19 death. It didn’t happen in Alabama. It didn’t happen in Georgia. It happened right here in California under Governor Newsom’s desk. And after we exhausted conventional channels of discussing with his office — we met with his office — and his complete failure to act put us in a position where the lives of our clients and of our community members were at risk, that we felt compelled to take action and to bring their demands directly to the governor’s door. And this is why we staged that civil disobedience action a week ago.

JUAN GONZÁLEZ: And, Luis Angel Reyes, what specifically are the governor’s powers in this situation? What are the limitations on it? And what could he do proactively in terms of the transfer of folks to ICE detention?

LUIS ANGEL REYES SAVALZA: Yeah. So, the hunger strikers and the movement has been very clear about what the governor can do. Federal courts in California and across the country have found that ICE conditions are so gruesome, that they’re so inhumane, that they pose such a danger to life and to health, that detention under this pandemic is actually unconstitutional, and have been ordering people’s release. And a lot of our hunger strikers have been able to obtain release through these means.

But even after these federal courts have ruled ICE detention essentially unconstitutional under this pandemic, Governor Newsom has continued to repopulate these detention centers by transferring people who, again, are eligible for parole, eligible for release from state custody, and transferring them directly into ICE custody, essentially feeding now the largest exporter of COVID-19 across the world, which is ICE.

And he has just completely ignored these demands. He’s also failed to stop the expansion of ICE facilities in the state, despite a state law that prohibits private detention in California. So, these very concrete demands about ending transfers, ending the expansion of ICE for-profit detention centers in California, as well as inspecting these facilities to hold ICE accountable, and especially inspect the facilities where COVID-19 deaths have taken place, and to use his clemency power is something that is clearly within his authority, and he has completely failed to act.

And so we put our own health at risk by risking arrest, and, like you mentioned, myself, being undocumented, yeah, definitely put myself at risk also of deportation. But when our clients and our community members are screaming at the top of their lungs and are taking really drastic action to demand life under this pandemic and to not be forgotten, we felt that it was necessary to take these actions.

And what we were met with, after staging the civil disobedience at the Governor’s Mansion, was really shocking — right? — that Governor Newsom resorted to a lot of the tactics that oftentimes are attributed to the Trump administration, which was he resorted to the riot police and also a rare bail enhancement to make sure that the protesters were booked into jail, a jail in Sacramento that has had a COVID-19 outbreak. And really what this did was that it exposed to us, it gave us a little glimpse of, what our clients have been telling us for months, which is that you can’t socially isolate, you can’t physically distance in detention and in jails, and that the situation inside prisons is a tragedy waiting to happen. There’s already been nearly 50 deaths in California. And, you know, this is on the governor’s hands. He needs to do more.

AMY GOODMAN: Let me ask you about a colleague of yours, one of the people who was arrested, the immigration attorneys and activists outside the mansion. She had a fever? Can you explain what happened?

LUIS ANGEL REYES SAVALZA: Yeah. So, we took many precautions before doing this action. We socially distanced during the protest. We also got COVID-tested before the protest.

But instead of the governor meeting with us, resorted to riot police. Riot police were not wearing protective gear, no face masks. We were then arrested. We then learned that he utilized a bail enhancement to book us into jail.

And this colleague, like you mentioned, tested a temperature above 100 degrees and was asked to drink cold water and to drink ice water to lower that temperature. So, instead of following the protocols that Governor Newsom every single week preaches on television, the state police, you know, the Sacramento jail guards didn’t practice these basic protocols and, with the case of one of our colleagues, actually circumvented those protocols by having that individual drink cold water.

And then, inside the jails, you know, the squalid cells, the grimy cells, just no hygiene, no soap, no social distancing. There was one colleague — you know, several colleagues who were denied food through these 16 hours, were denied water, so they were dehydrated. One colleague actually was vomiting from dehydration, asked for medical assistance and was denied basic medical care.

And so, again, these really tragic stories that we’re hearing from our clients in detention were all too real when we experienced this firsthand — and again, only for a period of 16 hours, and our clients have been in detention, like you’ll hear from Joe, for months, oftentimes years, under these conditions.

AMY GOODMAN: Yes, we are going to go to Joe right now. I want to thank you, Luis Angel Reyes Savalza, immigration attorney, co-director of Pangea Legal Services in San Francisco, undocumented yourself, and yet you risked that arrest outside California Governor Newsom’s mansion while participating in the peaceful protest calling for the release of people from ICE prisons amidst the pandemic. 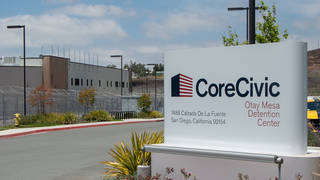 “They Don’t Care About Our Health”: Hunger Striker at Otay Mesa ICE Jail Speaks Out as COVID Spreads