With less than two months before November, the Poor People’s Campaign has launched a push to register tens of millions of poor and low-income voters, who could decide the fate of the election. “Voting is power unleashed,” says Rev. Dr. William Barber, co-chair of the Poor People’s Campaign and president of Repairers of the Breach. “We’ve got to train the people on the power of the vote, the power to protect the vote, and the power to shape public policy by the vote.” The initiative is called MORE, which stands for Mobilizing, Organizing, Registering, Educating People for a Movement That Votes.

AMY GOODMAN: This is Democracy Now! I’m Amy Goodman. Early voting begins this week in Minnesota, Wyoming and South Dakota, with the November 3rd election just seven weeks away. But voting rights advocates are sounding the alarm over efforts to disenfranchise voters, as President Trump and others cast doubts on voting by mail.

In the key battleground state of Florida, a federal appeals court has ruled hundreds of thousands of former prisoners must first pay court fines and fees before they can register to vote. The ruling overturns a ruling by a federal judge who compared the restriction to an unconstitutional poll tax. This comes nearly two years after voters in Florida approved a landmark referendum to restore voting rights to people with felony convictions.

In other election news, the Wisconsin Supreme Court has temporarily blocked absentee ballots from being mailed last week, one week before the deadline, while the court decides whether to add the Green Party’s candidate to the ballot. Meanwhile, in Pennsylvania, election officials delayed sending out ballots due to a slew of lawsuits and other challenges.

To talk more about voting rights and the election, we’re joined by Reverend William Barber, co-chair of the Poor People’s Campaign, president of Repairers of the Breach. The Poor People’s Campaign is running a campaign ahead of the election called MORE. It stands for Mobilizing, Organizing, Registering, [Educating] People for a Movement That Votes. Reverend Barber is joining us from Raleigh, North Carolina, a key swing state.

What are you doing now, Reverend Barber, to get people out to the polls, as clearly that right is being cracked down on all over the country?

REV. WILLIAM BARBER II: Yeah. We must do more, Amy. And thank you for having me on. We must do more mobilizing, organizing, registering, educating people for the movement who vote. And voting is power unleashed. And there’s a great fear of people of every race, creed and color, particularly poor and low-wealth people, organizing. There is fear. It’s a fear that’s been around ever since the Southern Strategy was implemented by people like George Wallace and Strom Thurmond and Richard Nixon and Lee Atwater, because they know that if poor and low-wealth people mobilize together, they can change the outcome of elections. And that’s not just emotional, that’s empirical.

So, what we’re doing is we have this campaign. And tonight, you can go to www.PoorPeoplesCampaign.org tonight at 7 p.m. East Coast, 4 p.m. West Coast. We’re having a National Moral Monday “Voting Is Power Unleashed” teach-in. And we had 3 million people that showed up for our Mass Poor People’s Assembly in June, on June 20th, to view. We are inviting them and millions more to join us. We’ve got to train the people on the power of the vote, the power to protect the vote, and the power to shape public policy by the vote.

And here’s what the metrics say, Amy. In the last election, 63 million poor and low-wealth people did not vote — 63 million were eligible to vote, 29 million voted, 34 million didn’t vote.

But we also found out from the data that in 15 states, many of them in those Southern states and across the Midwest, if poor and low-wealth voters just vote from 1% to 19% increase from last time — I want your viewers to hear that: not 20%, not 21, 25, 30%, just 1 to 19% increase among poor and low-wealth people, regardless of race, creed or color, who vote issues, who vote their agenda — fundamentally shifts all the elections, from the gubernatorial to the Senate to the presidency, can literally determine who sits in those seats, and we can break the solid South.

AMY GOODMAN: President Trump recently suggested people in North Carolina, where you are, break the law by voting twice in the upcoming presidential election — once by mail and then again in person — to test the election system. This is what he said.

PRESIDENT DONALD TRUMP: Let them send it in, and let them go vote. And if their system is as good as they say it is, then obviously they won’t be able to vote. If it isn’t tabulated, they’ll be able to vote. So that’s the way it is. And that’s what they should do.

AMY GOODMAN: Under federal law, voting twice is illegal. In North Carolina, it’s also illegal to induce someone to vote twice. Meanwhile, the Republican National Committee and the Trump campaign have sued the state of Montana to block an expansion of mail-in voting. Reverend Barber, if you can comment on this, and also what just happened in Florida with the appeals court ruling that hundreds of thousands of people — I mean, this is a key swing state, where this could clearly tip the balance — will not be able to vote if they have felonies on their record and can’t afford to pay all of the costs related to this at once?

REV. WILLIAM BARBER II: Well, first of all, Trump is criminality personified. He will put his people at risk, because, you know, there’s a five-year felony prison sentence for doing exactly what he said do.

He wants to confuse the systems. He knows that in North Carolina, for instance, we have numerous days of early voting, same-day registration. We also have absentee balloting. And we also have on Election Day. And he knows that if people engage, they fundamentally lose. You know, we just finished beating all of the racist voter suppression laws that Thom Tillis, who’s now in the Senate, who’s running again, in North Carolina, had helped put in place. So this is the first election where we’re not under those voter suppression laws. The courts have ruled both in our favor in terms of undoing racist gerrymandering, undoing those laws. And North Carolina can easily turn with people turning out to vote. He simply wants to confuse everything.

We see, in these other states, the great fear that Republicans have of people voting. They don’t want anybody to vote. The only people they want to vote is the small group of people that support them. They don’t want persons who have paid their debts to society to vote. We’re having strange decisions, though. And one thing we got, the decision we saw in Florida, but in North Carolina we just won a decision that actually will allow a large number of formerly incarcerated people to vote, even if they have not finished paying their monetary debt to society.

And that’s one of the things tonight. We have two law firms that have fought against voter suppression: Forward Justice, led by attorney Caitlin Swain, and the NAACP Legal Defense Fund, led by Sherrilyn Ifill. They’re going to be laying out what your power is to protect your vote. And we have to stay in and be steadfast, because nobody would be fighting this hard to keep people from voting, if it was not rooted in fear.

AMY GOODMAN: Finally, Reverend Barber, we just have 20 seconds. Tomorrow, Tuesday, September 15th, is the 57th anniversary of the bombing of the Birmingham church that killed the four little girls in 1963. In these last 20 seconds, your thoughts on what we should know today?

REV. WILLIAM BARBER II: We’ll be there, Richard Trumka and I, with the AFL-CIO, and myself and a pastor laying a wreath and then speaking to the nation, that just like labor and faith came together in Birmingham to transform the nation, even after their deaths and before, we have to do the same thing today. Tune in at 11:00 Central, 12:00 Eastern. We have a message to the nation, calling everybody to join together to fight against regressivism and racism, and stand up for life, for justice and for truth.

AMY GOODMAN: And that’s the PoorPeoplesCampaign.org. Reverend Dr. William Barber, I want to thank you so much for being with us. I’m Amy Goodman. Thanks for joining us. 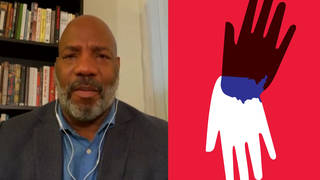