The mainstream media’s role in perpetuating racism has come under increased scrutiny during the nationwide uprisings against injustice, leading to resignations and firings at news outlets across the country and calls for more diverse newsrooms. Daniel Thompson, the former digital editor at Kenosha News, says that’s what led him to quit his job after his news outlet ran a misleading headline and article about a peaceful Jacob Blake protest that focused almost exclusively on one speaker’s threat of violence. “Now more than ever for the media, it’s important to try to give a full, accurate picture.” says Thompson. “I don’t think the situation happened out of any malicious intent. I think it was simply ignorance and a lack of diversity or diverse voices that were part of the decision.”

Kenosha erupted in protests last week after the police shot Jacob Blake at point-blank range in the back at least seven times, leaving him paralyzed. During the protests, a 17-year-old white vigilante armed with a semiautomatic rifle killed two protesters and injured a third.

Trump has refused to condemn the killings. During his visit to Kenosha, Trump did not meet with Jacob Blake’s family or directly mention Jacob Blake’s name. Trump also reiterated his recent comparison of cops who shoot with golfers who choke.

PRESIDENT DONALD TRUMP: We have to condemn the dangerous anti-police rhetoric. It’s getting more and more. It’s very unfair. You have some bad apples. We all know that. And those will be taken care of through the system. And nobody is going to be easy on them, either. And you have people that choke.

AMY GOODMAN: And that word “choke” is not lost on many. While many in the mainstream media talk about golfers choking over a three-foot putt, many are talking about George Floyd being choked to death, and Eric Garner and so many other African Americans in the custody of police, choked by police.

During his visit, Trump also repeated the falsehood that he ordered the National Guard to Kenosha, when in fact it was the state’s governor.

This is Jacob Blake’s uncle, Justin Blake, speaking at a rally in Kenosha as Trump visited.

JUSTIN BLAKE: We don’t have any words for the orange man. All I ask is that he keep his disrespect, his foul language far away from our family. We need a president that’s going to unite our country and take us in a different direction. … Our nephew was shot seven times in the back. Nothing can justify that. He had no weapon. And he’s paralyzed right now in the hospital. And our family is thanking everybody around the world for all their well-wishes and prayers.

AMY GOODMAN: For more, we go to Kenosha, Wisconsin, where we’re joined by Daniel Thompson. Up until Saturday he was digital editor at Kenosha News, but resigned to protest the paper’s coverage of a rally Saturday following the police shooting of Jacob Blake. He was the only full-time Black staff member at the Kenosha paper.

Daniel, welcome to Democracy Now! Explain what happened. Why did you quit?

DANIEL THOMPSON: Well, thank you for having me. I quit because I went to the event Saturday as a citizen. In fact, I was on vacation last week from the paper. And the event itself was very peaceful. There was one speaker that did give the quote that Kenosha News put in the headline. And honestly, right when it happened, you could tell that a lot of people in the crowd didn’t agree with it. And my personal opinion is that speaker should have never been there.

But it was peaceful. It was beautiful. I mean, I had pictures of children, Amish and Mennonite children playing with each other there. There was a child that was helping to hold a peace sign banner with me, that I didn’t even know. They just wanted to help hold a banner, so I let them hold a banner with me. And even Mr. Blake’s father had called for a night of peace across the nation. And a lot of the speakers did that.

And the funny thing is, I got home, and I was feeling really good about the event, and I had completely almost forgotten about that quote, really. It wasn’t at the front of my mind because it wasn’t such a prominent part of it. It wasn’t —

AMY GOODMAN: So, just to say that the headline itself that the Kenosha News ran was “Kenosha speaker: 'If you kill one of us, it's time for us to kill one of yours.’”

DANIEL THOMPSON: Yes, something to that effect. I have a screenshot of it. But, yes, the person said that. And they might have also been a person that led a chant that ended with race first, which I also cringed at. But that was on that side of it.

When I got home and I saw the newspaper’s headline, at first I thought it might have been a state or national story that had been caught up in the website. But when I realized it was a story about the event I was at, that’s when I contacted my boss. And you can see how that exchange went.

AMY GOODMAN: Explain. Talk about how that exchange went — they changed the headline — what they changed it to, and why you quit.

DANIEL THOMPSON: Well, what happened was, basically, when I saw the headline and I read the — or, I started reading the story and realized it was the same event, I was pretty livid, immediately. And I had screenshot it, circled it and sent it to not only my boss — my former boss, Bob Heisse, but also two of the reporting staff, just to let them know. And by that point, I was already talking myself down from just quitting.

And I wanted to give Bob the chance to address it, because the thing is, me and Bob Heisse did not have a bad working relationship at all. In fact, we had conversations like this multiple times in the newsroom about various topics. And most of the time, we were able to compromise, or he would listen to me. So, when he defended it, when I got that response, it was almost immediate. I mean, it was a 20-minute time period between me contacting him initially and me sending my letter of resignation.

AMY GOODMAN: So, they changed the headline to “Kenosha speaker strays from message at rally,” but the online article still included only the video of that speaker’s remarks, and the video’s caption still is the previous headline. We only have two minutes, but can you talk, since media can so much shape public opinion, overall, how you feel the Kenosha News contributed to what you were concerned about, a climate misrepresented in Kenosha, in your town?

DANIEL THOMPSON: OK. So, I had been actually following protests since the first night they came to Kenosha following the shooting of George Floyd. So, I’ve been among these local protesters, and I’ve gotten to know a lot of them. So, over time, I’ve started to see that people — people like to think that there are two groups, that there’s protesters and counterprotesters. But it’s not. You really have multiple groups, and some of them are violent, some of them aren’t.

So, now more than ever for the media, it’s important to try to give a full, accurate picture. And I think there is also the impulse now, because more companies are moving to digital and trying to get digital subscriptions, that you’re seeing more sensational headlines now to get more page views. And it’s not — I don’t think the situation happened out of any malicious intent. I think it was simply ignorance and a lack of diversity or diverse voices that were part of the decision.

DANIEL THOMPSON: Yes. Since I resigned — so, I think of my resignation as a leap of faith, really. I mean, I had nowhere to go from Kenosha News. But I took that leap of faith, and the community that I’ve been covering, which is Kenosha, caught me. And if you look at my GoFundMe for unemployment, I’m over $21,000 now, and I only asked for $5,000. And I do plan on, whatever the end total is by September 14th, donating half back to the Uptown neighborhood, which was badly destroyed throughout —

DANIEL THOMPSON: — throughout all this.

DANIEL THOMPSON: But I’m going to —

DANIEL THOMPSON: I’ll be in Kenosha. I’ll stay in Kenosha, and I’ll be reporting.

AMY GOODMAN: You’re starting — and you hope to start an independent media company in Kenosha?

AMY GOODMAN: Well, Daniel Thompson, I want to thank you for being with us. And I just wanted to update people: Local TV station WTMJ-TV reports Kenosha business owner declines President Trump photo op, so a former owner had to come in and replace him. Daniel Thompson, former digital editor at Kenosha News, who resigned his position in protest of a headline he says mischaracterized the rally for Jacob Blake.

That does it for our broadcast. I’m Amy Goodman. Wear a mask. Save lives. Stay safe. 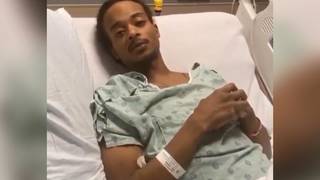