U.S. Supreme Court Justice Ruth Bader Ginsburg first gained fame in the 1970s when she co-founded the Women’s Rights Project at the American Civil Liberties Union and argued six gender discrimination cases before the Supreme Court. One of those cases was Weinberger v. Wiesenfeld, which centered on a widower who was refused Social Security benefits after his wife died during childbirth. We speak with Stephen Wiesenfeld, who was told his gender made him ineligible and that only women were entitled to survivor’s benefits. Ginsburg argued in the Supreme Court that denying fathers benefits because of their sex was unconstitutional, and won a unanimous 8-0 decision in the case. Wiesenfeld, who would become a lifelong friend to the late Supreme Court justice, says she “took their very conservative court and taught them that the stereotypes when they hurt one gender, hurt the other gender, as well.”

Justice Ruth Bader Ginsburg died Friday at the age of 87. We now look at one of the cases for which she first gained fame in the '70s, when she co-founded the Women's Rights Project at the American Civil Liberties Union and argued six gender discrimination cases before the Supreme Court. The case’s name was Weinberger v. Wiesenfeld. Justice Ginsburg and her plaintiff, Stephen Wiesenfeld, explain the case in this clip from the award-winning documentary RBG. We also hear from feminist icon Gloria Steinem. But it begins with Justice Ginsburg.

RUTH BADER GINSBURG: A young man had a tragic experience. His wife had an entirely healthy pregnancy, and he was told that he had a healthy baby boy, but his wife had died.

STEPHEN WIESENFELD: The problem was an amniotic embolism. And at that particular point, nobody had ever survived that. They did keep her alive for about four hours. But by 3:30 in the afternoon, the code blue came along, and she died. Jason was a very easy child. My attitude toward raising a child is that a child is not there for me, I’m there for him. And that’s what my job was.

RUTH BADER GINSBURG: He determined that he was going to be a caregiving parent to that child. He went to the local Social Security office and asked about the benefits that he thought a sole surviving parent could get. And he was told that benefit is called a mother’s benefit, and he didn’t qualify. So he wrote a letter to the editor of his local newspaper, and he said, “I’ve heard a lot about women’s lib. Let me tell you my story.”

STEPHEN WIESENFELD: “To the editor: … It has been my misfortune to discover that a male can not collect Social Security benefits as a woman can. … Had I been paying into the Social Security system and had I died, she would have been able to receive a benefit, but male homemakers can not.” I wonder if Gloria Steinem knows about this?

GLORIA STEINEM: Ruth took a case in which a man was discriminated against in order to show the depth and the importance of sex discrimination. Very intelligent thing to do.

AMY GOODMAN: That was Gloria Steinem. Well, Justice Ruth Bader Ginsburg called the Supreme Court win her favorite case. The plaintiff, Stephen Wiesenfeld, became a lifelong friend. She officiated both at his and his son’s weddings.

Welcome to Democracy Now!, Stephen. Your thoughts today on the passing of your dear friend, and also the significance of this case?

STEPHEN WIESENFELD: Good morning to you. Thank you for having me here.

My grief was heavy on Friday night, and it still is today. And it’s on two levels, one of course being the personal level, but more important is that it’s a national tragedy. She was really the protector of the freedoms of — or, the problems that occur in society, ending gender-based discrimination, difference between the races, difference between creeds. Her belief was from the United States Constitution, where in the Preamble it says “We the people.” She considered everybody to be “We the people.” Everybody should be treated equally under the law.

And just to continue for a moment on what Julie was saying, the way the laws have been written, before 1970, before Ruth Bader Ginsburg came along, the stereotypes are that males, they work, they pay money into their systems, they receive a salary, they take care of their families. Women stay home, they raise children, they take care of the house. And she, between 1972 and 1978, in just a six-year period, took the Warren Burger very conservative court and taught them that the stereotypes, when they hurt one gender, hurt the other gender, as well, and used my case to point that out.

There were three points of view that she dealt with the case, first one from the point of view of the woman. Now, my wife worked for seven years as a schoolteacher before she gave birth and passed away. And she paid money into the Social Security system. A similarly situated male, working seven years at the school system, being paid the exact amount, paying money into the Social Security system, when he passed away, his wife would receive a Social Security benefit. When a woman passed away, the male surviving husband did not receive a benefit. And Ruth Bader Ginsburg felt that this made the woman’s money, the salary that she earned, worth less than the male’s. Her money got lost even though she was paying into the system. It did not have an actual insurance benefit for the surviving spouse.

STEPHEN WIESENFELD: So, that was one — yes.

AMY GOODMAN: So, in these last few minutes we have, can you talk about when Ruth Bader Ginsburg contacted you, and what the decision meant for you, the Supreme Court decision that she won so overwhelmingly?

STEPHEN WIESENFELD: She contacted me because I had written a letter to the editor, that you just played. And a woman named Phyllis Zatlin Boring, who worked at Rutgers University — she was a teacher there — and was friends with Ruth, who also was working at Rutgers University, and contacted me and asked me if I’d like to pursue this further. And I said, “That actually happens to be why I wrote the letter, is because I was looking for somebody to give me some direction and to point out this inequity in the law.” And she put me in touch with Ruth Bader Ginsburg. Ruth had just become co-founder of the Women’s Rights Project at the American Civil Liberties Union. And they helped us along with the case.

AMY GOODMAN: And, Stephen, the day the Supreme Court handed down its unanimous decision in your favor?

STEPHEN WIESENFELD: Was March 19th, 1975. And it came about 11:30 or so in the morning of — that was a Wednesday. And a neighbor called me, told me about it. A couple of minutes later, a radio station called. I gave an interview.

As soon as I got off the phone, Ruth was on the phone. She was on a highway. There used to be pay booths on the highway at that time, pay phone booths. And so she stopped at one and called me and gave me the news. And her big question to me was: How did they vote? It was very important to her to know what the decision was. So, at the next phone call, she found out that it was 8 to nothing, Justice William Douglas being ill at the time.

AMY GOODMAN: So, finally, she then, decades later, would officiate over your second wedding and also the son who you raised at home, his wedding, too, Jason’s wedding?

STEPHEN WIESENFELD: Yes. In 1998, my son Jason married at Coral Gables, Florida. And she came to visit for the weekend. And I married my second wife Elaine in 2014. And so, there, we went to the Supreme Court and were married by her with our immediate families around us.

AMY GOODMAN: Well, again, condolences on this loss, that is personal for you, as well as global, Stephen Wiesenfeld, plaintiff in the 1975 Weinberger v. Wiesenfeld case. Justice Ruth Bader Ginsburg once called him her favorite plaintiff.

And this update: President Trump has just said he plans to announce his pick to replace Ruth Bader Ginsburg on Friday or Saturday. He said his shortlist is down to five people. 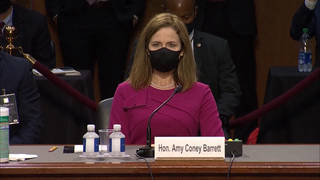