“He Wants Violence in the Streets”: Trump’s “White Supremacist Project” on Full Display at Debate

Donald Trump and Joe Biden were asked about how to address racism during the first presidential debate held in Cleveland. While Biden expressed sympathy with victims of police brutality, President Trump insisted that most violence came from left-wing groups — a false claim ignoring that the vast majority of political violence in the U.S. comes from right-wing extremists, according to the FBI and others. Trump’s refusal to reckon with the issue “poses a real and grave threat to Black and Brown people in particular in our country who are often the victims of racial violence,” says Kristen Clarke, president and executive director of the Lawyers’ Committee for Civil Rights Under Law.

During last night’s first presidential debate, Fox moderator Chris Wallace asked both candidates why voters should trust them to deal with the race issues facing this country over the next four years. This is what they answered.

JOE BIDEN: It is true, the reason I got in the race is when those people — close your eyes. Remember what those people looked like coming out of the fields carrying torches, their veins bulging, spouting and just spewing anti-Semitic bile, and accompanied by the Ku Klux Klan. A young woman got killed. And they asked the president what he thought. He said, “There were very fine people on both sides.” No president has ever said anything like that.

CHRIS WALLACE: It is his two minutes, sir.

JOE BIDEN: Second point I’d make to you is that when Floyd was killed, when Mr. Floyd was killed, there was a peaceful protest in front of the White House. What did he do? He came out of his bunker, had the military use tear gas on them, so he could walk across to a church and hold up a Bible. And then what happened after that? The bishop of that very church said that it was a disgrace. The general who was with him said all he ever wants to do is divide people, not unite people at all.

CHRIS WALLACE: President Trump, you have two minutes. Why should Americans trust you over your opponent to deal with race issues?

JOE BIDEN: I never said it.

CHRIS WALLACE: No, no, sir. It’s his two minutes.

Still with us, Temple University professor Marc Lamont Hill, and Kristen Clarke is now joining us. She’s the president and executive director of the national Lawyers’ Committee for Civil Rights Under Law.

Kristen, let’s begin with you. Start off with your reaction to what they said here. We just were discussing President Trump refusing to condemn white supremacists, when pushed on it several times — and on what he is saying here.

KRISTEN CLARKE: It was a deeply disturbing moment last night. In many respects, you know, that question, “Will you condemn white supremacy?” was a softball. It would have been very easy for President Trump to disavow white supremacy in crystal-clear terms. You think about the tragedies that the American nation has lived through in recent time — the murder of nine peaceful worshipers at the Baptist church in Charleston, South Carolina; the murders of 11 worshipers at the Tree of Life synagogue in Pittsburgh; the murders of over 20 people in El Paso, Texas; the murder of Heather Heyer in Charlottesville, Virginia. These horrendous incidents, all fueled by white supremacist violence, are easy for any reasonable-minded American to condemn, much less the leader of our country. And we know that the FBI director has identified white supremacy as one of the greatest threats that we face in our nation today. So I’m deeply disturbed.

And, you know, I think about how history will reflect on this moment, and yesterday was a dark day for our country. I think about 1915, when Woodrow Wilson screened Birth of a Nation inside the White House. And over a century later, that is a moment that stands out for any ordinary American as a White House that embraced, unnecessarily, white supremacist rhetoric. And essentially, that’s what we saw yesterday.

We know that the Proud Boys are rejoicing today. We know that they have taken this moment to breathe life into their movement. They are boasting about how last night has helped to energize their base and helped them to recruit new members. And so this is a moment that poses a real and grave threat to Black and Brown people in particular in our country who are often the victims of racial violence.

JUAN GONZÁLEZ: And, Kristen Clarke, this repeated emphasis of the president throughout the debate last night, and obviously in statements previously, about the dangers of the left and antifa, and he kept referring to Portland, at one point claiming, completely erroneously — a complete lie — that the sheriff of Portland had just that day endorsed him. But then, Mike Reese, who is the sheriff of the county in which Portland is, immediately tweeted out, “I have never supported Donald Trump and never will.” And yet he brazenly claims that he had the support of the sheriff of Portland. This total distance from the facts, that often happens with the president and yet goes almost unchallenged, I’m wondering your sense of some of those claims that he’s made.

But I do want to talk a little bit about the situation that’s happening on the ground in many cities across our country as communities continue to engage in protests and demonstrations against racial violence, against white supremacy, against police violence. And these are issues that we didn’t hear President Trump speak to last night, speak to a solution or a cure for issues that are really tearing apart the fabric of our nation, and issues that are front and center for the Black Lives Matter movement and for many people, multiracial and multigenerational, who are calling for healing in our country right now.

You know, something else that this president has done has — he’s promoted militarization of the police and really emboldened federal law enforcement to be used as a weapon against peaceful demonstrators. And it’s created this toxic situation that we’re seeing in many cities across the country right now. I think about Lafayette Square, just outside the shadow of the White House, where President Trump, alongside Attorney General Barr and other federal officials, ordered federal law enforcement to use violence at the hands of peaceful demonstrators who were assembled to make a statement about racial and police violence in our country. The ensuing chaos and brutal attack that was perpetrated resulted in harm to many people, who we have brought a lawsuit on behalf of. That case, Black Lives Matter D.C. v. Trump, is now pending in federal court.

But I fear that unless we see change or intervention soon, that we are spiraling downward into a sea of further racialized violence in our country. And for my organization, the Lawyers’ Committee for Civil Rights Under Law, we work closely with the victims of racial hate crimes. We work closely with the families of Emmett Till. We work closely with the families of James Byrd and the mother of Heather Heyer. They are reminders to us every day about the clear and present danger presented by ongoing white supremacy in our country right now. And all that President Trump did yesterday was fanned the flames of hatred, in ways that really present a risk to our lives.

AMY GOODMAN: There is so much to talk about in last night’s debate. 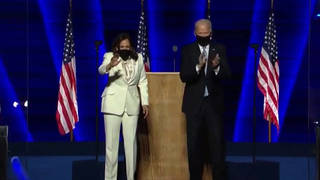