During the first presidential debate, former Vice President Joe Biden repeatedly criticized President Trump over his handling of the coronavirus pandemic, which has killed over 205,000 people in the United States — the highest death toll in the world. Trump mocked Biden for wearing a mask, while claiming that a vaccine would be available within weeks. “It was very bizarre,” says Marc Lamont Hill, author and professor of media studies and urban education at Temple University. “The idea of not erring on the side of caution is representative of the entire Trump administration’s handling of the COVID-19 crisis.”

AMY GOODMAN: Marc Lamont Hill, you had COVID, and I want to turn to the issue of healthcare and the pandemic. On Tuesday night, Joe Biden rejected accusations that he supported Medicare for All, and acknowledged many people would not even be covered under his plan to create a government-sponsored public option. But as he tried to explain his plan, the debate descended into chaos.

JOE BIDEN: The vast majority of the American people would still not be in that option, number one.

PRESIDENT DONALD TRUMP: — on the manifesto, we call it.

PRESIDENT DONALD TRUMP: And that gives you socialized medicine.

JOE BIDEN: Look, hey, I’m not going to listen to him.

PRESIDENT DONALD TRUMP: Are you saying you didn’t agree?

JOE BIDEN: The fact of the matter is, I beat Bernie Sanders.

PRESIDENT DONALD TRUMP: Not by much.

JOE BIDEN: I beat him a whole hell of a lot.

PRESIDENT DONALD TRUMP: Not by much.

PRESIDENT DONALD TRUMP: — you would have lost every primary.

JOE BIDEN: All he knows how to do is hurt people.

PRESIDENT DONALD TRUMP: On Super Tuesday, you got very lucky.

JOE BIDEN: Because here’s the deal. Here’s the deal. The fact is that everything he’s saying so far is simply a lie. I’m not here to call out his lies. Everybody knows he’s a liar.

PRESIDENT DONALD TRUMP: But you agree —

JOE BIDEN: I just want to make sure —

JOE BIDEN: I want to make sure —

CHRIS WALLACE: Mr. President, can you let him finish, sir?

JOE BIDEN: You know, you picked —

PRESIDENT DONALD TRUMP: — for the manifesto.

JOE BIDEN: There is no manifesto, number one.

PRESIDENT DONALD TRUMP: You just lost the left! You agreed with Bernie Sanders on a plan —

JOE BIDEN: Folks, do you have any idea what this clown’s doing?

PRESIDENT DONALD TRUMP: And under that plan, you have socialized — they call it Medicare for All.

JOE BIDEN: Well, I’ll tell you what. He is not for any help for people needing healthcare, because his —

JOE BIDEN: — because he, in fact, already has cost 10 million people their healthcare, that they had from their employers, because of his recession, number one.

JOE BIDEN: Number two, there are 20 million people getting healthcare through Obamacare now that he wants to take it away. He won’t ever look you in the eye and say that’s what he wants to do.

AMY GOODMAN: During the debate, Joe Biden repeatedly criticized President Trump over his handling of the COVID-19 pandemic, that’s killed over 205,000 people in the United States — by far the highest death toll in the world.

JOE BIDEN: Look, you folks at home, how many of you got up this morning and had an empty chair at the kitchen table because someone died of COVID? How many of you were in a situation where you lost your mom or dad and you couldn’t even speak to them, you had a nurse holding a phone up so you could in fact say goodbye?

PRESIDENT DONALD TRUMP: You would have lost far more people.

JOE BIDEN: How many people? That is —

JOE BIDEN: And by the way, your own —

PRESIDENT DONALD TRUMP: And you would have been months late.

JOE BIDEN: His own —

PRESIDENT DONALD TRUMP: You were months behind me, Joe.

JOE BIDEN: His own CDC director says we could lose as many as another 200,000 people between now and the end of the year. And he held up — he said, “If we just wear a mask, we can save half those numbers. Just a mask.” …

PRESIDENT DONALD TRUMP: He wants to shut down the whole country.

CHRIS WALLACE: President Trump, you have begun to increasingly question the effectiveness of masks as a disease preventer. And in fact, recently you have cited the issue of waiters touching their masks and touching plates. Are you questioning —

PRESIDENT DONALD TRUMP: No, I think masks are OK.

CHRIS WALLACE: — the efficacy of masks?

PRESIDENT DONALD TRUMP: You have to understand, if you look — I mean, I have a mask right here. I put a mask on, you know, when I think I need it. Tonight, as an example, everybody’s had a test, and you’ve had social distancing and all of the things that you have to. But I wear masks —

PRESIDENT DONALD TRUMP: — when needed. When needed, I wear masks.

PRESIDENT DONALD TRUMP: I don’t have — I don’t wear masks like him. Every time you see him, he’s got a mask. He could be speaking 200 feet away from me, and he shows up with the biggest mask I’ve ever seen.

Marc, you had COVID. Respond to this discussion and what — well, we’ve seen President Trump’s record. If you can talk about that and what Joe Biden is recommending?

MARC LAMONT HILL: Yeah, it’s a fascinating thing to watch the president of the United States mocking someone for wearing a mask too much. It was almost like a high school bully. It was very bizarre. The idea of publicly representing the importance of the masks, to me, is a good idea, even if one were to overuse it, if that’s even possible. To me, I’d rather err on the side of caution than not. But the idea of not erring on the side of caution is representative of the entire Trump administration’s handling of the COVID-19 crisis.

Trump didn’t really defend himself against the fact that 200,000 people have died. Instead, he simply argued that more would have died under Joe Biden. He didn’t address the fact that this was entirely preventable. He pats himself on the back for saying that he was able to stop people coming in from China, largely playing on xenophobia, but ignores the fact that he didn’t block any sort of travel from Europe. And when we look at a place like New York City, the bulk of the people who had COVID right here, where I am right now, the strains that they found were from Europe and other parts of North America. So, again, he smuggles in his racism and his xenophobia into his handling of a public health crisis.

The issue around masks isn’t just about Trump’s wearing of the mask; it’s about the level of direction that came out of the White House regarding what we should do in a public health crisis. He lies on Fauci, essentially, by suggesting that Fauci was saying that we shouldn’t wear masks, when in fact Fauci was speaking to the scarcity of the masks. But the scarcity of the masks emerges because Donald Trump didn’t follow the pandemic playbook that Obama left, which suggested that we need tens of millions of masks in — not in storage, but in reserve. And yet Trump ignored that, along with every other dimension of this.

And as far as the public health part — or, rather, the healthcare part of this, this is an interesting moment. Trump decides — spends the entire debate painting Joe Biden, a neoliberal, as a radical socialist. I mean, at the same debate where Biden is defending police and saying he doesn’t want to defund police and doesn’t support the Green New Deal and doesn’t support Medicare for All, he’s still being painted as a socialist. Now, he’s a much better alternative to Trump, and I’m certainly going to vote for him for that reason, but it’s fascinating to watch Trump use this language.

The truth here is, is that Trump has not engaged in any kind of plan or practice that will allow more Americans to be covered, that will allow more Americans to be safe. Yes, he signed an executive order to get us cheaper insulin, but that addresses 2% of the population of people who need insulin. So, no, it’s not coming into America like water. His attempts to address preexisting conditions through an executive order do nothing to address what the ACA did. He has essentially undermined any chance at universal healthcare, any chance at protecting the American public, but especially the most vulnerable. Biden’s plan isn’t great. It’s not perfect. But it’s considerably better than Trump’s. And that’s what we have to deal with right now at this moment, is the reality that Trump has consigned us to death if we continue to follow his plan. 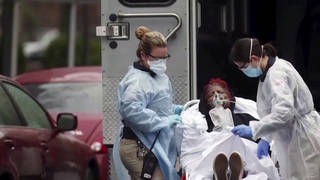