As the wealth of U.S. billionaires soars by over a trillion dollars during the pandemic, Oxfam is warning COVID-19 could lead to the biggest increase in global inequality on record. A new Oxfam report finds it could take more than a decade for poor people to recover from the health and economic crisis, and urges governments to take immediate action. “In every country that we looked at, inequality has gotten worse during the pandemic,” says Paul O’Brien, vice president of Oxfam America. “All around the world now, we are seeing folks struggling on the wrong end of inequality, while those who have been the beneficiaries of our broken economic system have done quite well.”

We look now at growing inequality during the pandemic. A new report finds the collective net worth of U.S. billionaires grew by more than $1.1 trillion during the pandemic. The Institute for Policy Studies and Americans for Tax Fairness said those gains could, quote, “pay for all the relief for working families” in the $1.9 trillion stimulus package President Biden has proposed, while leaving the nation’s richest households no worse off than they were before COVID-19 hit.

Meanwhile, a new report by Oxfam International shows it could take more than a decade for poor people to recover from the pandemic, and urges governments to take urgent action and, quote, “set concrete, time-bound targets to reduce inequality.”

Democracy Now! recently spoke with economist Darrick Hamilton, who wrote one of the report’s forewords.

DARRICK HAMILTON: What we should not be concerned about right now is austerity politics, some notion of deficit constraint.

Paul, welcome back to Democracy Now! Lay out what you found.

PAUL O’BRIEN: Thanks, Amy. Thanks for having me.

Well, it’s worrying. The last time we did this report — we tend to do it around Davos, when the rich gather, and usually in fur coats. This time, it’s virtually. The last time, it was bad, and it’s gotten a lot worse. In every country that we looked at, inequality has gotten worse during the pandemic. And perhaps it’s not surprising, but it is really worrying.

So, the richest 10 people, they ended up making half a trillion dollars during the pandemic. The richest thousand got all the money that they lost from the pandemic back, and got to the same level of wealth within nine months. But at the same time, it has been disastrous for people on the wrong end of poverty.

The reality of it was that most people on the planet Earth were one crisis away from going into deep poverty or extreme poverty. And that crisis happened. It happened in health terms. It happened in economic terms. It happened because they were locked down or they were forced to go out into precarious jobs. And so, all around the world now we are seeing folks struggling on the wrong end of inequality, while those who have been the beneficiaries of our broken economic system have done quite well.

JUAN GONZÁLEZ: And, Paul, could you talk especially about the impact in the U.S. on African Americans and women in particular? You note that one in five Black women lost their jobs between February and April of 2020.

PAUL O’BRIEN: Yeah. Well, let’s talk about it in both health terms and in economic terms. In health terms, the really troubling fact is that this has disproportionately landed worst for Black and Latinx communities. If they had faced mortality rates at the same level as white communities, there would be 22,000 people alive today that are not. And a lot of it is because of how our economy is structured in terms of economic inequality. So, if you’re in the top quartile of income in the United States, you have a 90% chance of having paid sick leave. But if you’re in the bottom quartile, less than half of you are going to get paid sick leave. You’re out there as an essential worker or as a frontline worker, or you’re often in the care economy, looking after kids or the vulnerable or the elderly. Or you can’t do what I’m doing right now, which is to sit behind a desk, do your job and get paid. You have to be out there taking risks. So, in both health terms and in economic terms, this has been really rough for American workers. And we work alongside some of them; I’m happy to reflect some more personal stories if that’s helpful.

AMY GOODMAN: So, women have been particularly hard hit by the pandemic. Some have described this whole thing as a “she-session.” During the month of December, women in the U.S. lost a net 156,000 jobs, while men gained 16,000 jobs, meaning women accounted for all the 140,000 net jobs lost. What this means, this setback for women in this country, decades, and what has to be done, and particularly around COVID and who gets sick, who dies, who gets access to vaccines, not only in the U.S., but around the world?

PAUL O’BRIEN: Precisely, Amy. And the data around the world, I’m not sure it’s even worse, but it is terrible in terms of how it has discriminatorily impacted women. A lot of it is because in the informal economy you’ve seen 2 billion workers go out of work. Women are often on the frontlines of undersecured labor. In the Middle East and North Africa, many of them have been forced to give up their jobs at 40% higher rates of job loss, even though they were already discriminated against to start with in terms of getting jobs. And we’ve seen this in Latin America and sub-Saharan Africa, too. So, without specific protections designed to make our economic system more gender-just, to provide basic social protection, when you have a pandemic like this, it’s going to hurt women more, everywhere.

JUAN GONZÁLEZ: And the 10 richest men in the world, according to your report, have seen their combined wealth increase by half a trillion dollars since the pandemic began?

PAUL O’BRIEN: Yep. And just to put that in context, that’s enough to vaccinate everybody on the planet Earth to get rid of this pandemic. And that’s just the profits they’ve made during the pandemic, the additional moneys they’ve made. And, of course, yes, it would be a good thing if they all sat around a dinner table and said, “You know, we’ve made this extra money. We had enough to start with. Let’s get rid of this pandemic.” But, of course, our economic system can’t rely exclusively on their largesse. What we are not doing is articulating and then passing the legislation that turns that from a voluntary philanthropic exercise into something they are required to do.

AMY GOODMAN: And what would that look like, Paul? We have 15 seconds.

PAUL O’BRIEN: Well, I wrote a book about it, so Power Switch. We’ve got a Biden and Harris administration. It can’t just normalize. They’ve got to pass a range of policies economically, in terms of social protection, that require corporations and the wealthy to pay their taxes and get that money into the system, so that people have the social protection and economic opportunity they need to lift themselves from this pandemic.

AMY GOODMAN:* Paul O’Brien, we want to thank you so much for being with us, vice president of Oxfam America. We’ll link to the new report, “The Inequality Virus: Bringing together a world torn apart by coronavirus through a just, fair, sustainable economy.”

A very happy belated birthday to Charina Nadura. I’m Amy Goodman, with Juan González. Remember, wearing a mask is an act of love. 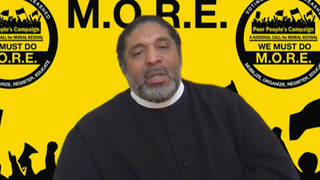